In recognition of Dia de los Muertos, a holiday to remember friends and family members who have died, the Orange County Sheriff Coroner is remembering some of their unidentified decedents from over the years and requesting the public’s assistance to get them identified.

“We are always working toward learning who our unidentified are. We never forget them and never give up on these cases,” said Kelly Keyes, Supervising Deputy Coroner.

The Orange County Coroner regularly reviews unidentified decedents in the hope that new information might be discovered and lead to successful identification.

“In some cases, years or even decades can pass before new information becomes available that might help us identify these decedents,” Keyes said. “It’s beneficial to regularly remind the public that we actively work these cases and that it’s never too late to explore new leads.”

The OCSD Coroner Division is looking to identify:

Jane Doe was found Jan. 31, 2006 off Ortega Highway in Trabuco Canyon. She is estimated to have been 25-35 years old. She was 5’1” tall and weighed 113 pounds. She is suspected to be a Hispanic female with medium-to-long black curly hair, dark complexion and brown eyes. She had a small scar underneath her belly button, and a tattoo of a rose with a web-like design on her left forearm. She was wearing jeans and a black shirt with a white floral design. She had acrylic French-tipped fingernails with a small heart on each nail tip. Findings at autopsy suggest she had a prior cesarean section. Case No. 06-00704-KI.

Jane Doe was struck and killed by a vehicle in Stanton at about 9:05 p.m. on Sept. 11, 2005. She was taken to West Anaheim Medical Center, where she died. She is believed to be a Hispanic female, 19-30 years old, 5’3” and 165 pounds. She had a dark complexion, long black curly hair with a reddish tint, and brown eyes. She had a faint scar to the left inner ankle and a single freckle or mole on the left wrist. She was wearing blue shorts, a black tank top with “Baby Girl” in sequins and gold leather flip flops. She carried a small black purse that contained a CD of a Puerto Rican Reggae band, multiple receipts from the Buena Park Mall, and a one-day bus pass purchased in Norwalk. Case No. 05-06717-HO.

John Doe was struck and killed by a vehicle Feb. 15, 2000 on W. 1st Street in Santa Ana. He was taken to a local hospital and died shortly after. He was estimated to be Hispanic, 40-55 years old, with short dark-brown or black hair and brown eyes. He was 5’4” and 151 pounds. He had a scar under his chin and there was a mass above his front teeth on his jawbone. He had several missing teeth and those remaining showed heavy wear. He had prominent cheek bones and a wide nose. He was wearing navy blue slacks, a black belt, a pair of black “Pro Wing” shoes, a light gray Christian Dior button-down shirt and black socks. Case No. 00-1155-AO.

John Doe was found dead on Aug. 28, 1993 on bike trail in east Anaheim in an apparent suicide. He had been deceased only a short time before he was found. He was estimated to be 30-45 years old and possibly Hispanic or Middle Eastern. He was just over 5’ and 146 pounds. He had curly black hair and a prominent nose with thick dark eyebrows. He was wearing a short-sleeved golf-type shirt, tan pants, white athletic shoes, a tan belt with brown leather buckle, and a Casio watch with a silver band on his left wrist. Case No. 93-05228-EY.

John Doe was found Dec. 5, 1986 at the 5 Freeway overpass at Harbor Boulevard in an apparent suicide. He was estimated to be a 25-35 year old Hispanic male, 5’6” and 136 pounds. He had curly black hair and hazel eyes. He had a prominent nose with prior dental work. He had scars on his right shoulder and right nipple, and recent cuts to the left inner forearm. He was wearing a long-sleeved tan button down shirt, brown corduroy pants, and white athletic shoes with red lettering and covered in red and white paint. He had a single key with a Smurf keychain. Case No. 86-05561-HA.

People with any information on any of these decedents are asked to contact the OCSD Coroner Division at 714.647.7400. Anyone with any long-term missing relatives can file a report with their local police agency.

Additional unidentified decedents, dating back to the 1960s, can be viewed online here. 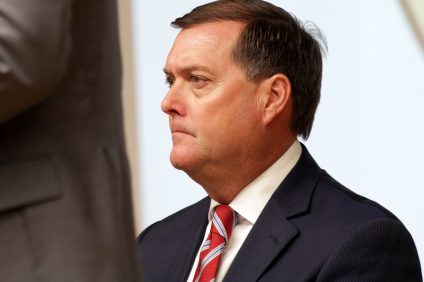