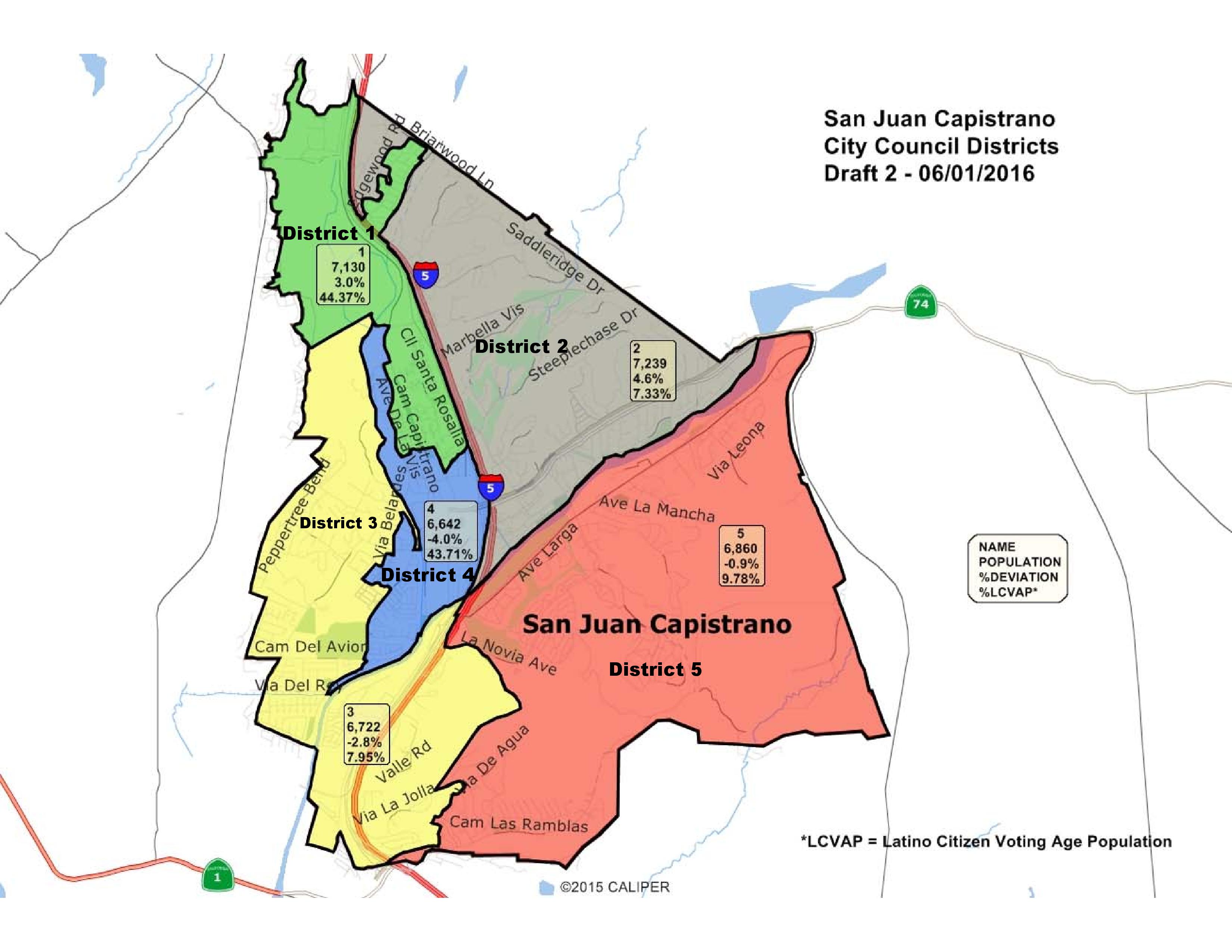 Shown above is the final map of San Juan’s new district boundaries, created after demographers received input during community forums and City Council meetings. District 1 (shown in green) will be one of two districts voting for a Council candidate this November. Image: Courtesy of the City of San Juan Capistrano

The San Juan Capistrano City Council voted on June 6 to approve the city’s five new election districts, while also confirming that District 1 will be one of two districts voting for a City Council candidate on Nov. 8. However, due to a tie vote, the second district that gets to vote for a seat will not be selected until the Council’s next public hearing on June 21.

The city’s switch to district elections—which was approved unanimously by the Council in February—was prompted by a voting rights lawsuit filed against the city in January claiming San Juan’s at-large elections violated the California Voting Rights Act of 2001 and resulted in vote dilution for the Latino residents. Following the direction of City Manager Ben Siegel and City Attorney Jeffrey Ballinger, the City Council commenced with the transition and hired a demographer.

After a handful of community forums and public hearings, the demographer used input and Census data to construct a map of five voting districts, which was approved 3-1—Councilman Derek Reeve dissenting—on Monday.

The city’s stipulated agreement with the plaintiffs of the Voting Rights Act lawsuit dictates that the two expiring Council seats of John Perry and Sam Allevato will be up for election on Nov. 8, with the other three seats up for election in November 2018. This means residents in only two of the five districts will vote this November.

Per the agreement, the district with the highest percentage of Latino voters—44.37 percent in District 1 (shown above in green)—will vote in November for a candidate that lives within that district.

The Council disagreed over which would be the second district to elect an official. Mayor Pam Patterson and Mayor Pro Tem Kerry Ferguson chose District 5, saying it would offer balance with its southeast location. Reeve and Allevato wanted the selection to be randomized so as to avoid the appearance of bias or political conspiracy.

With Councilman John Perry absent and a 2-2 vote, the Council was forced to continue the item to June 21. Residents are encouraged to attend the June 21 public hearing, which begins at 5 p.m. at City Hall, located at 32400 Paseo Adelanto. For more information, visit districting.sanjuancapistrano.org.