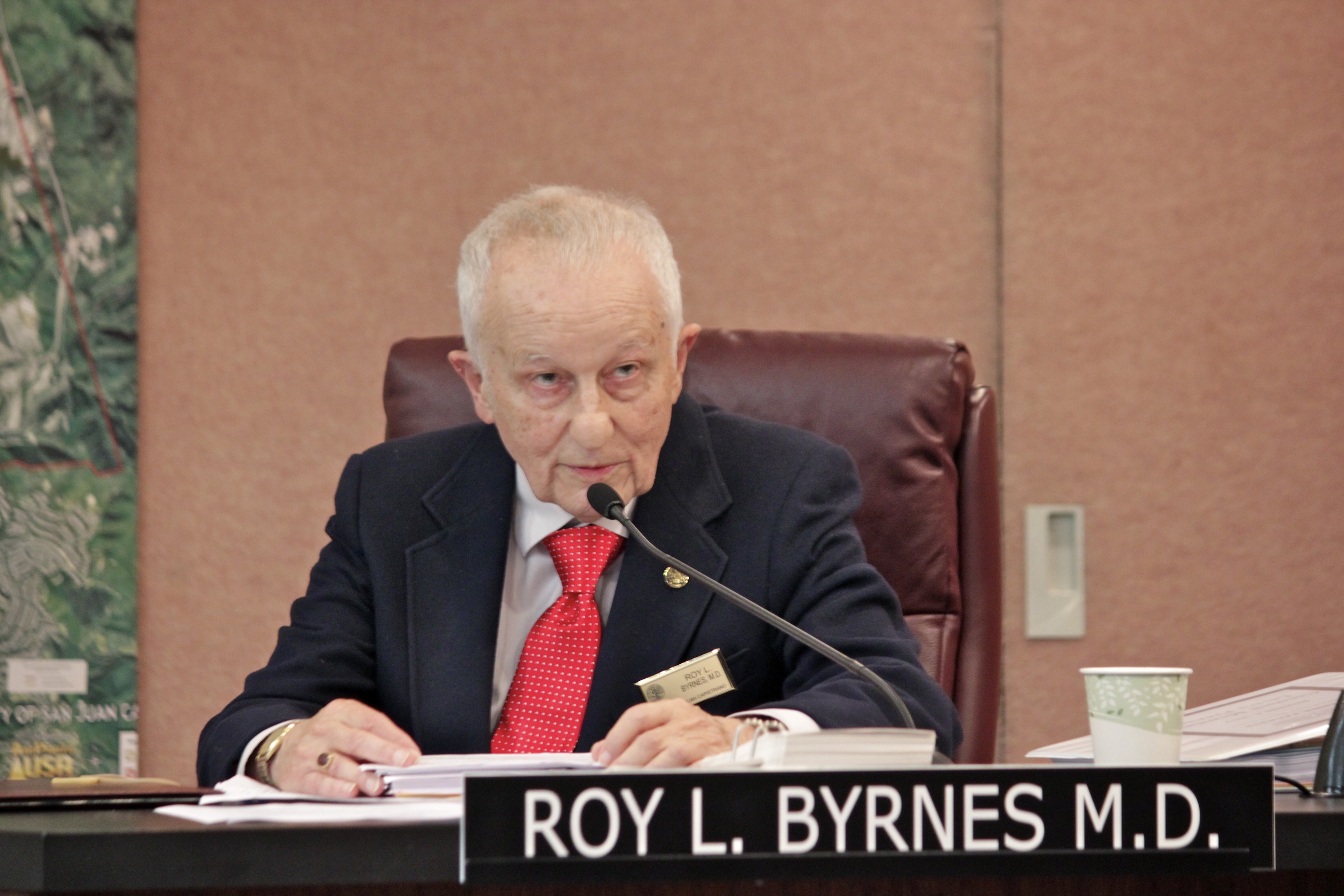 Councilman Byrnes Apologizes but Re-affirms Comparison of Colleagues to Dictators

“If I came up perhaps too emotionally or too steadfastly, then certainly you are due an apology,” Byrnes said to Allevato and Councilmen Larry Kramer and John Taylor. “All I can do is say, as sincerely as possible, that I do not think of you as Nazis. What I saw, and in my mind, was our government following the same pathway as what I had seen in pre-Hitler Germany.”

Byrnes compared the three men to Hitler, Italian dictator Benito Mussolini and “a meeting of the Klan without the burning cross or the white hoods” during the council’s meeting on Feb. 4, after learning that the trio, along with Allevato’s supporters, had stood behind recall petition gatherers in front of a Vons supermarket on Jan. 19.

The recall supporters have until March 7 to gather 3,503, or 20 percent of San Juan’s registered voters, to enact a special election.

Although he apologized to anyone who was offended by his comparison, Byrnes also referred to Allevato and his supporters as a “goon squad” and likened them to Hitler’s brown shirts, members of the Nazi Party that helped the dictator rise to power by intimidating opposition groups.

“In my mind, it was not similar. It was identical,” Byrnes said. “I was determined not to remain silent in the face of what I consider and what I believe was … official street intimidation by government.”

Byrnes’ statement followed demands for an apology from the three councilmen, as well as several residents who came up to speak.

Allevato, reading from a prepared statement, said Byrnes had “impugned the character” of Kramer, a retired captain in the U.S. Navy’s submarine force, and Taylor, who served in the Peace Corp. Allevato said he was personally offended by Byrnes’ reference to Mussolini because of his Italian heritage. He told the story of his father, an American-born citizen who lived in Italy during the dictator’s rise to power and was forced to flee back to the U.S.

“Your horrific references and characterizations of Councilmember Kramer, Councilmember Taylor and myself to tactics used by Fascist and Ku Klux Klan regimes are both insulting and a degradation of the decorum and reputation of this council and of our city,” Allevato said.

Kramer said Byrnes had “gone a step way too far.”

“My first reaction to the night was just plain shock. I couldn’t believe what you were saying. Then I got angry. Now, I’m just plain sad,” Kramer said.

Allevato also mentioned that Byrnes’ comments were said in front of a local Boy Scout troop that had attended the meeting to observe the council, as well as local resident and WWII Purple Heart recipient Les Blair, who was in attendance because the city had declared February as Purple Heart Month.

Among the residents who spoke was 94-year-old Bill Hardy, a WWII veteran fighter pilot and ace.

“I’m very disappointed of what I read and heard from my neighbors,” Hardy said. “If anybody comes up with inappropriate comments or behaviors, stop them right then. Don’t let it get out of hand like it is now. A lot of us are embarrassed to be citizens of San Juan, after we hear everything that’s going on now. I think it has to stop.”

Before apologizing, Byrnes was interrupted midway through his comments, after Allevato grew visibly frustrated and called for a 10-minute recess. As the three councilmen stood to leave, with Councilman Derek Reeve absent, Byrnes insisted on continuing.

The discussion was not the first time in recent months that the Nazi Party has been mentioned in the council chamber.

In December, resident Ian Smith criticized Allevato for a personal email correspondence, in which former council member Laura Freese referred to recall supporters as Nazis. In the email, Freese sought Allevato’s opinion on a letter she was writing to The Dispatch. Allevato praised the letter but suggested she focus on the merits of the recall. Freese’s letter was ultimately published without the reference.

Smith demanded Allevato repudiate Freese’s use of the word and reject her support. He also said he was personally offended because he and his mother were survivors of the London Blitz during WWII.

Byrnes, who said he was “a little surprised but not overwhelmingly so,” called Tuesday’s discussion a “public hanging.”

“If you’re going to hang me, go ahead,” Byrnes said. “I did wrong perhaps in mentioning the Nazis and the KKK, but the behavior exhibited on the 19th of January was unacceptable.”