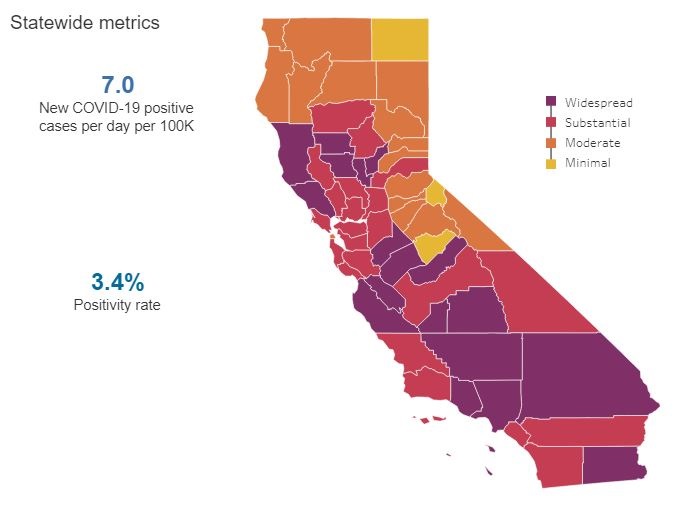 By Shawn Raymundo and Zach Cavanagh

Orange County will remain in the red “substantial” tier on California’s color-coded COVID-19 monitoring system for at least a few more weeks, as the latest data the state’s health office released on Tuesday, Sept. 29, showed a slight uptick in new daily cases.

For about the past two weeks, the county’s metrics on new daily cases and test positivity rate met the qualifications to enter the orange “moderate” tier—the third-highest of four state risk levels—allowing certain economic sectors to expand services.

Last Tuesday, Sept. 22, the county had 3.6 new COVID-19 cases per 100,000, with a 3.1% positivity rate, marking the first time the county had met the orange risk level in both metrics. However, the county’s daily case rate rose to 4.4 on Tuesday, while the test positive rate remained at 3.1 %, resetting the two-week clock before the county can move to orange.

The state mandates that counties must remain in a tier for a least 21 days. To move to a lower tier, the county must meet both of that specific tier’s metrics for two consecutive weeks. If the county has met those metrics for 14 consecutive days when the 21-day waiting period has passed, it can move down to the next tier.

However, if there is a spike and the county’s numbers increase to purple-tier levels for 14 consecutive days, Orange County could be moved back to the widespread tier—the highest-risk level.

In early September, the county was downgraded from the purple “widespread” tier to the red “substantial” tier, lifting restrictions on some economic sectors, including restaurants and movie theaters.