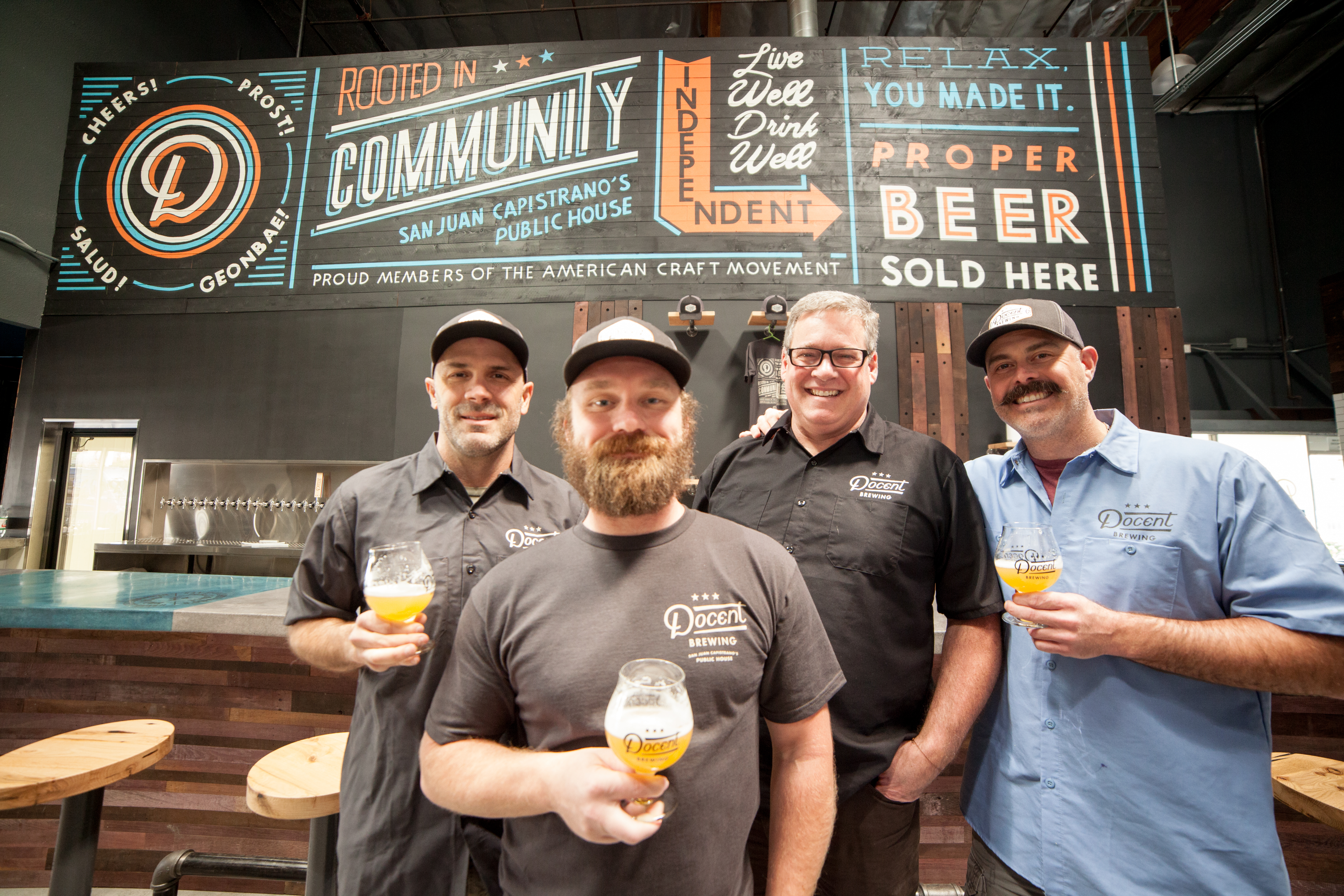 As the oldest community in Orange County, San Juan Capistrano has its fair share of docents. Some don the iconic uniform of a red jacket and a black hat and show visitors around the tranquil grounds of the Mission. Others guide groups of residents and visitors each weekend around the city’s historic architecture.

But you won’t find San Juan’s newest docents in a museum or an art gallery. They’re working on opening a new public house, where they’ll guide each patron through experiencing and appreciating a glass of fine craft beer.

Docent Brewing, self-dubbed “San Juan Capistrano’s public house,” is set to open next month, with the goal of encouraging residents to get to know their neighbor and beer maker.

The city’s first full-fledged brewery is the brainchild of San Juan Capistrano residents Joe Wilshire and Brian Hendon, and Laguna Beach resident Scott Cortellessa. The three friends met years ago via family connections, and it didn’t take long before they realized they had a common love of craft beer.

After many a campfire conversation, the trio decided to turn their dream of brewing their own craft beer into a reality and began the planning process almost five years ago. They executed a lease on a large space off of Calle Aviador in October 2015, but it wasn’t until Oct. 1, 2016 that they were able to finally begin working on transforming the empty space into a brewery. Led by Docent’s head brewer Bryan Giesen, of Laguna Niguel, their first batch of beer was brewed on Feb. 12.

“It’s been nonstop for five months,” Wilshire said. “A lot goes into creating a manufacturing facility.”

Wilshire said they chose San Juan to open shop not only because it’s their home, but because they knew their vision for a true public house would be embraced in a small town with a tight-knit community.

Cortellessa and Hendon are also avid mountain bikers, so the fact that the brewery sits right up against the San Juan Creek Trail was an added bonus.

For Giesen, who grew up in Orange County’s beach cities and is a Dana Hills High School alum, this is his first professional brewing gig—he got his start brewing in his backyard. Giesen said he’s especially looking forward to bringing great craft beer to the communities he calls home.

“That’s another reason why this is so special to me—I get to serve my neighbors and friends,” Giesen said. “I can’t wait to run into people I’ve known forever and pour them some beer.”

The Docents of Beer

Initially inspired by Giesen’s signature Docent Petit Saison, the group finally landed on the name after finding that it also held a lot of meaning in terms of what they were setting out to do.

By definition, docent means a college or university teacher or lecturer, or a person who leads guided tours, especially through a museum or art gallery. But the owners of Docent Brewing are expanding that definition by adding your local brewer in there.

“We want to be here to help people, either introduce them or continue to grow their love of craft beer,” Cortellessa said. “We want to be a kind of beer guru, too.”

Cortellessa said the three main pillars of Docent are being community-driven and connected to the American craft beer movement, focusing on the craftsmanship of their beer, and maintaining independence as a small operation run by a group of friends.

While the brewery could have easily gotten lost in its own spaciousness, the owners have worked to create what they describe as a coffee house vibe, complete with vintage furniture finds and homey décor. They’ll have a kitchen, WiFi and will allow guests to linger as long as they please.

“This is San Juan’s public house, meaning we want this to be the third place in your world,” Cortellessa said. “You’ve got work, and you’ve got home, but this is a place to meet friends and family, get some work done, or socialize.”

And much like the sense of community they hope to foster at the brewery, their beers will also aim to reflect a feeling or a sense of place—like an ale perfect for campfires or a crisp beer to grab after a bike ride.

“We’re going to make all styles and not really focus on any particular style for the most part,” Hendon said. “That’s the approachable part. You can probably come here and expect to find your new favorite.”

“… but we’ll definitely have our fair share of IPA’s.” Cortellessa assured with a laugh.

The group said they anticipate opening the brewery to the public early next month.

Whether by car, bicycle or foot, they hope you’ll stop by and say hello to your local brewer.

How did you get into brewing beer?

I started home brewing probably 10 years ago, and it was just one of those things where you enjoy something and you want to learn how to do it. And it clicked immediately. I had early success in competitions and that got the fire burning. I was lucky enough to have some great support from friends—people at O’Shea’s in Laguna Niguel, Trevor Walls at Pizza Port, Matt Becker, who works at Packing House. They have a huge knowledge of beer and are wonderful guys in general. It’s a great community—everybody’s really willing to help and listen to stupid questions and answer them. I fell in love with that whole process. I kind of pinch myself brewing here every day, that this is my job now.

What’s your philosophy when it comes to brewing?

If I had a philosophy, essentially, it would be that beer is a wide spectrum. All the flavors and colors and aromas that encompass the word “beer” lend themselves to inclusion. To me, beer’s always been the beverage of community. So if you’re gathering with friends, the first question is, where are we gathering, and the second question is, who’s bringing the beer? So, hopefully we’re answering both those questions for you here.

How many styles of beer will you be serving up?

We’re hoping to open with six off the bat, and there’s going to be six in the tank. So as soon as we can turn ‘em around, they’ll be out for consumption for you guys. The point for us, I think, will always be to have a range of styles—to have something for maybe the novice who doesn’t know beer that well, and obviously we’ve got to have something for the hop lovers, and the beer geeks will have a place here as well. Somebody’s going to enjoy every tap.

Exactly how much beer are you brewing?

At a time, I’m making 15-barrel batches, which is 465 gallons of beer—quite a bit more than I was making in the backyard. That equals about 40 kegs, or half-barrels. So we need thirsty people to come help us with that.

So … do you have a favorite?

I couldn’t choose a favorite among my kids! There’s a time and a place for everything. When I started home brewing and really getting into beer, it was always how far can you push it, how hoppy can you get, how much alcohol can you put in it. And then over time, you start learning restraint and the art of subtlety, and that’s what excites me now. I love a 5 percent beer that has character. That way, you can have a few. There’s a time and a place for almost any style. I’m not a snob about it—I like drinking light beers in the summer and big dark stouts when it’s cold out.

The goal is to make the perfect version, in my world, of every style of beer I enjoy drinking. That’s probably the goal of most brewers, but there are no obligatory taps on the wall. Every beer has intent, every beer is thought out, and I’m trying to contribute something.

Are you seeing an influx of interest in craft beer in South Orange County?

Oh yeah, it’s been happening for a while now, more acutely in the last five years. But now, within the last couple years, you see people with a lot more knowledge than they used to have. And that’s great, because five to eight years ago, nobody was drinking IPA’s, and now people are drinking barrel-aged sours. So it’s like, what other crazy beers can we throw at them?

It’s sort of a new frontier for some, but I think a lot of people are a lot more familiar with their options now. And obviously if you look at the grocery store shelves, you see the tide turning where most of the shelves today are taken up by small craft breweries from all over the country, instead of just a little corner, and that’s great to see. People are developing their palates and getting excited about new flavors, and brewers are pushing the envelope and making great beer, so it’s an exciting time to be a beer drinker for sure. And it’s an exciting time to be around here, with all the new breweries—our neighbors Artifex, Lost Winds and Pizza Port in San Clemente, and The BrewHouse in San Juan, where people can go try all those different beers.