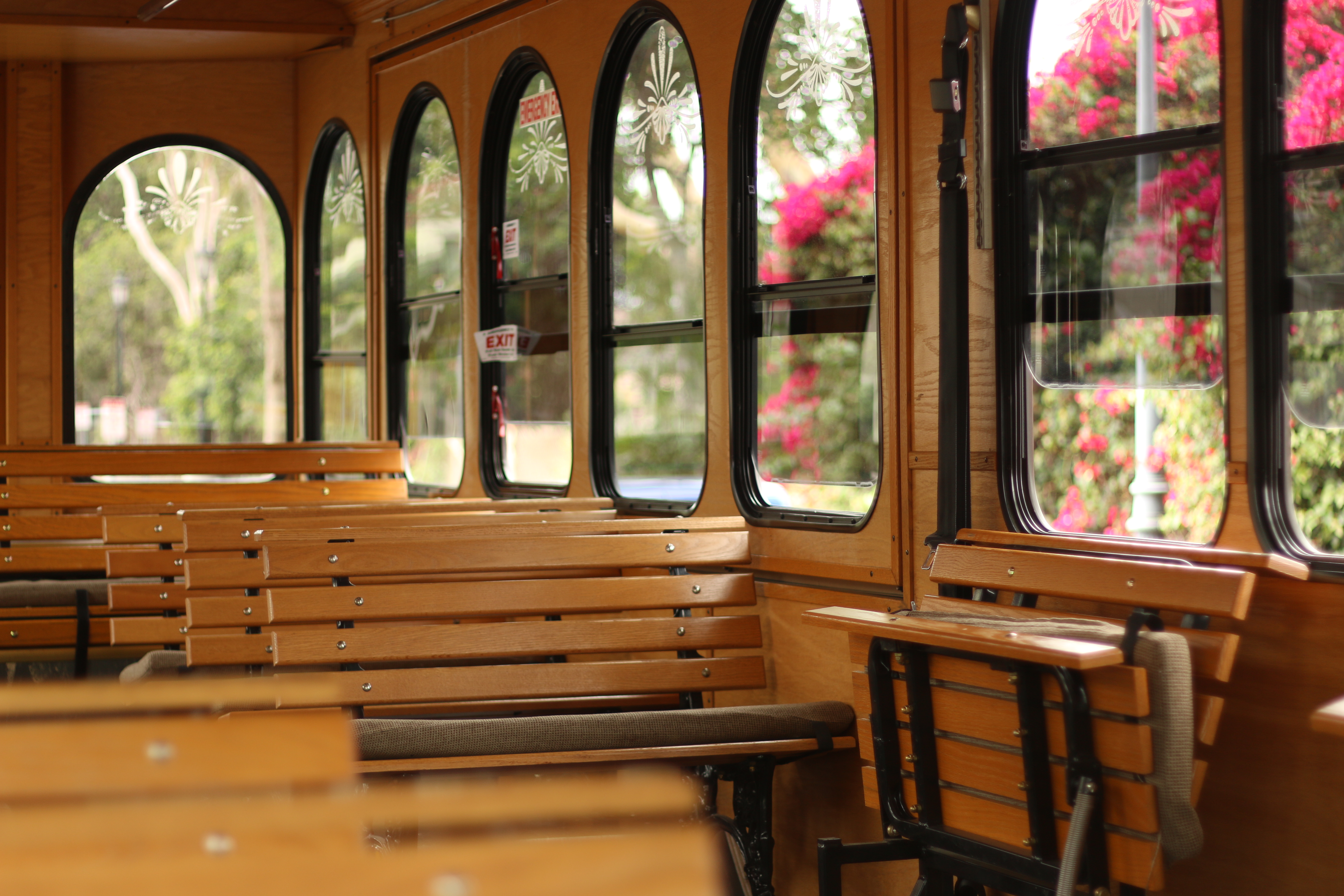 Claiming a piece of its own San Francisco nostalgia, the city of San Juan Capistrano set its sights on bringing a free weekend trolley to town, and today that vision became a reality. The glossy red-and-green-coated streetcar rolled to City Hall Thursday morning, its wooden slatted seats ready to take passengers to and from downtown San Juan.

The proposal for the summer trolley originally went before City Council on March 17, with City Engineer George Alvarez presenting several options for leasing a trolley from the city of Brea. Council members agreed on leasing a trolley mid-June through September and gave city staff direction to move forward with a lease agreement. Unlike the tri-city trolley program that has been explored in the past, San Juan’s summer trolley only serves stops in town.

In order to fund the trolley, $66,276 was used from the city’s Air Quality Management District Fund, and $3,680 was allocated from the General Fund, totaling $69,956. Alvarez said AQMD funds are often used for transportation and air quality projects such as traffic light synchronization and other traffic alleviation projects. 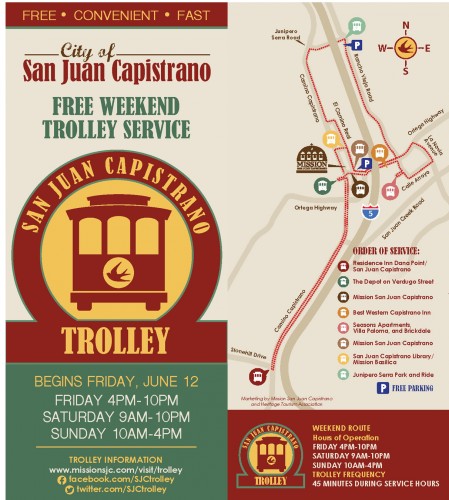 The San Juan trolley, which can hold about 30 passengers at a time, will run from June 12 through Sept. 5, with the exception of the period between June 30 and July 5 when the trolley will return to Brea. The city has said it will contract for shuttle services for the July 4 weekend.

The weekend trolley, which makes 10 stops in and around downtown, is scheduled Friday from 4 p.m. to 10 p.m., Saturday from 9 a.m. to 10 p.m. and Sunday from 10 a.m. to 4 p.m., with additional rides during the San Juan Summer Nites Concert Series. The average route is 45 minutes in length. The Friday/ Saturday route connects eastern San Juan to the downtown area and includes stops at the Marriott Residence Inn. The Sunday route excludes the Marriott, but instead provides transportation to the Rancho Mission Viejo Riding Park during its summer events.

Councilwoman Kerry Ferguson, who has been a major proponent of the trolley, said the longest wait for a passenger would be about 45 minutes. Trolley signs are also posted at each stop with a list of all the stops in order. In order to get the word out about the free service, Ferguson said the majority of the marketing was provided by the Heritage Tourism Association and Mission San Juan Capistrano.

“One of the best parts of the routing that has been devised is that once a person steps onto the trolley, either at their original point or at a point downtown, the distance and time to their destination will be quite short,” Ferguson wrote in an email. “Our trolley program is an investment in our downtown, something that is needed for sure.”

The city is hoping for at least 10 riders an hour during this summer’s trial period. City staff said achieving that kind of track record is needed in order to help secure Orange County Transportation Authority funds for future trolleys.

Ferguson said having enough riders every hour will also allow the project to expand to “outlying neighborhoods and eventually connect with Dana Point and San Clemente.”

The city of Dana Point begins its own shuttle service on Friday, June 26, offering riders a free lift around town and connecting access to the city of Laguna Beach’s trolley service, on Friday, Saturday and Sunday, initially through Labor Day, Sept. 7. San Clemente is also looking add its own trolley service. During a San Clemente Mobile Task Force meeting on Monday, participants discussed the possibility of tapping into Orange County Transit Authority grant funds for implementing a trolley system in San Clemente.

During the council’s April 7 meeting, Councilman Sam Allevato voiced concerns about the trolley, noting the lack of success the city’s horse-drawn carriages had in 2013.

“I hope I’m proven wrong,” Allevato said. “This is a nice idea, but we tried it before. We had a horse-drawn wagon that operated on weekends and couldn’t make a go of it. It’s $69,000 of taxpayer money, and we’re using taxpayer money to move people around or out of downtown. I just think it’s counterproductive to our vision for downtown as a walkable area.”

Ferguson disagreed with Allevato’s assessment, saying it will help with parking problems and connecting residents across the freeway to the downtown area.

“I don’t see it as being detrimental to the walking at all,” Ferguson said.