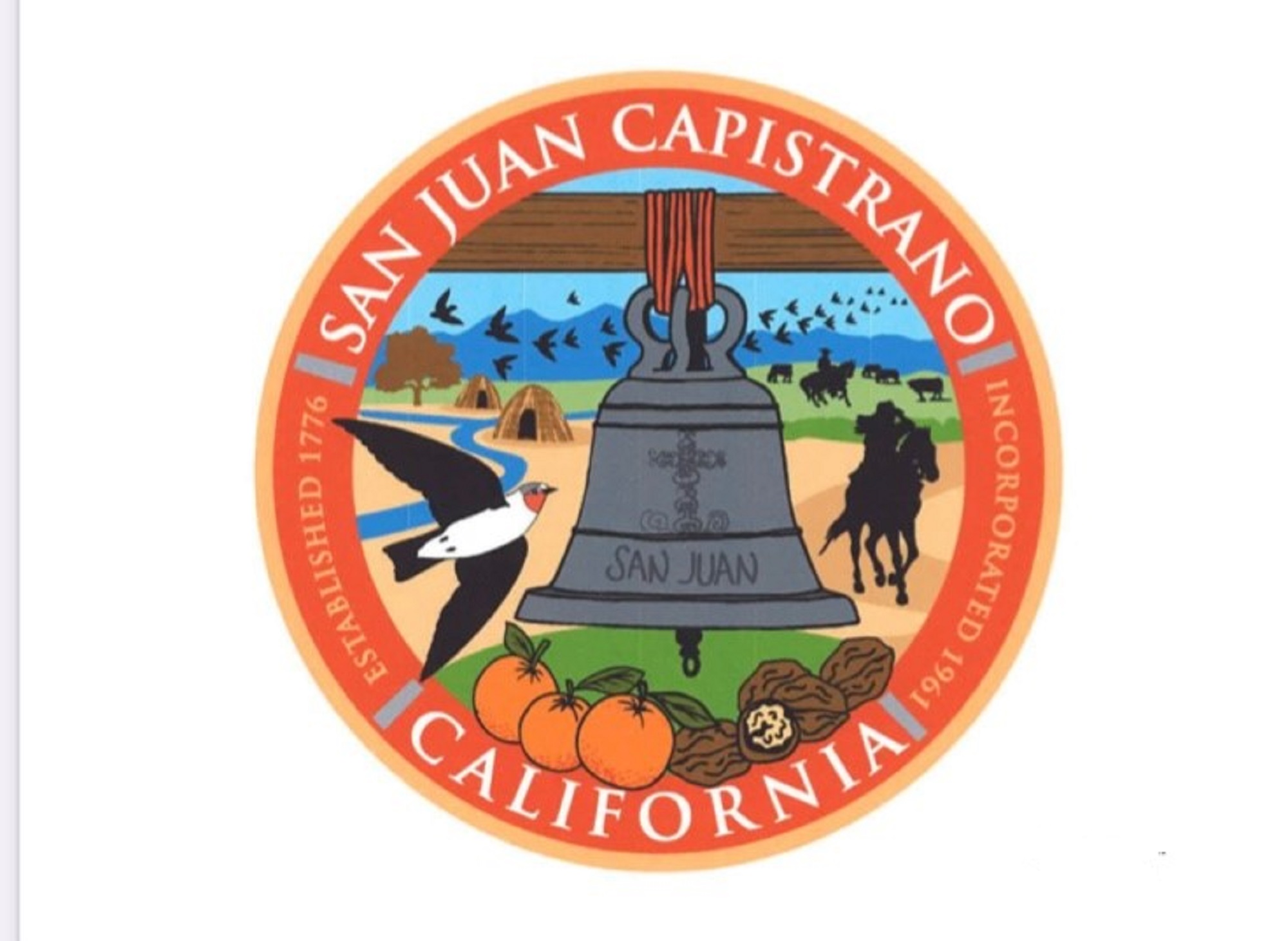 It appears the city seal of San Juan Capistrano will likely have a new design adopted soon—one that will no longer feature Father Junipero Serra, who founded the city’s Mission and is revered by some residents as instrumental to the town’s founding.

The City Council—specifically, Councilmembers Troy Bourne and Sergio Farias—initiated the move for a new seal design in December due to a wish for a simpler design that will show up better on a smartphone. However, Serra’s history of interactions with Indigenous people has come under scrutiny in recent times—controversy that has been alluded to during tense council discussions earlier this year. Serra is currently depicted on the city seal hugging an Indigenous boy, a design that is on the Council Chamber wall and featured elsewhere around City Hall.

Commissioner Lorie Porter made the initial recommendation for Gavin’s design, and said Gavin is a friend.

“I do like Kimberleigh Gavin’s depictions,” Commissioner Jan Siegel said. “I think she is an excellent artist. I do like this one, if it’s cleaned up. I do think this one is too busy, as Commissioner Porter said.”

The recommendation comes with suggested design changes from commissioners, including removing the numerous swallows in the background, rendering the design of the horse rider gender-neutral and reducing the size of depicted oranges and walnuts.

“I would like the city to work with her and see what she could do, because I think she has the right idea in what the seal should look like,” Siegel said.

Design requirements issued by councilmembers mandate the new seal must depict a swallow and aspects of both Mission San Juan Capistrano and Native American culture. Specifically, Mayor Derek Reeve requested a split-tale swallow in the design.

“I still don’t understand why we’re stuck on the split-tale swallow, which is the wrong swallow. It’s the Mission brand, but it doesn’t fit. The Mission has a different reason for doing it,” Siegel said. “It has nothing to do with the history of the town. It has to do with how people all over the world view swallows. … The Mission has decided to use the brand because it’s more common. I understand that. Their audience is beyond San Juan Capistrano.”

“There were so many well thought-out and drafted seal proposals, but I do think between Rick Morgan and Kimberleigh Gavin, they were able to capture in—a snapshot—what we’re looking for to represent our city, whether it’s the Mission or the swallows, our equestrian history, our Native history,” Lopez said. “There are some modifications that can be made, such as the swallow amount, but I do think it’s a beautiful seal.”

Commissioner Anna Dickinson said she was disappointed with the number of required design elements since the initial stated reason for a new seal was to streamline it for mobile devices. Dickinson also said she did not have a favorite among the 34 submissions.

“We did a disservice at a previous meeting by adding additional items into the proposed seal, and that is the reason we received so many busy, complicated seals—not giving us the opportunity to have numerous great seals to choose from,” Dickinson continued. “If we don’t take a seal proposal back to the City Council that they approve of, we’re going to get the seal that was previously approved.”

The previously approved design Dickinson referred to—which was suggested by Bourne and Farias—features a black-and-white Mission bell. That design will be the de facto new seal if another design is not accepted by councilmembers.

Dickinson eventually went along with the unanimous commission recommendation on Tuesday, though added she was doing so reluctantly.

Discussion on, and the possible selection of, a new seal design is expected to come before the City Council during a meeting on Tuesday, Aug. 2. The meeting will begin at 5 p.m. and be held at City Hall, 32400 Paseo Adelanto. The public can either attend in person or watch a live-streamed video online through the city website, sanjuancapistrano.org.