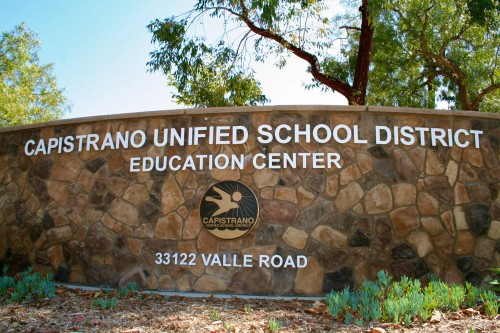 The Capistrano Unified School District Board of Trustees approved an agreement with the teacher’s union Wednesday, but only after a contentious debate in which one trustee sought to table a final decision until district staff could find a way to restore a full school year.

The agreement with the Capistrano Unified Education Association reinstates two instructional days to the calendar—going back up to 177 days after budget cuts forced a decrease to 175 days last year—and restores a portion of teacher pay. The agreement also begins to bring down class sizes, although parents who spoke before the board said they would like class sizes to decrease further and a full 180-day school year brought back before teachers receive pay restorations.

Trustee Jim Reardon said he was supportive of the agreement in principle, but wanted to see the district make an attempt to find $2.8 million in funds he estimated would be necessary to restore the additional three instructional days. The district, he said, had been given new flexibility to possibly do so, thanks to an increase in state funding and more local control over finances.

Board President John Alpay said what Reardon was proposing was “a first,” and essentially told staff their work negotiating the contract had been for naught.

“I can’t help but feel it’s motivated for not altruistic reasons,” Alpay said. The board president said Reardon could have voiced the goal at earlier meetings, rather than allowing district staff to negotiate under a different set of goals. “I can’t help but feel this is political gamesmanship.”

Board Vice President Lynn Hatton agreed with Alpay and said she hoped a full school year could be restored next year, but also expressed concern that the short time given to district staff to find the funds could sacrifice programs.

“I look at this agreement as a positive step forward,” Hatton said. “We’ll be back to 180 days next year, I’m sure.”

She also noted the importance of training days being given over to the new Common Core educational standards, which, she said, would be a departure from the methods used after the passage of the No Child Left Behind Act.

Reardon said he believed staff would welcome a return to the full calendar, as would parents. Since approving the agreement would be tantamount to approving the 2013-2014 school year budget, he said, the change was necessary before voting for the contract. In response to Alpay, Reardon said he had made the case for a 180-day school year at budget committee meetings, which Alpay did not attend.

“I, for one, stand for a regular school year,” Reardon said. “I don’t think there should be shock about anything. I have a problem blowing into next year with last year’s budget.”

Trustee Ellen Addonizio, who seconded Reardon’s motion, said she was strongly in favor of a 180-day school year, and noted her support for trying to restore the full year previously.

She also told Alpay that accusing the other trustees of not acting altruistically did not help the discussion.

Superintendent Joseph Farley said district staff only had three weeks to work through the state’s new funding rules since they were signed into law. He told the board the district could be put in a difficult legal position with regard to the negotiations if the motion was passed.

The board ultimately voted 4-3 on a second motion, made by Alpay, to approve the proposed agreement, with Reardon, Addonizio and Anna Bryson dissenting. Addonizio and Reardon also dissented on another later vote to approve an updated school calendar that reflected the new agreement.