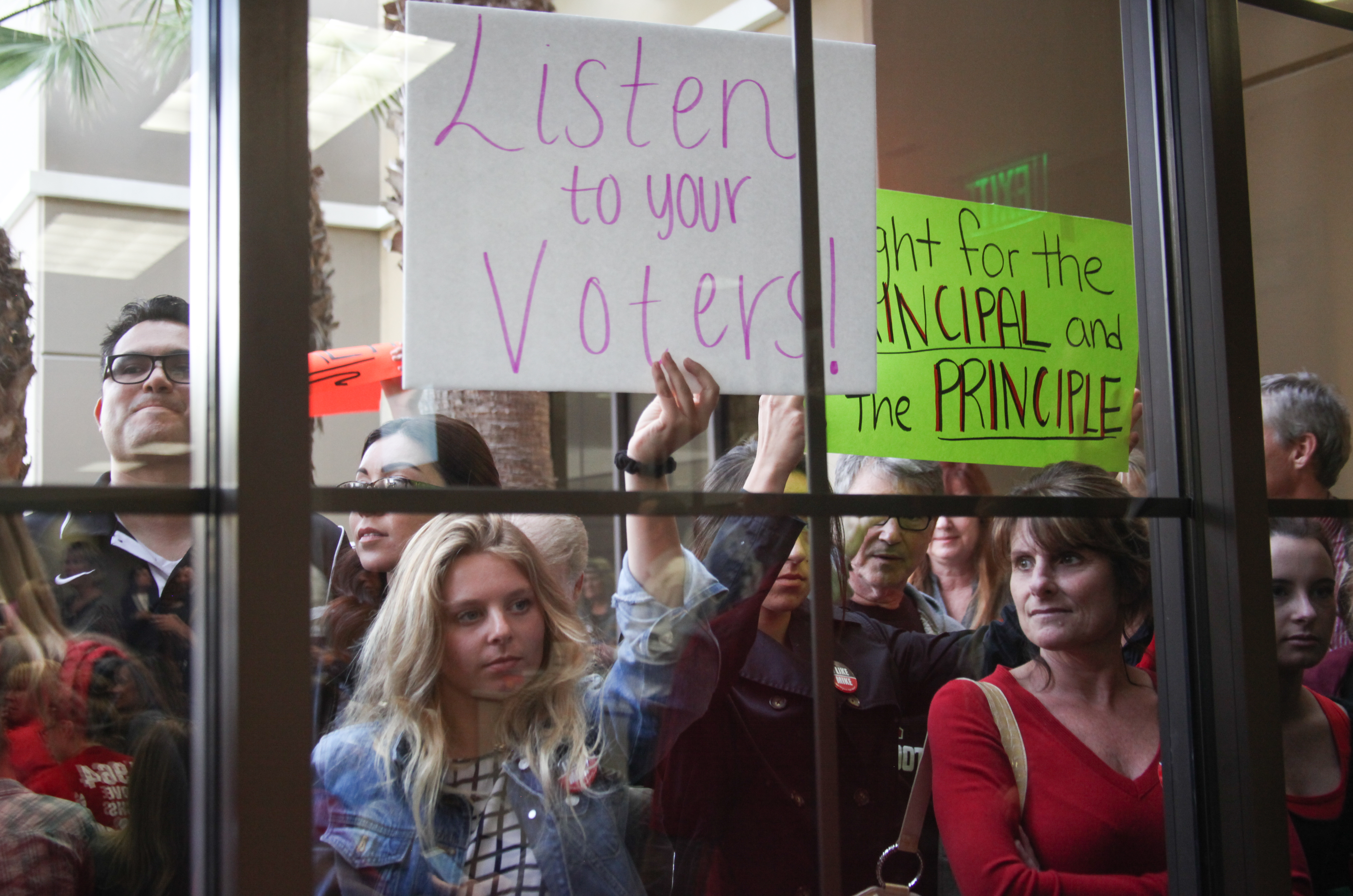 CUSD to Consider Authorizing Investigation into Firing of SCHS Principal

Hundreds of students, parents and faculty members were in attendance at Wednesday night’s Capistrano Unified School District meeting, many wearing the color red to support former San Clemente High School principal Michael Halt, who was removed from his position in March and left the school campus earlier this month.

Dozens of students and parents stood outside the board room Wednesday, wearing “I Like Mike” buttons and stickers and holding signs with messages of support for Halt—“Listen to Your Voters” “We Want Our Principal Back” “Shame on You CUSD” and “Reinstate Mike Halt.”

Parents, staff and students are largely still wondering why Halt was let go from his post as SCHS principal—the district’s policies prevent district personnel from publicly discussing personnel matters. Because Halt came from outside the district, he was subject to a two-year probationary period before a decision could be made on his future employment with CUSD. A release sent by the district indicated a decision had been made prior to March 15 to not return Halt to the post for next year.

Deni Christensen, the school’s assistant principal for guidance, will finish the year as interim principal, according to a district release. Current Aliso Niguel High School Principal Chris Carter, a San Clemente resident, will be the new permanent principal, effective at the end of the school year.

The CUSD board extended Wednesday’s public comment period, allowing all speakers to address the board for three minutes each. Over the course of two hours, students, staff and parents addressed the board with requests to invite Halt to graduation and to reinstate him as principal.

Discussion of Halt’s removal was not on the agenda Wednesday night, leaving board members unable to take actions beyond agendizing items for future meetings.

Following public comment and a couple board comments, trustee John Alpay requested to agendize an “independent investigation into the facts and circumstances surrounding Michael Halt’s personnel matters.” Alpay requested the discussion take place early at a special meeting, but did not receive a second to support the motion. The discussion was agendized for the May 27 regular meeting.

“The review should focus not only on the facts and whether the allegations asserted have any basis in reality, but whether the process was properly respected,” Alpay said. “The independent investigator should report directly to the board, have access to all files and materials, and ability to interview the parties.”