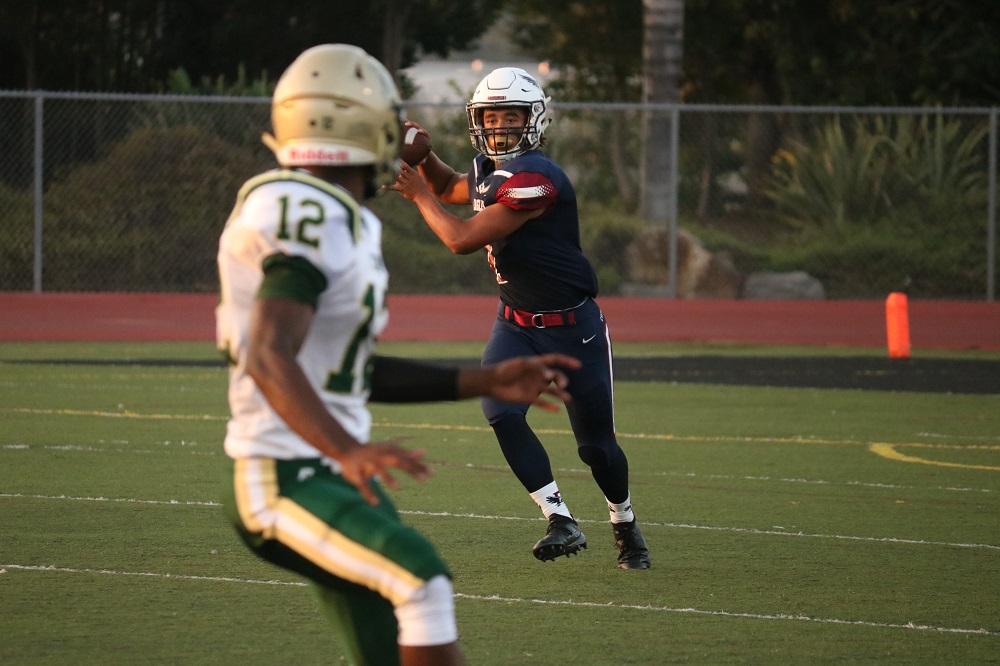 MISSION VIEJO – Capistrano Valley Christian would probably file its entire season opener in the “not how we drew it up” folder.

The Eagles’ first half score came off a broken play. CVC’s attempt to get a quick score before halftime turned into a go-ahead pick-six for St. Monica of Santa Monica. Their offense struggled until CVC had to put together a late game-tying drive.

But once CVC got its second chance with an overtime period, the Eagles made the most of it.

“It’s very encouraging,” CVC coach Rick Curtis said. “We lost several close games last year, and we won an overtime game. These guys had been through that before, and they don’t want to lose those games anymore.”

After a 3-7 campaign in 2017 that began with an 0-3 run, Capistrano Valley Christian (1-0) started 2018 off on the right foot. The Eagles host Riverside Prep next Thursday, Aug. 23 at Capistrano Valley High School.

The CVC offense struggled through most of the game, but the Eagles defense kept the game in striking distance.

Sophomore Peter Kelso pulled in an interception at CVC’s own 10-yard line in the first quarter, and senior Christian Harris recovered two fumbles in the second half.

CVC got on the board in the first quarter with a bit of a scramble. Tyler Henry mishandled a snap, ran to his left into a wall of defenders and pitched the ball to his right for his brother, Trey Henry, who took the ball 82 yards for the ice-breaking score.

St. Monica responded with a long touchdown drive to tie the game with 1:32 remaining in the half.

St. Monica grabbed the lead, 13-7, with a 30-yard interception return for a TD as the half expired.

“We tried to get one quick one, and they intercepted it,” Curtis said. “That one’s all on me. They responded at halftime. Got a couple stops, got a couple turnovers. Then our offense started clicking.”

Henry and Marton connected three times to jump start a fourth-quarter CVC drive. Jack Roberts got a couple strong runs before the Henry brother connection got another.

Tyler hit Trey on a wheel route to the end zone for a 31-yard, game-tying score with 1:33 to play.

Junior Joshua Sears got a sack in overtime to help stop St. Monica before the Eagles’ winning score.