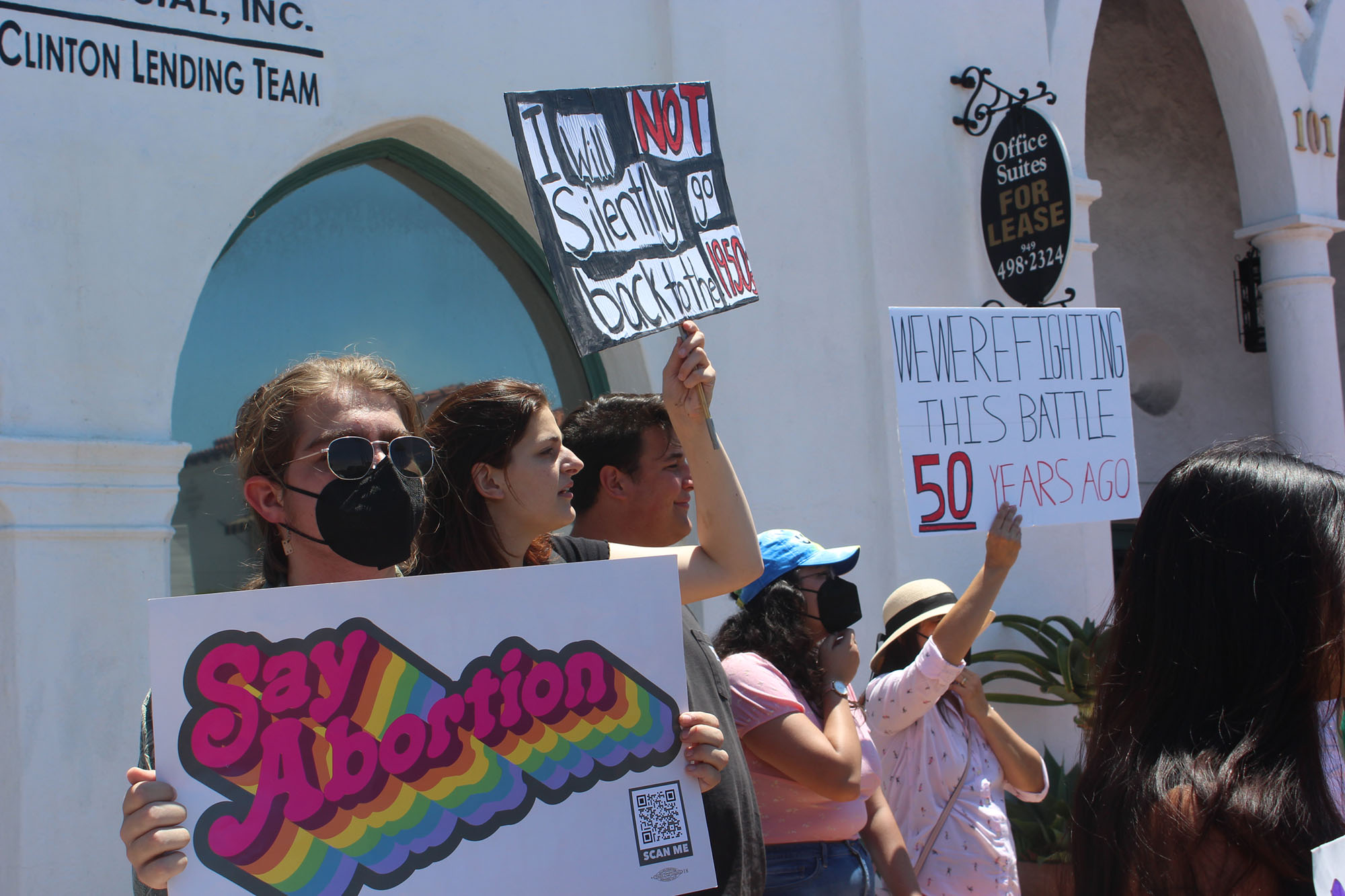 Around 11:30 a.m., demonstrators gathered on the corner of Avenida Del Mar and El Camino Real, chanting “What do we want? Choice. When do we want it? Always;” “You say no choice, we say pro-choice;” and “this is what democracy looks like.”

Following the Supreme Court’s 5-4 decision this past week, Cromie said they couldn’t “just stand back and let the government dictate what I’m supposed to do with my body and what so many other people with uteruses do with their bodies” and decided to organize the protest.

Cromie and many of the protesters on Tuesday said the ruling took the United States back 49 years ago, to pre-Roe v. Wade.

“People with uteruses, we matter,” Cromie said. “We can’t just let these men who don’t have uteruses dictate laws for people who do. We’re going back in time … we went through this what, 50, 60 years ago. It’s just amazing to me that we have to do this all over again.”

Since 1973, Roe v. Wade prevented states from regulating abortions during the first trimester. It allowed for states to enact regulations that are “reasonably related to maternal health” and prohibited abortions entirely once a fetus “reaches the point of ‘viability.’”

On Friday, June 24, the U.S. Supreme Court overturned Roe in a 5-4 decision, stating that “the U.S. Constitution makes no reference to abortion, and no such right is implicitly protected by any constitutional provision” including the 14th Amendment.

San Clemente Pro Choice, the group that organized Tuesday’s protest, had also gathered in front of Historic City Hall on May 14, after Justice Samuel Alito’s opinion on Dobbs v. Jackson Women’s Health, the decision which overturned Roe, was leaked to Politico.

San Clemente Mayor Pro Tem Chris Duncan joined the protest stating that it was a “great expression of First Amendment rights, expressing their disappointment in a Supreme Court decision that takes away a fundamental right for women to decide the health care choices for their body.”

When another demonstrator asked Duncan how men feel about the Supreme Court ruling, he said he’s as disappointed as all of the women.

“I stand right here with them,” Duncan said. “The California Assembly passed a bill to have a constitutional amendment to solidify abortion or reproductive health rights and contraceptive rights that’s going to go to the voters. I think that’s a great decision.”

He added that he’s proud of the high school students for organizing the protest and expressing their First Amendment rights, as well as the people of all ages who “stand out here in solidarity to express that we will not tolerate the Supreme Court taking away rights.”

“What I would like to see though is this energy here turned into political action,” continued Duncan, who’s currently running for the 74th State Assembly District seat. “Protests are great but what we really need is to get people out, getting voters engaged to help elect people like me who are going to stand up for women’s rights and reproductive freedom.”

Tuesday’s protest was met with opposition from one counter-protester, a man, who demonstrated across the street using his own PA system to shout back at the pro choice group.

Donna Vidrine, a prospective candidate for the San Clemente City Council, said she was thrilled that San Clemente youth organized the event and are engaging politically.

“I’m here to support the youth who organized this rally for women’s rights for reproductive rights in San Clemente,” Vidrine said.

Vidrine said the path to recovering the right to an abortion is going to take consistency, staying organized, and holding elected officials accountable.

With California’s Legislature looking to add a state constitutional amendment protecting the right to an abortion, Vidrine said she hopes that it will encourage lawmakers in other states to do the same.

“For me,” Vidrine said, “to have the Supreme Court decision on a Friday and then two days later to have a significant number of states ban abortions like that, that’s just political, and it’s not taking the rights back to the state, it’s limiting women’s reproductive rights.”

Pastor Juli Patten of Christ Lutheran Church in San Clemente said she was protesting because abortion is “a fundamental right, it’s health care, it’s not about abortion, it’s about women’s health care and women’s rights.”

She said she hopes that the protests send a message to lawmakers that “they can’t make laws that govern people’s bodies. We are in America, we are not in a dictatorship, they cannot make choices unilaterally for a whole population, trans people, women, it’s just awful.”

“I think it sends a message that it’s not OK,” Patten said. “That what the Supreme Court did wasn’t OK. That it doesn’t reflect the opinion of our nation. We need the Supreme Court to be more fair and equal, which it’s not right now.”

“Christ Lutheran supports LGBTQIA+, we’re inclusive to all homeless, (unhoused), that’s who we are,” Patten said.

“I think there’s going to be a lot of death and a lot of disruption and a lot of problems, and I think that other states which allow abortion are going to do all they can to help people get what they need and not be bound by this,” Patten continued.

Patten is a mother of five children and has had an abortion.

“That didn’t stop me from having children but it was at a time when I couldn’t afford to support a child,” Patten said. “I think that it should always be a woman’s choice.”

Not all of the protesters morally believed in abortion. Toni Smith said that it personally went against her religion but she still believed in an individual’s right to make that choice. She hoped that the protest would help people realize that there are a lot more pro-choice people in Orange County than one might think.

“Especially when you see all the young people involved, I’m 63-years-old, so we grew up with the assumption that we would have a choice,” Smith said. “For that to be taken away, no one ever, ever would have thought that we would see this day.”