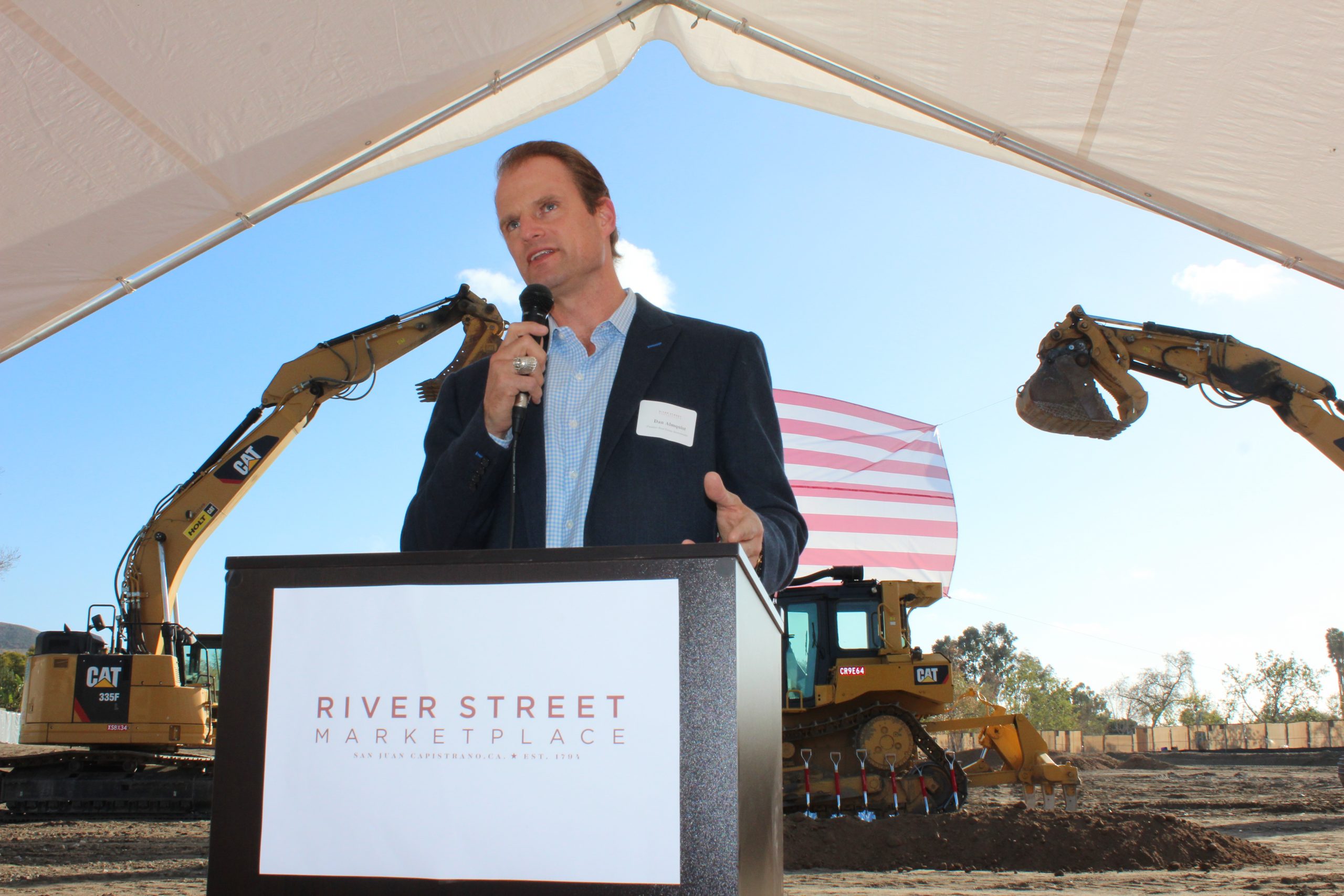 An agrarian-themed and pedestrian-oriented commercial village known as River Street Marketplace is coming in the near future to the Los Rios Historic District—an eventual arrival heralded by project developer Dan Almquist.

Almquist held a ceremony at the project site to usher in and celebrate the new area on Wednesday, Feb. 16, that was attended by his business partners, city officials, and local residents. Along with restaurant and retail space, River Street Marketplace will also have green space and walkways for pedestrian use.

The project is next to ZOOMARS at River Street Ranch, a petting zoo that Almquist also owns.

“There’s so much emotion and so many different feelings with standing here and seeing this project start after six years,” Almquist said. “It was April of 2015 that we went under contract with the Itos to purchase this piece of property.”

River Street Marketplace is currently under construction and mostly a dirt site for now. The project is expected to finish in spring 2023. The center can become a spot where people get together, Almquist said.

“San Juan (Capistrano) is such a special place, and it has been a long time—and, at times, a bit of a hard process,” Almquist said. “San Juan, I’m so grateful that we call it our home. This project, in a small way, became something that unified us.”

The groundbreaking ceremony featured a ceremonial blessing and remarks from representatives of the local Native American community, including by longtime Los Rios Street resident Stephen Rios. Rios said Almquist approached his family at the onset of the project to talk about plans for the center, and eventually reached out to residents in the neighborhood.

“Not everybody was on board with the project, needless to say, but what we learned quickly from Dan is that he had a plan that was well thought-out, that he was sincere about his presentation,” Rios said. “He was sensitive to our concerns. He was willing to back off if it was necessary to do that, but we kept going forward and the meetings just grew and expanded—and we learned to believe that Dan had a vision that would help develop this neighborhood.”

Rios said he and other Los Rios Historic District residents would learn to adjust to and accommodate expected impacts from River Street Marketplace.

Jerry Nieblas, another Los Rios resident with deep ties to the area, said the region’s ancestors would approve of the project because of the “honorable person” Almquist is.

Mayor Derek Reeve said he is excited about the direction the community is going in, and River Street Marketplace is an important investment for the area. Having local Native Americans at the ceremony was meaningful, he said.

“This land isn’t your typical location in the city. This means a lot to a lot of people,” Reeve said. “The political process might have been a little feisty at times, but that’s because of this particular piece of land that we’re sitting on.”

River Street Marketplace won’t just be another new development but rather somewhere residents can gather at, Reeve said.

In addition to River Street Marketplace and ZOOMARS, Almquist also owns Capistrano Plaza—which houses the restaurants Ramen Shack and Hennessey’s Tavern—and is putting together another project that could build new housing and retail space on Forster Street, as well as a new performing arts center to replace the existing Camino Real Playhouse.