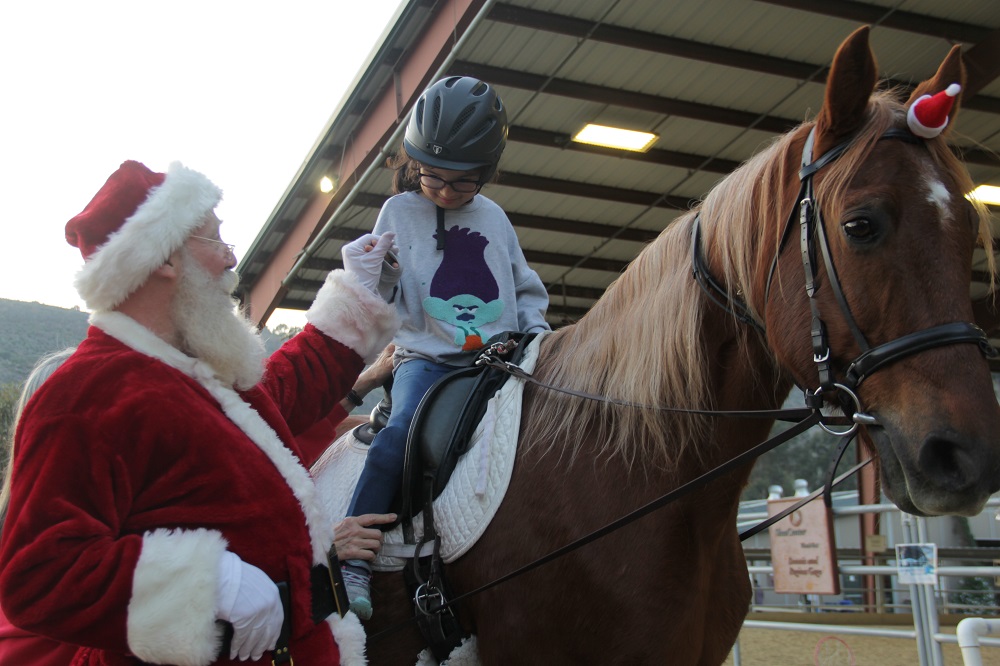 When Alyna Tapia was diagnosed with cerebral palsy at 9 months old, her mother, Adriana Tapia, didn’t know what to do or how exactly to move forward.

Tapia, a 36-year-old Lake Forest resident, began taking Alyna to physical and occupational therapy for treatment. But when Alyna was about 2 years old, her therapists advised Tapia to look into hippotherapy at the J.F. Shea Riding Center.

With hippotherapy, disabled individuals ride horses with the help of physical therapists in order to strengthen their muscles and improve mobility and balance. The movement of the horse helps to engage the person’s “sensory, neuromotor and cognitive systems to achieve functional outcomes,” according to the American Hippotherapy Association.

Over the past 40 years that Shea has offered hippotherapy and therapeutic riding, it has become a model for similar equine programs throughout the world. Additionally, Shea, which turned 40 this year, also offers other rehabilitative programs such as physical, occupational and speech therapy.

At the time Alyna first started coming to Shea, she had trouble holding her head up and couldn’t walk, Tapia recalled. But in the six years since Alyna, now 8, began hippotherapy, her mother has seen a significant improvement with her daughter’s physical capabilities.

“We didn’t know what to do. We were kind of like lost before we got here,” Tapia said.

“When we came here, we saw the dramatic change,” she said. “It gave us hope, it gave us happiness, (and) it gave her freedom.”

Within about three months of riding at Shea, Alyna began to improve, Tapia said. And now, Alyna can hold up her head and is able to walk short distances with the assistance of a walker.

For Alyna and many of the clients with physical and cognitive disabilities who receive treatment at the Shea Center, it’s all about making progress.

As part of Shea’s Rider Recognition Week, center staff on Tuesday, Dec. 11, presented Alyna and her fellow riders with awards, highlighting their individual improvements made over the course of the latest session. After receiving their awards, the children and their families got to meet with Santa for photos.

During the award ceremony, Janelle Robinson, Shea’s director of therapeutic programs and Alyna’s trainer, said Alyna’s biggest areas of progress this past session were in her walking and mobility as well as being able to follow instructions and build a dialogue.

The children get really excited when they receive the awards because it gives them a sense of accomplishment, said Eileen Caldwell, Editor & Community Relations for Shea.

Besides being able to progress physically, Alyna’s hippotherapy treatment has helped her to relax whenever she’s feeling anxious.

“Alyna, sometimes she gets really frustrated because she can’t communicate because she’s non-verbal,” Tapia said. “But with the horse, when she’s riding, she’s calm, she feels safe.”

Tapia added that seeing Alyna riding and progressing at Shea has made her happy as well.

“It makes me feel better all around. You see your daughter happy, and it’s like ‘oh, my God, this is wonderful,’ ” she said. “And, of course, the environment – the environment of Shea just provides a lot of support, a lot of happiness.”