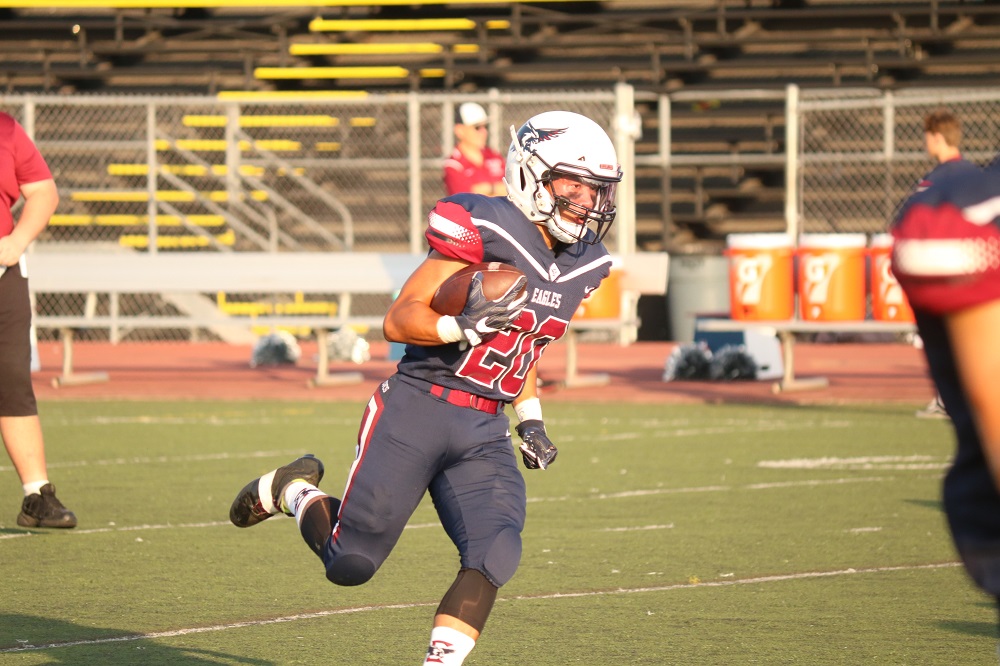 CVC has won seven games for the first time since 2014, and with a 2-0 Academy League record and its final two opponents posting a combined 7-7 record, the Eagles could be in line for their first league title since 2010 when they were playing eight-man football in the Express League.

CVC has been dominant in its wins, as well.

The Eagles scored 41 points or more in five of their six wins – CVC was also awarded a forfeit victory by Ribet Academy last week due to roster size and injury concerns. CVC has also posted two shutouts.

So what’s the biggest difference between last year and now?

Offensively, the Eagles developed a two-headed rushing attack with seniors Jack Roberts and Seth Yu. Yu is the leading rusher with 667 yards on 61 carries with 15 touchdowns, and Roberts has run for 543 yards on 65 carries with seven touchdowns. Yu has quintupled his production from 2017.

Roberts is a two-way player and the leader of the CVC defense. The emergence of Yu has allowed Roberts to be at prime condition on both sides of the ball. Roberts overwhelmingly leads the team in tackles with 63 and solo tackles with 49. Yu has also contributed on defense with 27 tackles and two interceptions.

CVC also hasn’t skipped a beat at quarterback. The Eagles started the season with their projected starter sidelined, but junior Tyler Henry has stepped up and delivered. Henry is completing over 56 percent of his passes for 853 yards and 11 touchdowns with only four interceptions.

Henry’s favorite target is another player that has developed soundly in junior Simeon Marton. Marton has more than doubled his production already with 32 receptions for 546 yards and six touchdowns. Marton helped jump start the CVC season with an overtime-winning touchdown in the season opener.

JSerra worked its way into the national rankings this week. The Lions (6-1, 1-1) entered at No. 24 in the latest USA Today Super 25 rankings. JSerra was bolstered by a strong performance at No. 2 St. John Bosco two weeks ago and a big win over Servite, 49-6, on Oct. 5. The Lions host Orange Lutheran for Homecoming on Friday, Oct. 12 in a likely battle for the third and final guaranteed Trinity League playoff spot.

San Juan Hills dominated Aliso Niguel last week, 38-0, for their third shutout win of the season in the probable Sea View League title game. If the Stallions (5-3, 2-0) can win at Dana Hills and at Laguna Hills as expected following this week’s bye, San Juan Hills would capture its second league title in school history and first since 2013.

Saddleback Valley Christian will look to ride the momentum of back-to-back road wins, including their league opener against Webb, after a bye week. The Warriors (2-5, 1-0) host California Military Institute in a nonleague game on Friday, Oct. 12 at Laguna Hills High School.