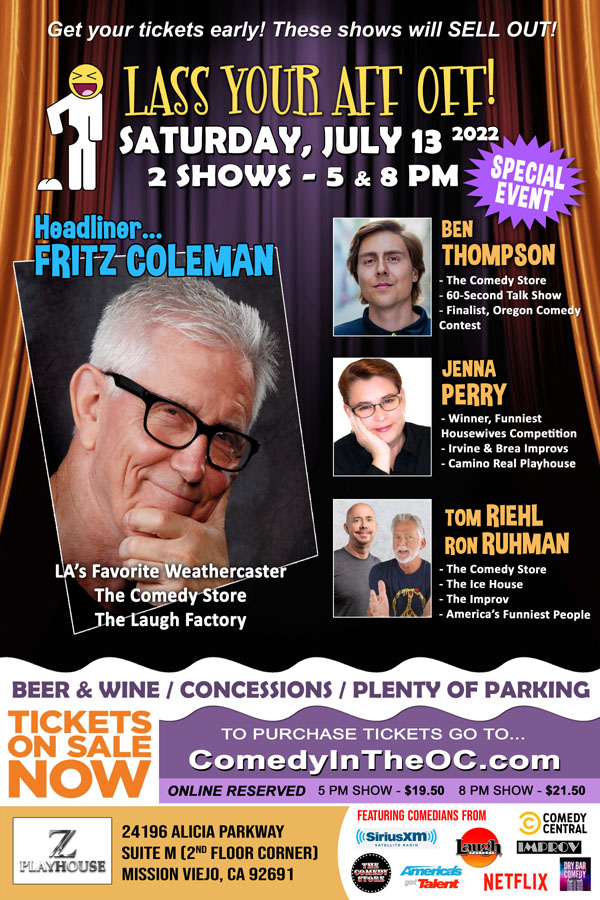 On Saturday July 9th, 2022, Lass Your Aff Off! will be back at the Z Playhouse with an incredible lineup of comedians that we can’t wait for you to see. We can start the description of the evening with one word; FRITZ! Yes, Fritz Coleman, the man who brought you the weather and laughter on KNBC for more than 35 years is bringing his unique comedy style to Mission Viejo on Saturday July 9th, 2022 and you need to be there! If not for the laughter; for the weather report!

Fritz grew up in Radnor, Pennsylvania, and attended Salem University in West Virginia and Temple University in Philadelphia where he studied radio, television, and film. He worked as a comedian and disc jockey for several years and as a radio personality at WBEN and later WKBW in Buffalo, New York. He left Buffalo for Los Angeles in 1980 to work as a stand-up comic. In 1982 he began work as weekend weatherman at KNBC and became the weekday weatherman in 1984.

Fritz has written and performed two one-man theater acts, titled The Reception and It’s Me! Dad! He received the 2004 EMA Community Service Award for his involvement with KNBC’s 4 Our Planet, a children’s program. He appeared in a supporting role in one of Raymond Burr’s last Perry Mason television films, The Case of the Telltale Talk Show Host, in 1993 and through all of that, he never stopped performing Stand-Up comedy including yearly appearances at the Camino Real Playhouse!

Having Fritz at the “Z” is very exciting, but there’s more! We also have the very funny Ben Thompson. Ben has performed at historic stand-up venues like The World-Famous Comedy Store, Ice House Comedy Club, and his Aunt’s Birthday Party— where he is a regular. Outside of California, Ben has performed all over, including Washington, Arizona, New York, England, and Portland — where was a finalist in the 2019 Oregon Comedy Contest.

Rounding out the evening of laughter is Jenna Perry. Jenna was the 2019 winner of the Funniest Housewives Competition. She has had the privilege of performing at the Brea Improv, the Irvine Improv, the Camino Real Playhouse and many other venues around Orange County. Her unique and hilarious perspective on everyday life keeps audiences laughing.

The evening will be hosted by veteran comedians Tom Riehl and Ron Ruhman. In addition to their many performance credentials including The Comedy Store, The Ice house, The Laugh Factory, and multiple Improvs, they also produce premier comedy events throughout southern California.