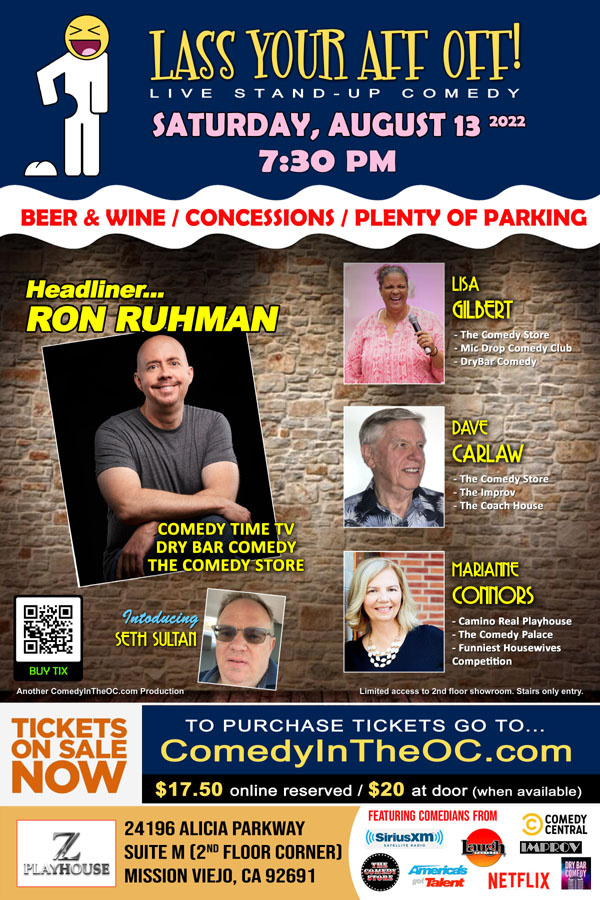 How do you follow the explosion of Lass Your Aff Off! comedy that occurred at Z Playhouse in Mission Viejo in July?  You light another fuse and wait for a funny night of exciting entertainment to begin!

On Saturday August 13th, the Z Playhouse welcomes the very funny Ron Ruhman, and you’re not going to want to miss the fun.

Ron has been called a “High Energy Seinfeld”.  He brings a very energetic style to the stage as he shares his interesting slant on day-to-day life in an act that is clean, smart, and very entertaining.

Joining Ron on Saturday August 13th is the very funny Lisa Gilbert!  Lisa started her stand-up comedy career in her hometown of San Diego, CA. Marrying late in life and being a mother of 9-year-old triplets makes her both inspirational and an instant crowd favorite with her clean comedy style and family-friendly jokes. She has opened for internationally known comic Michael Jr., performed for the American Troops, and just filmed a Dry Bar Comedy Special. Lisa travels nationally speaking for churches and corporate events.

Also gracing our Lass Your Aff Off! stage in August will be our longtime friend, OC’s own Dave Carlaw! Dave is a bona fide, Medicare eligible, senior citizen who loves the sound of laughter, especially when it’s in response to his unique take on “life after 70” in the United States. All age groups relate to his engaging style as he takes audiences through such topics as sex, marriage, medical care and crime in the streets. Dave’s comedy is based on real life experiences including work, relationships and aging.
Dave performs at comedy clubs, fundraisers and corporate events and is in constant demand to host and perform at private events.

Our big show on August 13th will be hosted by the very talented Marianne Connors.  While relatively “new” to the world of stand-up, Marianne’s clean and honest look at everyday life makes her a must see at comedy clubs and events. As a retired school teacher, her quick sense of humor kept her alive and sane for the many years she “performed” in front of a classroom filled with unruly students. Now doing comedy full time, Marianne talks about a wide range of topics audiences of all ages can relate to. Also appearing will be Seth Sultan, bringing his keen observations and absurdities that will all deal with on a daily basis.

Get your tickets early as this show will fill up quickly and get ready to Lass Your Aff Off!!