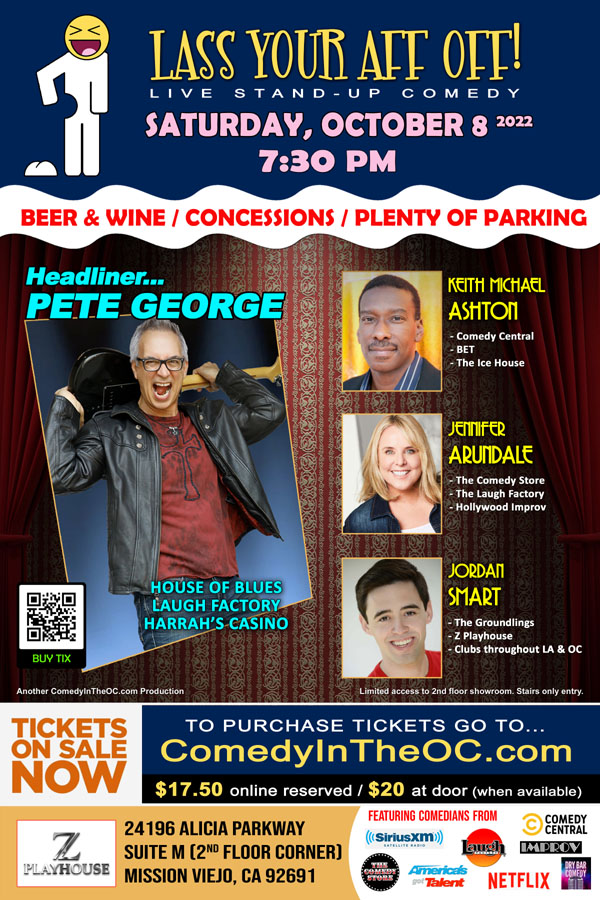 Summer might be coming to an end, but comedy at the Z Playhouse won’t be stopping anytime soon! Join us on October 8th as we welcome some of our old-time friends to the Z Playhouse.

Headlining our October 8th show comedy rocker Pete George. By 1985 Pete had already established himself as one of Cleveland’s top lead guitarists, when he was called up to join the original alternative rock group, “Separate Checks”. Releasing two original songs and a music video during the height of the MTV era, the band used its fame to start the petition drive that succeeded in bringing the Rock ‘n’ Roll Hall of Fame and Museum to Cleveland.

Around the same time, Pete’s quick wit and onstage banter, prompted for calls for him to try his hand at stand-up comedy. In all three of his first comedy competitions, Pete’s unique combination of musicianship and humor won him the top spot over the more experienced comedians.

By the 1990’s, Pete’s love of entertaining led to an acting career where he honed his skills performing in theater and numerous TV commercials. Pete booked his first film, The Shawshank Redemption, where he worked alongside Hollywood heavyweights, Morgan Freeman and Tim Robbins. Pete then went on the road fulltime where his original, unique style of stand-up & comedy music earned a large following of fans from across the country. Pete eventually moved to Los Angeles in 2000.

We are also excited to welcome Keith Michael Ashton to The Z!  This will be Keith’s first appearance at The Z and we can’t wait to hear what he’s been up to.  Keith performs regularly at Los Angeles clubs such as the Improv and Ice House and has made television appearances on shows on CBS, BET, and Comedy Central.

Our show will also feature the very funny Jennifer Arundale. Jennifer performs regularly at The Irvine Improv, The Comedy Store, The Rec Room, Flappers and a variety of Country Clubs and Resorts.  Jennifer was a finalist in the Funniest Housewives competition and a semifinalist in the Jeanne Robertson Humor Contest.

Our show will be hosted by Jordan Smart. While relatively new to the world of stand-up, Jordan’s extensive improv background with The Groundlings coupled with his high energy and likable personality makes him a natural to step in and host this comedy extravaganza!

We look forward to seeing you on Saturday, October 8th at the Z Playhouse in Mission Viejo as we keep the comedy train rolling full steam ahead!