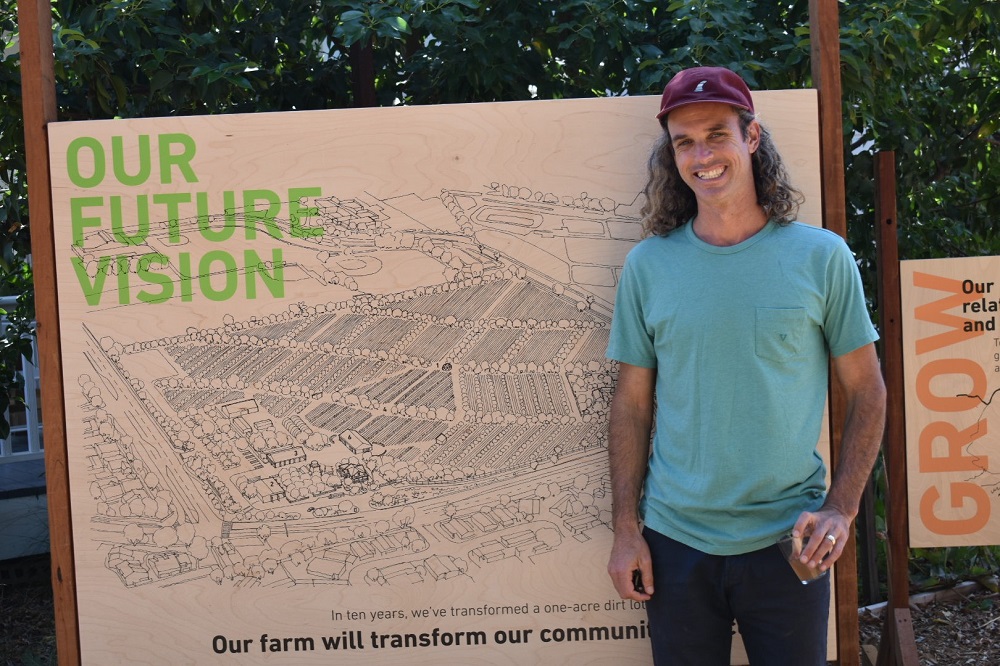 It’s hard not to notice Evan Marks’ joy as he discusses how The Ecology Center in San Juan Capistrano got its start.

“When I came and started this project, it was an empty house and a dirt lot,” Marks said. “So together, with the support of the community, we started this thriving one-acre ecosystem and what it endeavors to do is teach us to be human in a healthy way.”

That empty house is the historic Joel Congdon House, and the dirt lot is the property around it. The Ecology Center, a nonprofit, has transformed both the home and the lot into a place for field trips and educational classes.

It’s where people learn about growing their own food, making their own goods and appreciating nature. Flowers, fruits, vegetables are everywhere.

Now Marks, executive director for the nonprofit, is on the next leg of his transformational journey: taking a nearly 28-acre plot of land right next door and turning it into a place that continues The Ecology’s Center’s commitment to local farming and sustainable living. He wants to create what he calls a “Transformative Community Farm.”

“We want people – everyone in San Juan – to think of this is as their farm,” Marks said. “They get to walk through our front door and engage in the farm in some meaningful way and so together we build a culture that gives more than it takes.”

According to a city staff report, the rising cost of water made it difficult for South Coast Farms to maintain the viability of the business in recent years and led to a roughly $300,000 negative balance in the farm’s water account.

Under the agreement, The Ecology Center will pay the city $25,000 to operate the site and an additional $8,000 toward the water debt each year, for a total payment of $99,000 within three fiscal years.

The cost of operating the site will increase to $35,000 and the payment for the water debt would increase to $10,000 in subsequent years.

Marks and the owner of South Coast Farms, George Kibby, had been in talks over the last year about how they might maintain the agricultural nature of the site, the staff report says.

During the Sept. 4 meeting where the council approved the agreement, dozens of people – many of them clad in green shirts with The Ecology Center logo – clapped and cheered.

Multiple public speakers said they saw the agreement as a way to preserve the farm, and in the process, a piece of San Juan Capistrano’s history.

Though the immediate goal was maintaining farming operations by bringing the farm site under the nonprofit’s umbrella, the long-term goal has been to bring Marks’ vision of a community farm to life.

What does that model look like? Well, for one thing, expect a wider variety of crops.

“We’re going to diversify and retool,” Marks said. “So it’s going to be a little bit more of a tree-based agriculture going back to the origin of the farm.”

Marks said the farm, when it was started in the 1800s, grew English walnuts. In later years, avocado and citrus trees were grown there. The farm later did away with the trees and replaced them with annual row crops.

Marks said the trees are good for a variety of reasons. For one thing, they use less water once they’ve become established. They can also function as a windbreak, which is good for preventing soil erosion.

He said he envisions rows of trees with fruits, flowers and vegetables planted in between them.

The diversification of crops is only one part of The Ecology Center’s greater vision for the Kinoshita Farm Site.

Marks said there would be a culinary institute where produce from the farm would be preserved and made into jams. There would also be a café, where chefs would cook up dishes made exclusively from ingredients grown on site.

“It’s a deeper, richer education so that we’re training up farmers, chefs and ultimately our community on healthy eating,” Marks said.

Marks said those buildings would be part of a larger “Maker Village,” where people could learn different skills such as ceramics, woodworking, textile art and baking.

He said he also plans to have “you pick” experiences on the farm, where people will be able to pick apples, peaches, figs and berries during the seasons when they’re ripe.

That’s a concept that South Coast Farms had already been employing, as it allowed visitors to pick their own strawberries year after year.

The center will also hold other seasonal events.

“Imagine if it was the fall, and people are going to Thanksgiving and Halloween, we might grow 40 different types of pumpkins and squash and turn it into a squash festival or have a pie competition,” Marks said. “We start to build the community around agriculture, just the way that it always was. We’re just trying to resurface some of these age-old ideas.”

The City Council approved the initiation of an amendment to the Kinoshita Farm Specific Plan during its meeting on Sept. 18.

Currently the Kinoshita Farm Specific Plan, which governs what can and cannot be put on the Kinoshita Farm Site, does not allow for certain structures, including retail, eating and drinking establishments, museums, educational uses, artist studios, nurseries, overnight use spaces and additional parking.

With the City Council’s approval, city staff will now be able to come up with an amendment that allows those kind of structures after receiving more detailed entitlement applications for the Ecology Center, according to a city staff report.

An environmental review would need to be completed by a third party as part of the process.

The amendment and matching entitlement packet from The Ecology Center would have to go through the Design Review Committee, Cultural Heritage Commission and Planning Commission.

In the interim, The Ecology Center is planning some different events, including a tree planting fundraiser in the winter and tours of the farm property on weekends.

People who have long been fans of the “you pick” strawberry experiences at South Coast Farms need not fret, according to Marks.

“This will be a big strawberry year for us as well,” he said.

The Ecology Center is located at 32701 Alipaz Street in San Juan Capistrano. For more information on their programs, visit https://www.theecologycenter.org/