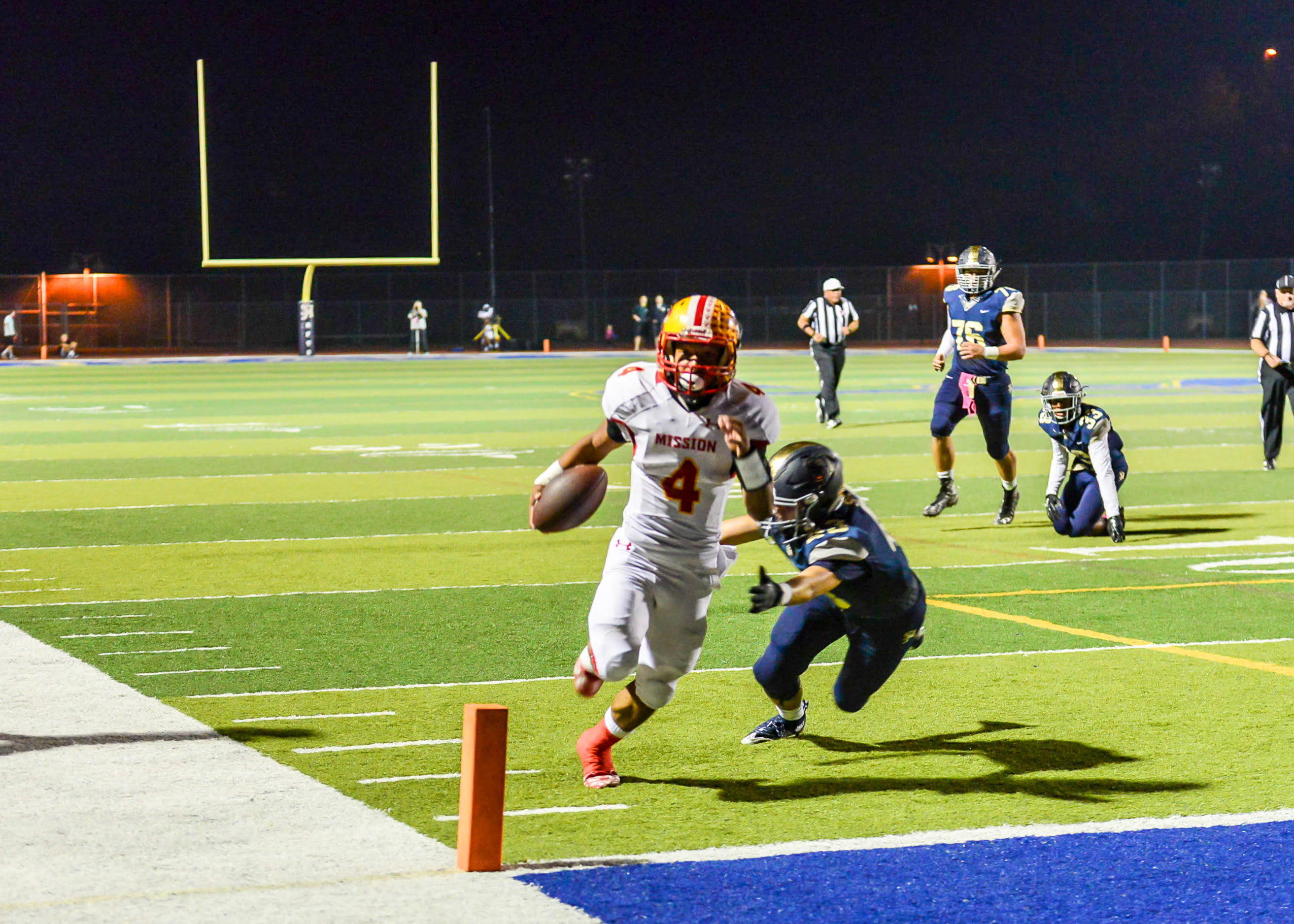 But by the end of the first half, there was no doubt that Mission Viejo’s streak would continue on.

Johnson shined in the opening half, completing 13 of 15 passes for 255 yards and two touchdowns. Seven of Johnson’s 13 first-half completions went for 25 yards or more and ignited the offense, which scored 34 unanswered points to open the game.

Johnson passed for 321 yards and completed 17 of 20 passes with an interception.

After Johnson hit Colin Schooler on a five-yard pass to extend a drive on fourth down deep in the Stallions (7-1, 1-1 league) territory, Miller scored the first of his three rushing touchdowns on a 28-yard burst to give the Diablos (9-0, 3-0) an early 7-0 lead.

A 45-yard pass play from Johnson to sophomore receiver Austin Osborne set up a Jacob Clark three-yard touchdown run, which made it 14-0, minutes later.

San Juan Hills had several drives stall throughout the first half, in part due to the speed of the Mission Viejo defense. The Diablos were able to pressure San Juan Hills senior quarterback Patrick O’Brien and excelled at tackling the Stallions playmakers in the open field.

Mission Viejo limited the potent San Juan Hills offense, which entered the game averaging just over 47 points per game, to just 157 yards of total offense in the first half.

The Diablos offense piled up 376 yards of offense in the first half alone.

Mission Viejo extended its lead in the second quarter on a highlight reel play at the seven-minute mark. On first and 10 from the Stallions’ 23-yard line, Johnson fired a ball to the back corner of the end zone and senior receiver Jason Lee made a twisting, leaping catch, got one foot in, and scored to make it 21-0.

Miller, who ran for 142 yards on 20 carries, scored just over a minute later and Johnson connected with Lee again on a 20-yard touchdown pass to take a 34-0 advantage into the break.

“We weren’t ready for the speed of the game, the physicality of it and I need to do a better job,” San Juan Hills head coach Aaron Flowers said. “Whenever you have results like this, you get humbled a little bit, you get embarrassed …Ultimately at some point (the loss) will be a good thing because you played a great team. We’ll get healthy and get back to work on Monday.”

San Juan Hills played even with the Diablos in the second half, but it was too little too late.