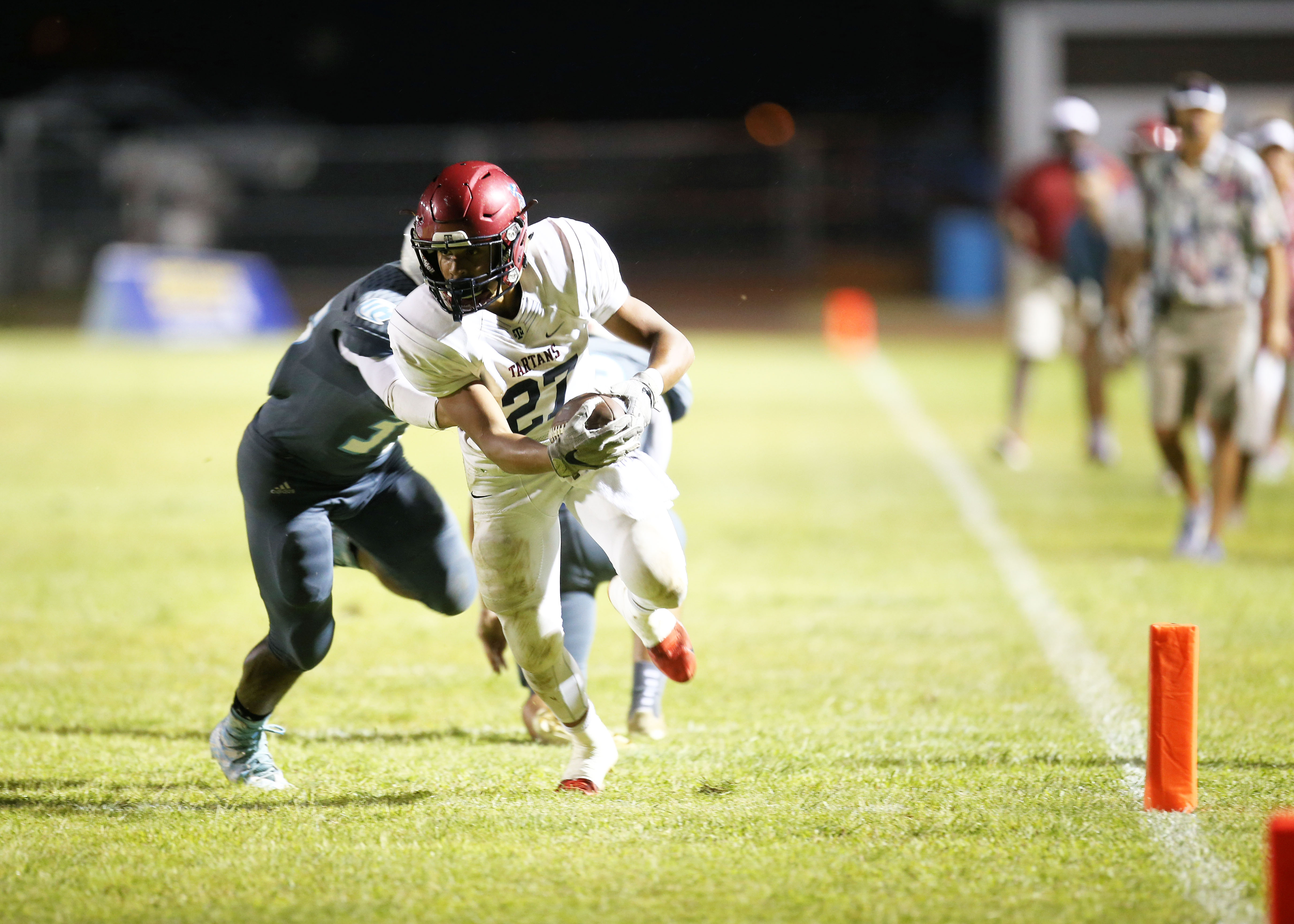 For the second season in a row, the St. Margaret’s football team traveled to Hawaii to play its season-opener. The Tartans performed well on the Big Island and beat Kealakehe 34-14 on Aug. 18, picking up the all-important first win of the season.

While it was a memorable and successful trip for many of the players, it came at a cost.

Several Tartans suffered multiple injuries during the game, the most significant being to returning junior running back Koa Todd, who hurt his knee and will be out for the remainder of the season.

Todd, who had a respectable sophomore campaign, was slated to be a key contributor at running back and linebacker this season. Returning junior receiver/linebacker Nick Falshaw broke his ankle during the game, and will be out for several weeks.

The Tartans will also head into the second week of the season without head coach Stephen Barbee, who is away from the team dealing with an undisclosed medical issue.

Every year a football team deals with injuries and issues, Healy acknowledged. This year the Tartans are having to deal with both right out of the gate.

“You can’t believe the team bond and togetherness that goes on here. It’s that bond that pulls us through challenging times and will with this adversity,” Healy said. “When you lose a couple players you look to the guys next to you and that’s what they’ve done. The team has rallied and performed well.”

While a few pieces are missing, the larger whole of the team is intact and it is filled with impact players that could carry St. Margaret’s to yet another playoff berth.

Healy hailed returning senior receiver and Penn commit Ryan Cragun as “one of the best players in the history of the school”. Cragun recorded over 1,000 yards receiving and 22 touchdowns as a junior. He is also one of the team’s lockdown cornerbacks.

The quarterback position has always been a prominent one at St. Margaret’s and this year James Mott will step into the role. Mott burst onto the scene last year when he started the final regular season game against Crean Lutheran, passing for three touchdowns and running for two more in a 49-7 win. Mott’s play powered the Tartans to a passing league win at the Battle of the Hills 7-on-7 event this offseason.

Senior running back and receiver Marcus Knight had a breakout game in Hawaii and rushed for three touchdowns.

Seniors Max Martinez and Ryan Gottlieb return to both the offensive and defensive lines. Senior Brandon Wu will bring experience at cornerback.

The Tartans will have two new linebackers in junior Jack Young and sophomore Caden Smith, who Healy says can be an impact player right away.

The Tartans spent 2016 as a freelance team, with no league affiliation. This year, the Academy League is back, and will feature the Tartans, Crean Lutheran, Orange Vista of Perris and St. Pius X-St. Matthias Academy of Downey.

Now that they have a league to play in, the Tartans do not have to worry about earning an at-large berth to get into the playoffs. If they finish top-2 in league, they will be in.

“We’re not subject to getting some unlucky situation now. We’re in control of our own playoff destiny,” Healy said. “But our goal is to win league. We’ve got some tough teams in it, and we’re excited about the Academy League being back again.”—SB