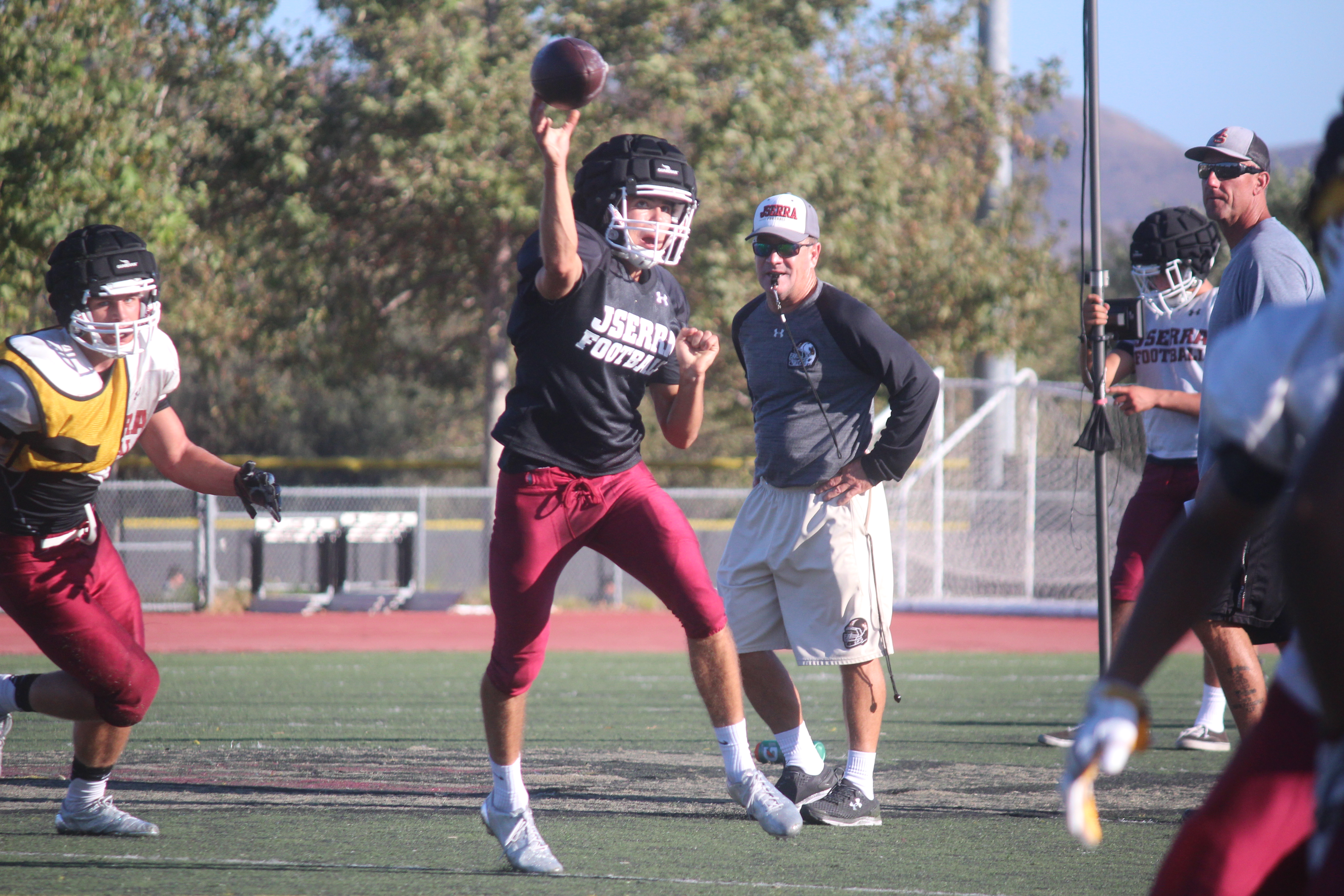 As part of our annual high school football season preview, we headed out to JSerra training camp

The JSerra football team did not linger on last year’s heartbreak very long. In fact, it was almost impossible for the team to feel the effects, considering 22 seniors graduated from last year’s group.

The Lions will field a young team in 2016, and many of the players were not around to witness the emotional rollercoaster that was the final two weeks of last season. With its back against the wall, JSerra surged late and won its final two games of 2015 against Trinity League rivals Mater Dei and Orange Lutheran, only to miss out on the playoffs because of a coin flip loss.

There are several returning players who played major roles on the late-charging JSerra team from last year, but many of the Lions are starting the season off with a clean slate.

The young team will be tested early.

Head coach Jim Hartigan said the schedule the Lions will play is the toughest he has ever coached, and will be the toughest schedule for a football team in school history. The Lions always play in the high-profile Trinity League, but their non-league schedule will feature three road games and two Thursday night games, meaning the Lions will be playing on short rest and limited preparation time. Eight of the 10 teams on the Lions’ schedule are members of the newly formed CIF-SS Division 1, the top postseason division in the section.

Last season, the Lions used a platoon system at quarterback, rotating Matt Robinson and Riley O’Brien under center depending on the game situation. This year, Hartigan and his staff handed the starting job to Robinson, a rising junior. O’Brien, a senior Penn commit and three-year starter, will still be called upon to run some wildcat offense, but his focus will be needed elsewhere on the field as a defensive back, receiver, running back and kick returner.

Robinson was instrumental in the Lions success last season, and Hartigan believes the quarterback has gotten better over the offseason. He showed the staff he was capable of taking over under center in an intense passing league schedule. Robinson has also improved his ability as a runner, and has flashed the ability to extend plays with his legs throughout summer practices.

“He’s really elusive. If he sees an opening and nothing is open, he’ll scoot out there,” Hartigan said. “His arm is also a lot stronger and he’s got good spin on it and has really good touch on the long ball.”

Robinson’s ability to scramble and make plays with his feet fits in with the Lions’ game plan of getting their speedy playmakers into space for big gains. Senior running back Nick Callan, junior Eli Jefferson and sophomore Thomas Huff all stand under 5-feet-9-inches tall, but possess breakaway speed, according to Hartigan.

Protecting Robinson on the offensive line will be junior Jake Parks and senior Zelan Tupuola, the only returning lineman with experience.

On defense, O’Brien will be a constant threat to quarterbacks as a defensive back. Sophomore Calvin Mouisset will lead a young linebacker unit.