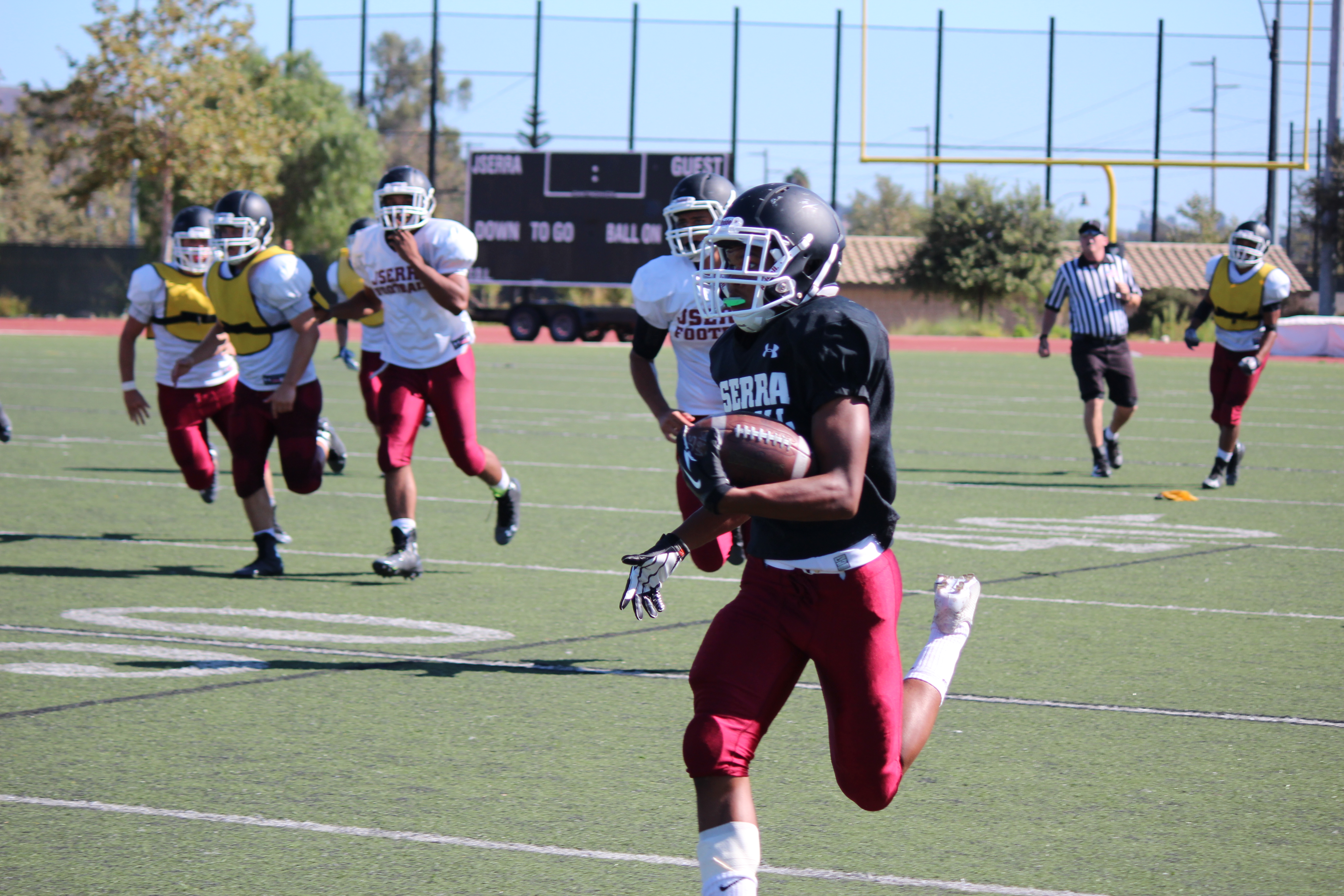 After a landmark season JSerra deals with injuries, prepares for daunting schedule

The injury bug has made its way into the JSerra Catholic High School football training camp.

Some of the injuries are more minor than others, but the biggest of them all came at the expense of returning senior middle linebacker David Eugenio. The Lions leading tackler in 2013 suffered a broken foot during the offseason, which will sideline him for 6-8 weeks, according to head coach Jim Hartigan.

Eugenio had a team-high 97 tackles last year and was named to the second team All-Trinity League. Hartigan expects Eugenio to be back in time for Trinity League play. Senior Aaron Mathews figures to be Eugenio’s replacement.

Eugenio wasn’t the only impact player from last year’s seven-win season to go down with an injury, as standout receiver Ethan Aguayo is nursing an injured hamstring. Hartigan said he does not anticipate Aguayo, who also plays cornerback, to be sidelined for long.

Their middle linebacker may be injured, but the Lions have a wealth of players returning on defense that could make an impact during their tough preseason schedule.

The defensive line will again be a strength for the Lions this season. Four players from last year’s line return, including D.J. Bailey, Brody Barrett and Joe Monroe. Bailey had a breakout junior season, racking up 52 tackles and a team-high seven sacks. The Lions strength and size at the line was a major factor all last season and Hartigan expects even bigger things out of the unit in 2014.

“The defensive line has gotten better. We’ve gotten stronger up front,” Hartigan said. “The inside guys, Barrett and Monroe, are both over 300 (pounds) so they’re good sized kids.”

The Lions lost standout playmaker Casey Eugenio to graduation, which makes finding his replacement a priority this offseason. Eugenio, the team’s former running back and punt/kick returner, was a huge threat to opposing defenses all season. Hartigan said they have not decided on who will be the Lions running back yet.

This season will mark the last go around for returning senior quarterback Nick Robinson. Robinson earned the starting job as a sophomore and has steadily progressed since. In his first year, Robinson threw five touchdowns and 11 interceptions. He drastically improved on that ratio last season, throwing for 2,140 yards, 22 touchdowns and six interceptions. Robinson’s ability to maintain possession of the ball on offense gave the Lions a puncher’s chance in the Trinity League last year, when they won two games.

Aguayo, when healthy, along with Diego-Williams and Sam Fillipi, will be the go-to receivers for the Lions.

Despite finishing with a 7-3 overall record and finishing in a three-way tie for third place in the Trinity League, the Lions were not awarded an at-large berth into the CIF-SS football playoffs, a process which heavily relies on strength of schedule. This year, the Lions will play arguably the toughest preseason schedule in school history and one of the most difficult schedules in the area. Games against Huntington Beach, the reigning CIF-SS Southwest Division champions, Chino Hills and St. Bonaventure highlight the preseason slate. After preseason, things only get tougher when the Lions enter the Trinity League.

“Our schedule has gotten tougher … You really have to do some special things to get to eight (wins) and, more importantly, you think how we are going to get into the playoffs,” Hartigan said. “We may get there with six wins, it all depends on what happens with the rest of the league. But league will be tough. We’ll hopefully get a wild card but there are no guarantees unless you’re top-3, which is what we’re shooting for.”