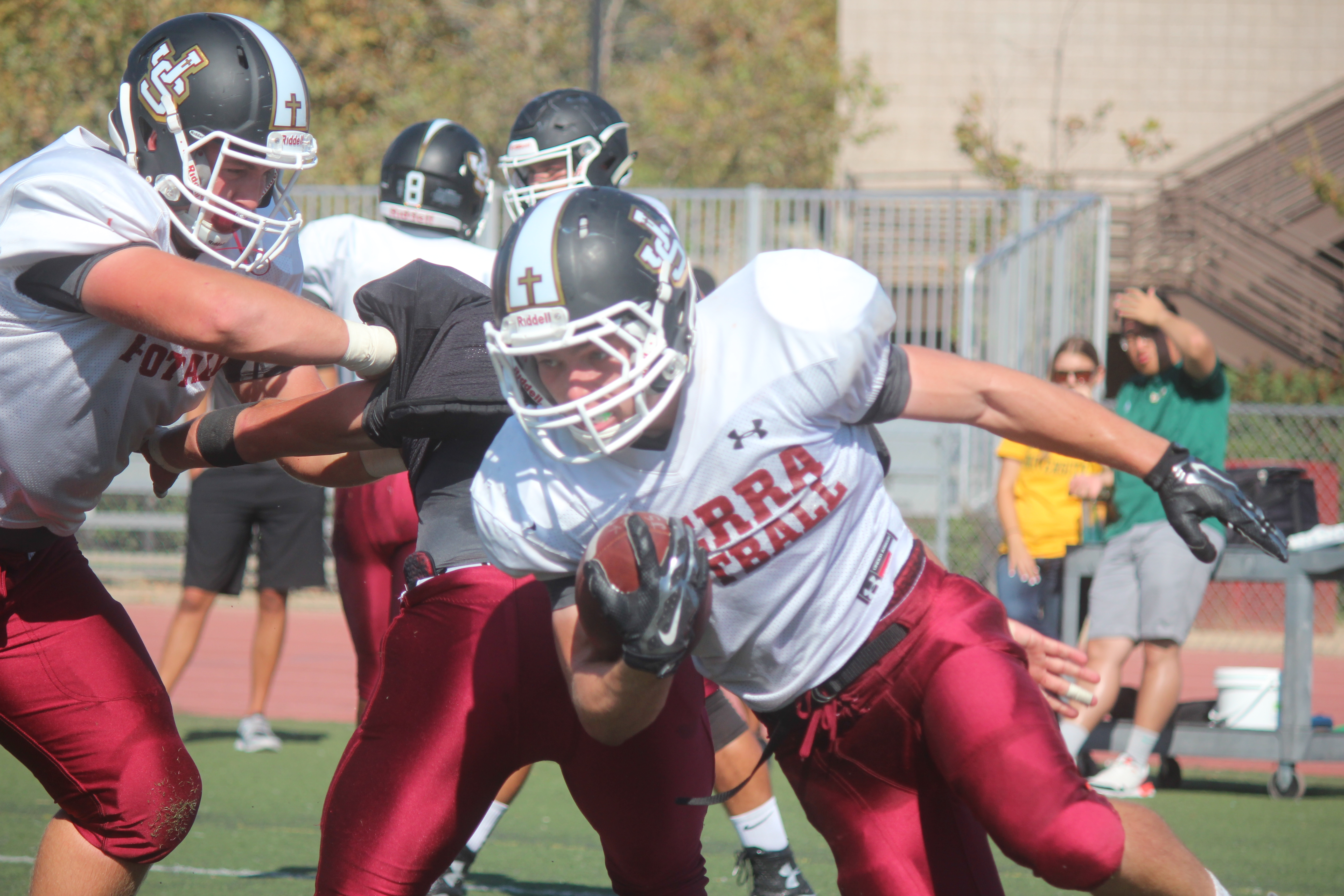 Following the program’s most successful season to-date, the JSerra football team is faced with the difficult task of reloading for another playoff run.

The Lions finally had the breakout season head coach Jim Hartigan envisioned when he stepped into the role back in 2007. Led by a balanced team filled with experienced seniors, the Lions defeated Santa Margarita, Mater Dei, Orange Lutheran and Servite en route to a 4-1 record and a second-place finish in the Trinity League, one of the toughest prep football leagues in the state. JSerra even won their first-ever playoff game.

There was a lot of offseason movement on the Lions’ roster, which included some high-profile transfers.

With all of the offseason movement, Hartigan and his team have adopted a “next man up” philosophy. The Lions, who still return several impact players, are meeting the challenge head on.

In order to gauge how tough mentally and physically his team would be this offseason, Hartigan and his staff took the players to boot camp—literally. The Lions participated in a Navy Seal training day that featured being in the water in the wee hours of the morning accompanied with grueling physical exercise.

“Since we were so inexperienced, I really haven’t seen guys perform under a tremendous amount of pressure in a game-type situation. I thought we might be able to see some guys perform (at Seal training) and we did,” Hartigan said. “We saw some guys step up.”

The experience was not lost on the players, who rallied around each other to get through what some described as their hardest workout day ever.

“That was one of the hardest things of my life. It made us count on one another and push each other through hardships and made us strive to finish,” senior safety Conor O’Brien said.

The Lions’ offense will rally around their big and talented offensive line, which returns Luke Wattenberg and Nick Harris, who are both University of Washington commits. Wattenberg, a 6-foot-5-inch 275-pound right tackle, is regarded as one of the top lineman in the county. Harris played right tackle last season as a junior but has transitioned to center.

The reason behind Harris’ move to center is the Lions’ quarterback scenario. Junior Riley O’Brien, younger brother of Conor, and sophomore Matthew Robinson are currently vying for the starting quarterback job. The two have yet to start a varsity game and Hartigan moved Harris to center in order to provide the offense with leadership and stability up front.

Hartigan said both Riley O’Brien and Robinson will get playing time in the season opener against Cabrillo on Aug. 28.

Rounding out the rest of the Lions’ offensive line will be senior Shane Avera, junior Zelan Tupuola and rising sophomore Jake Parks.

Two transfers into the program should provide immediate results.

Junior Avery Williams transferred in from St. Francis of La Canada and will be the team’s starting running back. Hartigan said Williams has the ability to put up numbers comparable to Vander’s last year.

On defense, Dana Hills transfer Corey Selenski will join a linebacker unit led by returning senior Kyle Adams, who recorded 64 tackles last season. Selenski, who had 100 tackles as a junior at Dana Hills, and Adams are both hard-hitting linebackers who have the ability to play tight end on offense.

Leading the secondary will be safety Conor O’Brien, who had a breakout junior season that featured 77 tackles and a team-high four interceptions.

The Lions’ nonleague schedule remains similar to last season, with the exception of dropping St. Bonaventure for Hamilton in week four. The Lions’ nonleague slate is highlighted by a road game against Chino Hills on Sept. 4, which should serve as a litmus test for the Lions to see where they stack up against tough competition.