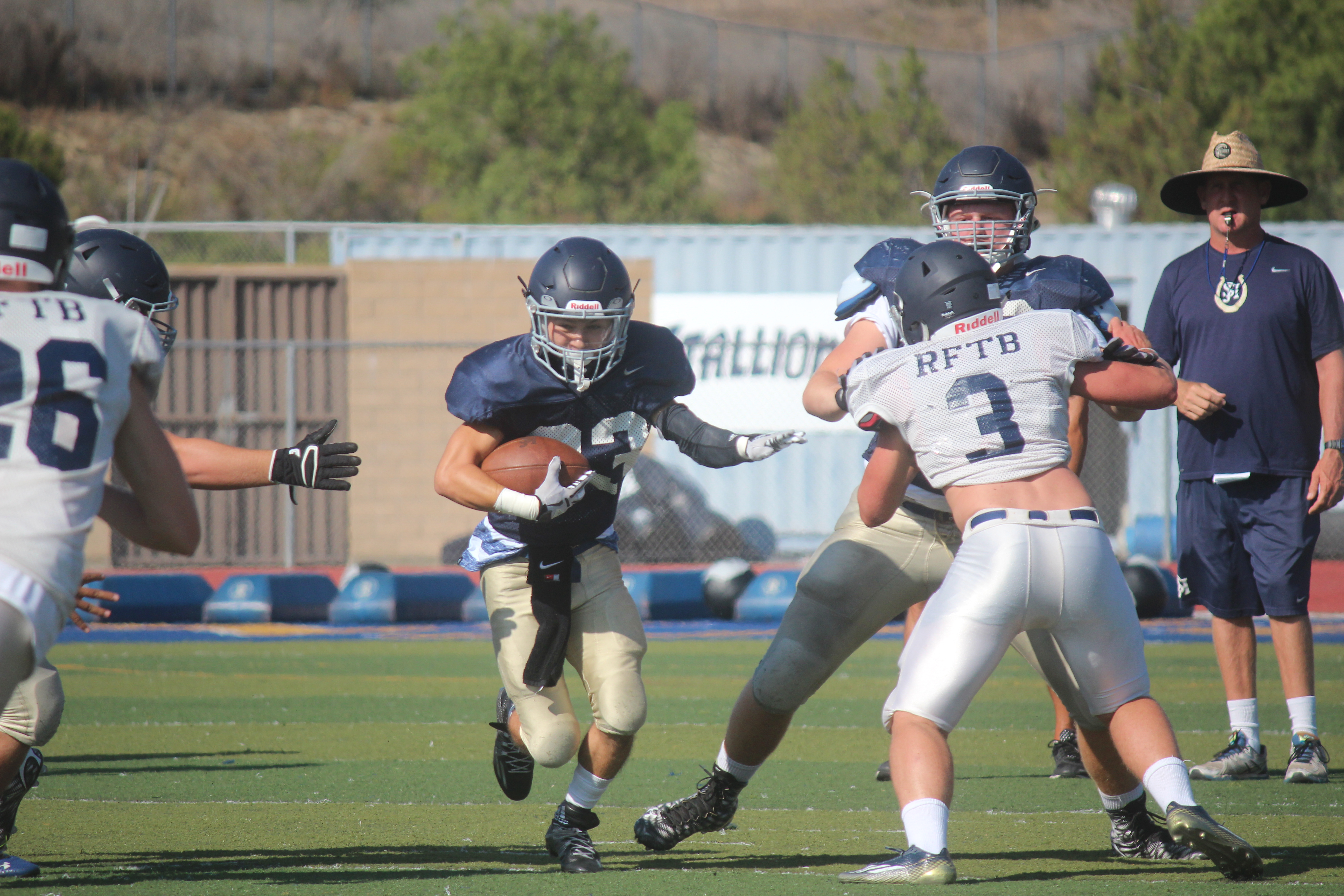 Patrick O’Brien still wears the same wristband he wore at the tail end of last season. Even as the training camp practices wind down and the season opener creeps into his view, the band remains a constant fixture on the wrist of the San Juan Hills football team’s senior quarterback.

O’Brien said the team still wears the bands, not wanting to forget the experience they all earned after their first year in the South Coast League and an appearance in the CIF-SS West Valley Division playoffs.

The program’s “Ride for the Brand” motto is on one side of the wristband and on the other, in all caps, reads the word “FINISH”.

The Stallions placed fourth in the competitive South Coast League last season and, despite their 4-6 regular season record, put together a strong enough strength of schedule resume to punch their ticket to the playoffs.

The team was competitive throughout the year, but saw a slight dip in their intensity at the end of South Coast League games. San Juan Hills watched as El Toro, Mission Viejo and Tesoro pulled away in the second half and held on for victories. The wristbands the Stallions’ players wear remind them of what it will take to stay in the playoff hunt.

“It’s more than just 24 minutes, it’s 48 (minutes),” O’Brien said. “We have a lot more guys that know how to play a full 48 minutes now and I feel like it’s going to be a different story this year.”

San Juan Hills will return 11 players who now know what it takes to succeed in one of the top public school leagues in the county.

O’Brien, a Nebraska commit, will lead an offense that lost its starting running back to graduation but returns top receiver, Jacob Huff. O’Brien and Huff, a junior, connected for 64 receptions, 746 yards and six touchdowns in 2014. The Stallions running back has yet to emerge, but head coach Aaron Flowers said a committee of Devin Wegis, Brock Cazel, Cole Suscheck and Anthony Aguayo are all in the mix to get touches. Wegis has the most experience of the group, having played in five games last season.

Flowers said the team’s offensive line, which includes seniors Nathan Carlson, Tommy Gaisford, Jared Aviles and Zac Oblea will have to play well, especially against the talented defensive fronts they will face in league.

O’Brien spent the offseason honing his craft and blazing the recruiting trail. The senior quickly became one of the top rising quarterback prospects in the county after a standout 7-on-7 passing league season. O’Brien was also invited to compete in the prestigious Elite 11 quarterback passing competition, where he advanced to the penultimate stage of 18 players.

O’Brien now has a year of starting varsity experience under his belt and spent the summer competing against the nation’s best prep prospects. Flowers, a former standout signal-caller himself, believes his quarterback has refined his skill set enough to have another successful season.

“With all of the exposure (O’Brien) has received, two different kinds of coaching, he’s really just come to understand the offensive and defensive side of what everyone is trying to do,” Flowers said. “You definitely feel more comfortable with him when you call a play that it’s going to get executed.”

On defense the Stallions will be anchored by senior linebacker Tim Newman and junior defensive lineman JJ Glass, two playmakers who had big 2014 seasons.

Newman was the team’s leading tackler last year, racking up 81 total tackles and eight sacks, at defensive end. The 6-foot-2-inch senior was moved off the line to take over at middle linebacker this year. Flowers plans on using Newman, who weighs 230 pounds, at defensive line at times and will deploy him on offense at tight end.

As a sophomore, Glass broke through for 50 tackles and two sacks. The junior will play nose guard this season and has been pegged by Flowers and his teammates as a player to watch.

Despite Glass’ presence on the line, the Stallions’ defensive front and defensive back depth charts are relatively inexperienced.

“Defensive line and at defensive back is where we need guys to step up. Guys who have maybe not played that much at the varsity level will need to step up and make plays for us,” Flowers said.

The Stallions’ schedule remains relatively intact, with the exception of adding 2014 CIF-SS Southwest Division runner-up San Clemente for the season opener on Aug. 28. Other top nonleague games to watch will be a rivalry match against the Sea View League’s Capistrano Valley on Sept. 11 and a home game against Los Alamitos on Sept. 25.