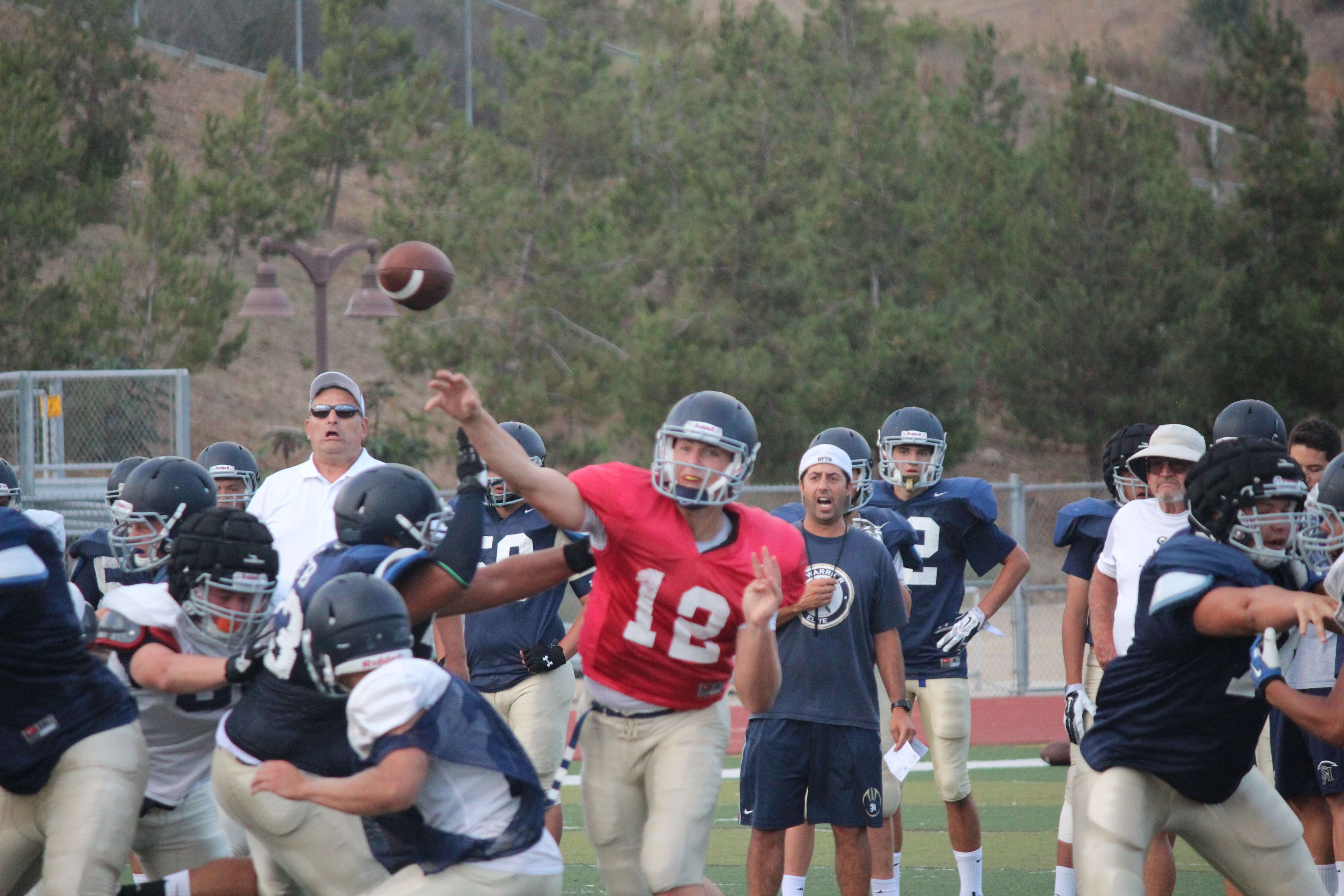 The Stallions were led by a strong group of seniors who played beside each other for four years, culminating in an impressive undefeated run through the Sea View League. The Stallions set a school record for most wins in a season (10), captured the first league title in school history and won a playoff game.

Because of their efforts, San Juan Hills was moved from the Sea View League to the South Coast League over the offseason. The new league features established football powerhouses, like Mission Viejo and Tesoro high schools, along with El Toro, which has always been a threat in the high school football scene. Dana Hills rounds out the league.

It is a league schedule the likes of which the Stallions have never seen. But that hasn’t stopped the team from building on their momentum from last year and preparing for the new challenge.

Head coach Aaron Flowers said that the Stallions are preparing the same way they always have, by taking things one step at a time.

The Stallions lost a large group of standout seniors last year and only return seven starters, which left multiple spots on the field open for competition. San Juan Hills has used the offseason to fill those spots and work on building new team chemistry, something the Stallions thrived on last year.

Heading into their fifth game of last year, a Sept. 27 tilt against Fullerton, the Stallions were winning games but did not have an identity, according to Flowers. The intensity in practice and preparation was not there. But following that week’s 28-21 loss, the team refocused and hit their stride. They began clamping down on defense and built their identity around that.

With so many new faces, the 2014 version of the Stallions still have a lot to figure out, according to Flowers. Luckily for them, it’s still very early.

“We don’t know our strengths yet. I think that’s kind of the interesting thing with this team. We feel like there are some things we can do but we don’t know. We’re going to find out with Thousand Oaks (on Aug. 29) about who we are,” Flowers said. “That’s why I’m excited and fascinated to see how this team is going to develop into their own identity because we had kids who graduated last year who played a ton as sophomores, juniors and seniors. So now it’s a new identity. To see that come together is pretty cool.”

Junior quarterback Patrick O’Brien will lead the Stallions offense in 2014. O’Brien has only played the position for the past two years but is under the watchful eye of Flowers, a former standout quarterback himself.

Senior running back Mike Miscione was among the team’s leading rushers last season, taking 134 carries for 833 yards and nine touchdowns as a junior. He also caught 32 passes and scored four touchdowns as a receiver. The versatile Miscione has developed into a team leader and echoed his coach’s views on the Stallions need to find an identity if they are to improve on last year’s efforts.

“Since we did lose a lot of guys last year we have a lot of new kids coming up. It’s great, I love the opportunity to play with new kids because we have the chance to build as a team,” Miscione said.

Paving the way for Miscione up front will be returning senior guard Jake Nelson, the lone returner on the Stallions offensive line.

Senior receiver Kolton McCluskey caught 30 receptions for 504 yards and two touchdowns in 2013 and will return to lead the receivers.

The Stallions defense will feature senior returning corner Griffin Grutz, a reliable player who had 49 tackles and one interception last season.

San Juan Hills’ linebackers were a key part of their stingy defense last season and return one starter, senior Jacob Venegas. Venegas was second on the team in total tackles last year with 73 and tallied two sacks.

The South Coast League stretch is weeks away and the focus will be on a tough road matchup with Thousand Oaks in the season opener. When the team takes the field against the Lancers, Flowers and his staff plan on getting a lot of players into the game to figure out what works and what doesn’t.

“We’re hoping we can continue the momentum just by working hard on a daily basis. It’s going to be a game by game process for us,” Flowers said.