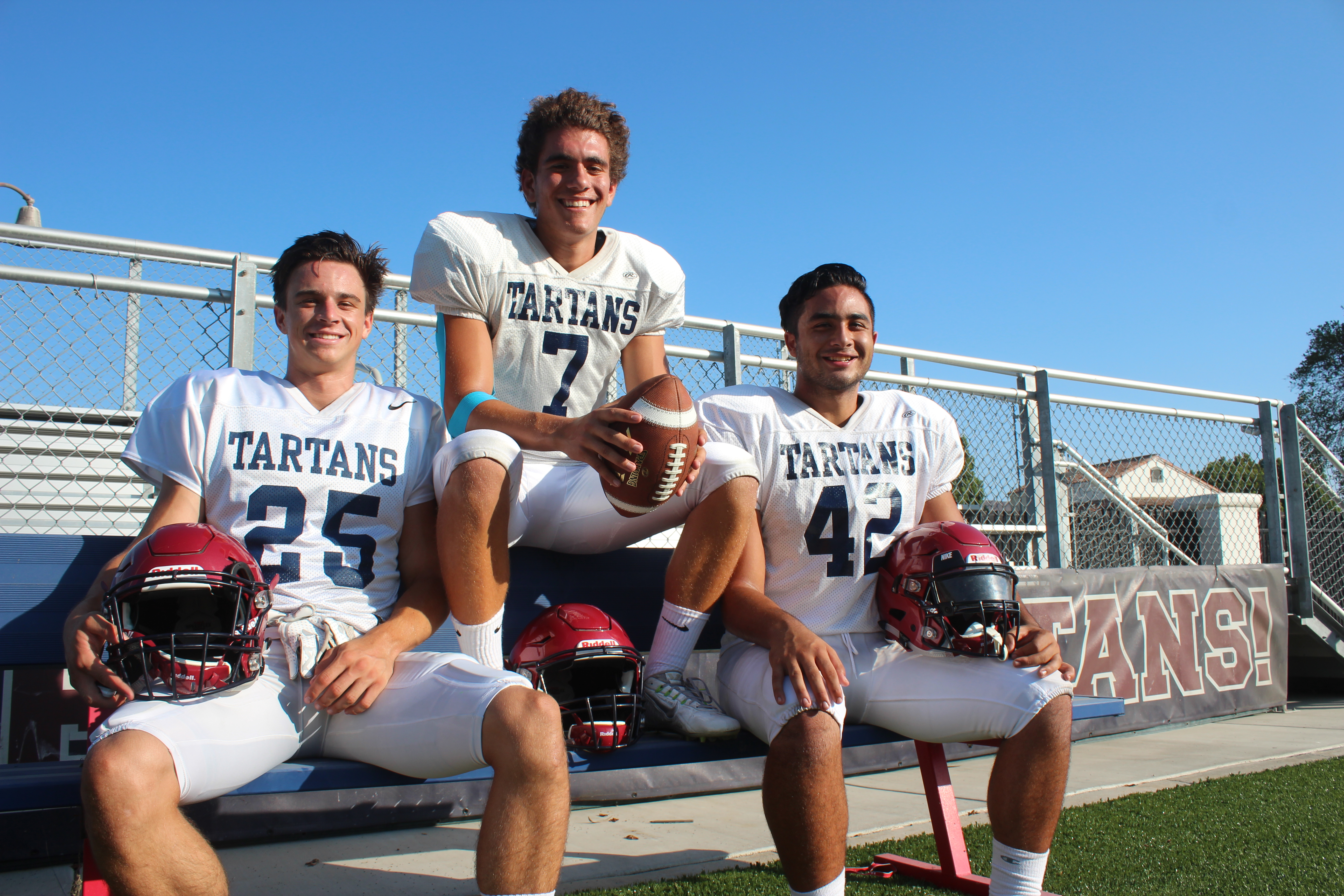 As part of our annual high school football season preview, we headed out to St. Margaret’s training camp.

As freshmen, Auston Locke and Nick Amoukhteh would get together and dream big.

Locke, a wide receiver for the St. Margaret’s football team, and Amoukhteh, a linebacker, are a pair of rare exceptions in high school football. Both got significant playing time as first-year players. During practices or after games, which, more often than not the Tartans won, Locke and Amoukhteh would ask each other the big question that lingers over many successful small-school programs.

“Wouldn’t that be great if we got to play the big public schools in the area?” Locke remembers asking his friend.

The two would see the wins and league titles pile up, and they helped St. Margaret’s capture a CIF-SS Championship in 2014. But it was always fun for them to ponder that lingering question.

Amoukhteh and Locke had to wait three years for that wishful thinking to turn into reality.

As part of the new CIF-SS divisional realignment, which was based on the previous two years’ results and strength of schedule rather than enrollment, the Tartans were moved up from Division 13 to Division 7 in 2016. They now have the opportunity to square off against county teams like Huntington Beach, Tustin and Canyon if they advance to the playoffs.

“It’s something we’re really looking forward to,” Amoukhteh said. “It’s been our goal since I was a freshman to be able to step up football-wise.”

“We really wished that we could play against those (bigger schools) and now we get the chance. We’re stoked,” Locke added.

The Tartans were members of the Academy League in 2015, but that league has been disbanded. That means St. Margaret’s will be considered a freelance league team and will have to earn an at-large playoff berth based on their performance and strength of schedule. The team could face a potentially tougher first-round opponent as a result.

The Tartans have big aspirations for the upcoming season, and for good reason. They will field an explosive offense, led by a 3,000-yard passer in senior quarterback George Krantz, and a veteran defense.

Krantz threw for 3,165 yards, completing just over 62 percent of his passes for 43 touchdowns to 13 interceptions. Krantz’s mark of 43 touchdown passes was the second-highest in Orange County last year.

The Tartans lost their most versatile weapon, receiver/running back Nick Shanks, to graduation. But the offensive depth chart this year looks well-rounded.

Locke, who caught 55 passes for 1,085 yards and 18 touchdowns last season, returns to lead a talented receiving corps that includes junior Ryan Cragun. Cragun, who head coach Stephen Barbee regarded as the Tartans best all-around player, broke his foot five weeks into the 2015 season and did not return but is back to full health.

“We have a lot of weapons. I’ve been playing with these guys since sophomore year and I know (Locke) can bail us out on fourth down situations and that (Cragun) has great hands,” Krantz said. “You can look at both sides of the field because you know you have all these weapons and you can just trust throwing to them.”

St. Margaret’s plans on using several running backs to fuel its high-flying offense in 2016. Barbee said sophomore Koa Todd and Marcus Knight, a transfer from Washington, are getting a majority of the touches in training camp.

The Tartans scored an average of 42 points per game last season. Even with the loss of Shanks, Barbee anticipates his offense will be able to keep its foot on the pedal.

“We’re very explosive on offense … (opponents) are going to double some guy and the other one is going to make you pay. It’s an exciting time right now,” Barbee said

The Tartans’ experience on defense figures to be a major strength. Amoukhteh, the team’s middle linebacker, has played in 42 varsity games. Two-way starters like Cragun and Todd add to a defensive unit that cut its teeth as underclassmen last season.

The Tartans may not have a league to play in, but they will be tested in several key games this season. A Sept. 16 matchup against Bishop’s of La Jolla and back-to-back games against Brethren Christian (Oct. 28) and Crean Lutheran (Nov. 4), two former Academy League rivals, highlight the schedule.

St. Margaret’s will certainly be testing unchartered waters in the coming months. They’ll be a freelance team with the chance to finally find out how they stack up against larger public schools in the postseason. First, they have to get there. But it is a scenario the program has looked forward to for a long time.

“For us, we’ve always gotten the knock that it’s a small school. Even though we’re playing in state title games and stuff like that, you still get the ‘You don’t play anybody.’ (remark),” Barbee said. “We’re ready to show that we play some good football down here … we have to focus on what we have at hand and take care of that and hope for the best on the playoff situation. Hopefully our body of work will speak for itself.”