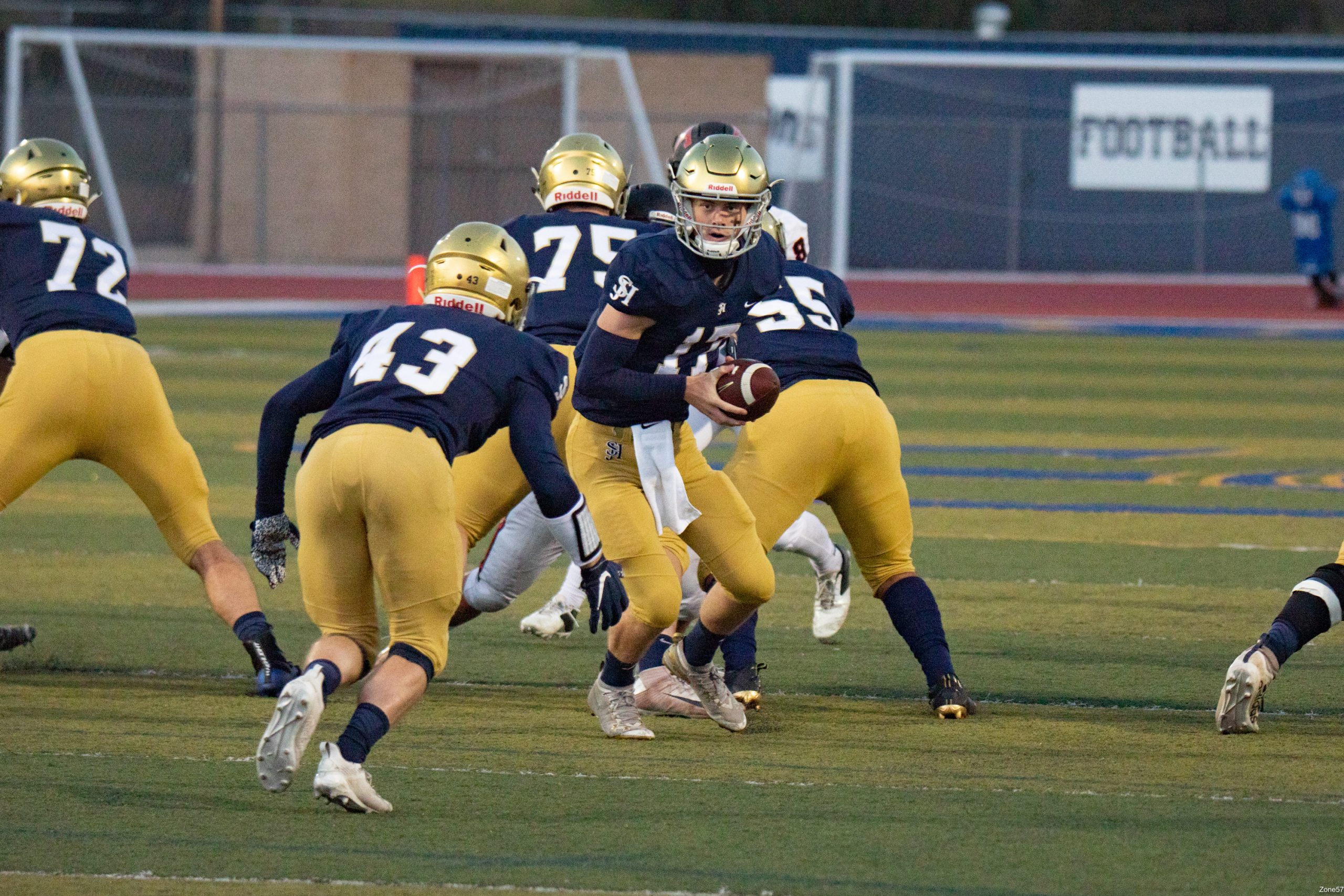 Without its top two receivers due to injury, San Juan Hills couldn’t muster the same offensive production, and San Clemente dominated both sides of the ball on its way to a 35-7 win in both teams’ South Coast League opener at the Badlands.

Coming off career nights for each in the first two games of the season, junior receivers Braden Pegan and Cole Monach were unavailable due to injury, so San Juan Hills (2-1, 0-1) committed to the running game early.

Of the Stallions’ 19 offensive plays in the first half, senior Brayden Burnes carried the ball 16 times for 61 yards. San Juan Hills attempted only three passes, all incompletions. Burnes had no carries in the second half. The second-half carries went to senior Nathan Grande, who ran 13 times for 49 yards.

In total, San Juan Hills put together 204 yards of offense. Senior quarterback Hudson Jones completed 11 of 22 passes for 109 yards and a touchdown. Jones and sophomore Colton Joseph were sacked a combined six times by San Clemente (3-0, 1-0).

Adding injury to insult, senior defensive star Elliott DeGroote was taken out early in the second quarter due to injury.

On the other side, San Clemente came back at San Juan Hills with a strong running game of its own. Arizona-bound senior James Bohls carried the ball 16 times for 177 yards and three touchdowns, and the Tritons put up 229 yards total on the ground. Junior quarterback Lachlan van Rosmalen was also solid, completing 15 of 21 passes for 163 yards and a touchdown.

San Clemente scored on its opening drive and opened up a 21-0 lead by halftime. The Tritons scored again in the third quarter for a 28-0 lead, but San Juan Hills finally found life in the fourth quarter.

The Stallions capped off a 13-play drive with a 5-yard touchdown pass from Jones to senior Dashiel Ross with just over 10 minutes left in the game. In an attempt to capitalize on its momentum, San Juan Hills tried an onside kick, and senior Billy Hester recovered it for the Stallions in San Clemente territory.

However, the late Stallions push was quashed after a fourth-down sack, and a 45-yard touchdown by Bohls on the ensuing drive iced the game, 35-7.

The road only gets tougher for the Stallions as they travel to Mission Viejo on Friday, April 9. San Juan Hills returns home to close the season in the “Battle of the Bell” against Tesoro on April 16.

The St. Margaret’s football team had some hard luck in its short season.

First, its season was so short. While many local schools got to play out five- or six-game seasons with a full league schedule, St. Margaret’s was limited to only three nonleague games, due to many of its regular opponents being unavailable or shelving their football teams for this season.

Second, the results were disappointing. The Tartans were up 16-0 at halftime in their opener before losing to Estancia, 35-16, and senior night in their only home game of the season was spoiled by Rancho Christian, 53-36.

However, St. Margaret’s battled and found a sliver of light to end its 2020-21 campaign.

St. Margaret’s led 13-0 at halftime and held off a second-half push by Westminster to claim a win in their its finale, 19-13, on Thursday, April 1, at Westminster High School.

Quarterback Jack Ruff paced St. Margaret’s (1-2) and completed 5 of 15 passes for 174 yards and two touchdowns, including an 80-yard TD pass to Bobby Springer. Trey Kingsley caught three passes for 79 yards, including Ruff’s other TD pass. Running back Benton Barlow provided the other scoring for the Tartans with two touchdowns and 79 yards on 26 carries.

St. Margaret’s now looks forward to a summer to regroup and come back in a regular fall season with a full roster.