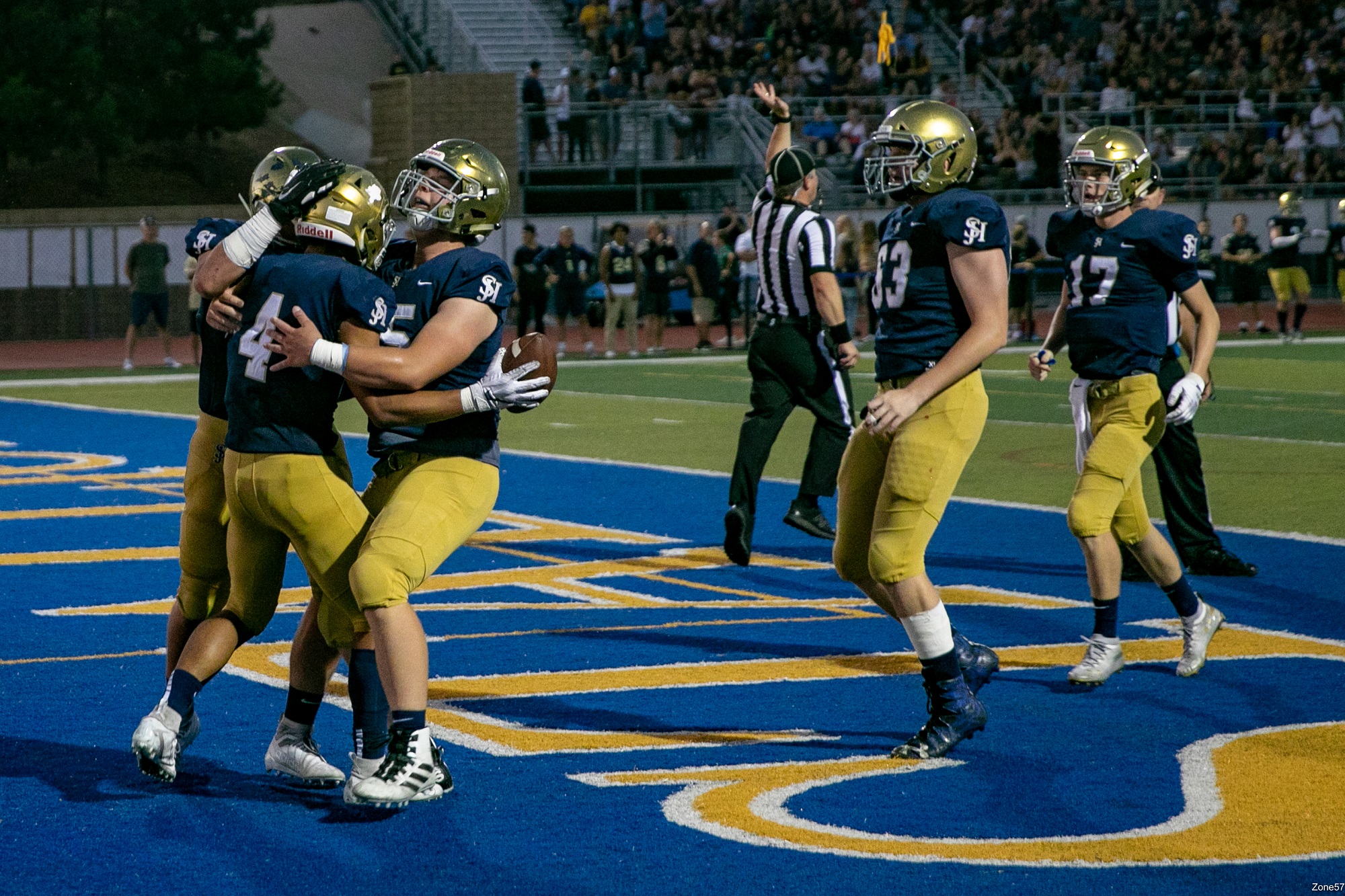 San Juan Hills and JSerra each opened their league campaigns with strong wins, while St. Margaret’s, Capistrano Valley Christian and Saddleback Valley Christian each have one more week before San Joaquin play begins.

Let’s take a ride around town, and check in on each of the five teams:

The Stallions (4-3, 1-0) have put up back-to-back dominant efforts and look ready to defend their Sea View League championship or even repeat for the title.

San Juan Hills continues to put up a balanced offensive attack, as quarterback Hudson Jones has thrown for seven touchdowns in the past two games and running back Austin Hogan has rushed for close to 300 yards over the two wins.

Two-way star Joey Hobert put on a show in the league opener against Trabuco Hills with three touchdown receptions and two interceptions, including a pick-six. Hobert had 114 yards receiving on eight catches and 145 return yards on two interceptions.

Next up for San Juan Hills, No. 5 in Division 4, is what should amount to the Sea View League title game at Aliso Niguel on Friday, Oct. 11.

The Wolverines (5-1, 0-0) have put up points this season with an average of nearly 37 per game. Quarterback Kyle Kyckelhahn has paced Aliso Niguel with nearly 300 yards passing per game, with 18 touchdowns with only one interception.

Aliso Niguel, No. 1 in Division 8, finished second in the Sea View League last season with its lone loss a shutout at San Juan Hills, 38-0.

Opening Trinity League play off the Lions’ bye week, it took a while for JSerra (5-1, 1-0) to get rolling, with only a 7-3 lead over Santa Margarita at halftime. JSerra came out with 28 points in the third quarter to secure the 35-3 win on homecoming night.

Sammy Green ran for 109 yards on 13 carries with three touchdowns, Chris Street scored on a seven-yard run on his only carry, and Malaki Te’o scored on a fumble recovery off a Jaden Genova sack.

JSerra struggled with consistency during its nonleague schedule, and its league-opening win won’t dispel that concern. However, the Lions needs to get sorted out in quick order.

JSerra hosts St. John Bosco, ranked No. 2 in the nation by MaxPreps and No. 3 by USA Today, on Friday, Oct. 11, and the Braves won’t be looking past JSerra.

The Lions gave Bosco a scare last season in a one-score game in Bellflower, and the Braves should have their focus turned up after surviving by just a point over Servite last week, 27-26.

On the other hand, JSerra has confidence after playing Bosco tight on the road last season, and Servite’s performance shows that the Braves could be had on the right night.

Friday’s game against St. John Bosco will be JSerra’s last home game of the regular season. JSerra plays Servite at Orange Coast College next Thursday and back-to-back games at Santa Ana Stadium against Orange Lutheran on Oct. 25 and national No. 1 Mater Dei on Nov. 1.

The Tartans (6-0, 0-0) are keeping sharp and maintaining their undefeated mark.

For St. Margaret’s, it’s all about maintaining that focus as the Tartans shouldn’t face a real test in their final nonleague game on Friday, Oct. 11 against St. Joseph of Santa Maria or in their three San Joaquin League games beginning on Oct. 18 at home against Saddleback Valley Christian.

The Tartans are getting it done through the air with a main connection between quarterback Jake Carreon and receiver Will Kenner. Carreon, a transfer from San Juan Hills, completed all 10 passes he attempted against Bellflower for 254 yards, and Kenner caught seven passes for 197 yards and four touchdowns.

According to the Orange County Register, Kenner is leading the county in touchdown receptions with 14 and is second in the county in receiving yards with 866.

After playing SVC, St. Margaret’s finishes on the road at the Webb Schools in Claremont on Oct. 25 and against Capistrano Valley Christian on Nov. 1 at San Clemente High School.

The Eagles (4-2, 0-0) have won three in a row in a dominant fashion and look ready to compete for a playoff spot in the San Joaquin League.

CVC enjoyed a bye week last week after a 62-13 win over Mark Keppel of Alhambra.

Demongin has been the workhorse for the Eagles with 796 yards on 105 carries and 11 touchdowns this season, averaging more than 130 yards per game on the ground.

The Warriors (2-4, 0-0) captured their second win of the season in dramatic fashion on Saturday, Oct. 5.

At Trabuco Hills High School against Bishop Montgomery of Torrance, SVC trailed by eight points late in the fourth quarter.

Evan Spry ran for a touchdown with under a minute to play, and on a two-point conversion, Spry completed a pass to Zeke Greene to tie the game and send it to overtime.

The Warriors got the ball first in overtime and scored, but a two-point conversion attempt failed. With only a six-point lead, SVC needed a defensive stop and got it, as Matthew House forced a fumble and D’artagnan Robison recovered it for the win.

The Warriors play at Pasadena Poly on Friday, Oct. 11 and open league at St. Margaret’s on Oct. 18.