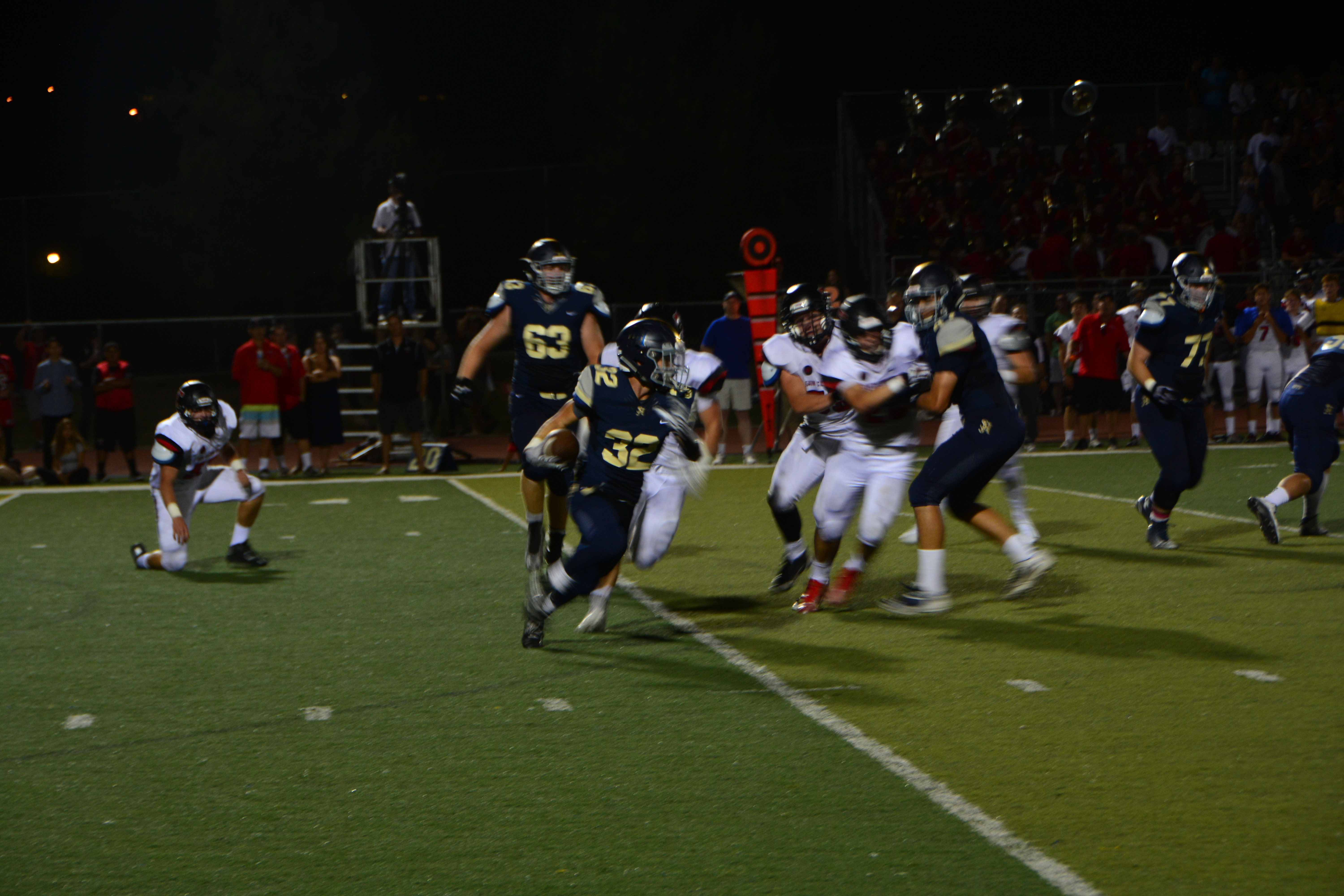 San Juan Hills’ senior quarterback Patrick O’Brien and junior receiver Jacob Huff wanted to take the strong connection they formed on the field last year and carry it into the new season. When the Stallions hosted San Clemente on Aug. 28 in both teams’ season opener, the two looked like they were already in midseason form and definitely on the same page.

O’Brien and Huff shined in the opening half, linking up for two touchdown passes and igniting an offense that smoothly produced a 34-20 victory over the top-ranked team in the CIF-SS Southwest Division.

O’Brien, a Nebraska commit, completed 30 of 37 passes for 319 yards and three touchdowns. Huff, who caught touchdown passes from two- and 11-yards out on the Stallions first two drives to build a 13-0 lead, reeled in 16 catches for 201 yards.

The Tritons were held scoreless in the first half and, despite outscoring San Juan Hills 20-7 over the final two quarters, had no answer for the Stallions balanced first-half offensive attack, which also featured three running backs piling up 84 combined yards.

“We wanted to prove something tonight. I feel like we did that. San Clemente, they came back in the second half and played a great game … every guy deserves this win,” O’Brien said.

San Clemente (0-1) could not sustain any of their early drives and the Stallions defense, led by linemen Jared Aviles, Eman Talle and JJ Glass, got to the Tritons junior starting quarterback Jack Sears early in the game.

Many of the Tritons’ woes were self-inflicted.

A costly Sears fumble that was recovered by San Juan Hills inside their own 10-yard line halted what could have been a game-tying drive by San Clemente. O’Brien quickly led his team down the field for a scoring drive and a 13-0 lead.

On the Tritons next possession, Sears hit senior running back Vlad Dzhabiyev for a 60-yard pass that would have been a touchdown, if not for the holding call against San Clemente that brought it all the way back.

“It’s a game of momentum and we lost the turnover battle tonight,” San Clemente head coach Jaime Ortiz said. “It’s not physical, it’s more mental, about making sure we are disciplined … In a game like this, when you spot San Juan Hills 20 points it comes back to bite you.”

A Tim Newman touchdown run and an eight-yard scoring strike from O’Brien to Cayden McCluskey put San Juan Hills up 27-0 and the game ultimately out of reach.

San Clemente got on the board in the third quarter following an interception returned for a touchdown by sophomore cornerback Branden Wilson.

In the fourth quarter Sears broke through for a 59-yard scrambling touchdown run and on San Clemente’s next possession, found Dzhabiyev for an eight-yard touchdown pass that made it 34-20. Sears, in his first varsity start, went 10-19 for 105 yards, a touchdown and an interception. He led the game in rushing yards, taking 14 carries for 175 yards and a touchdown.