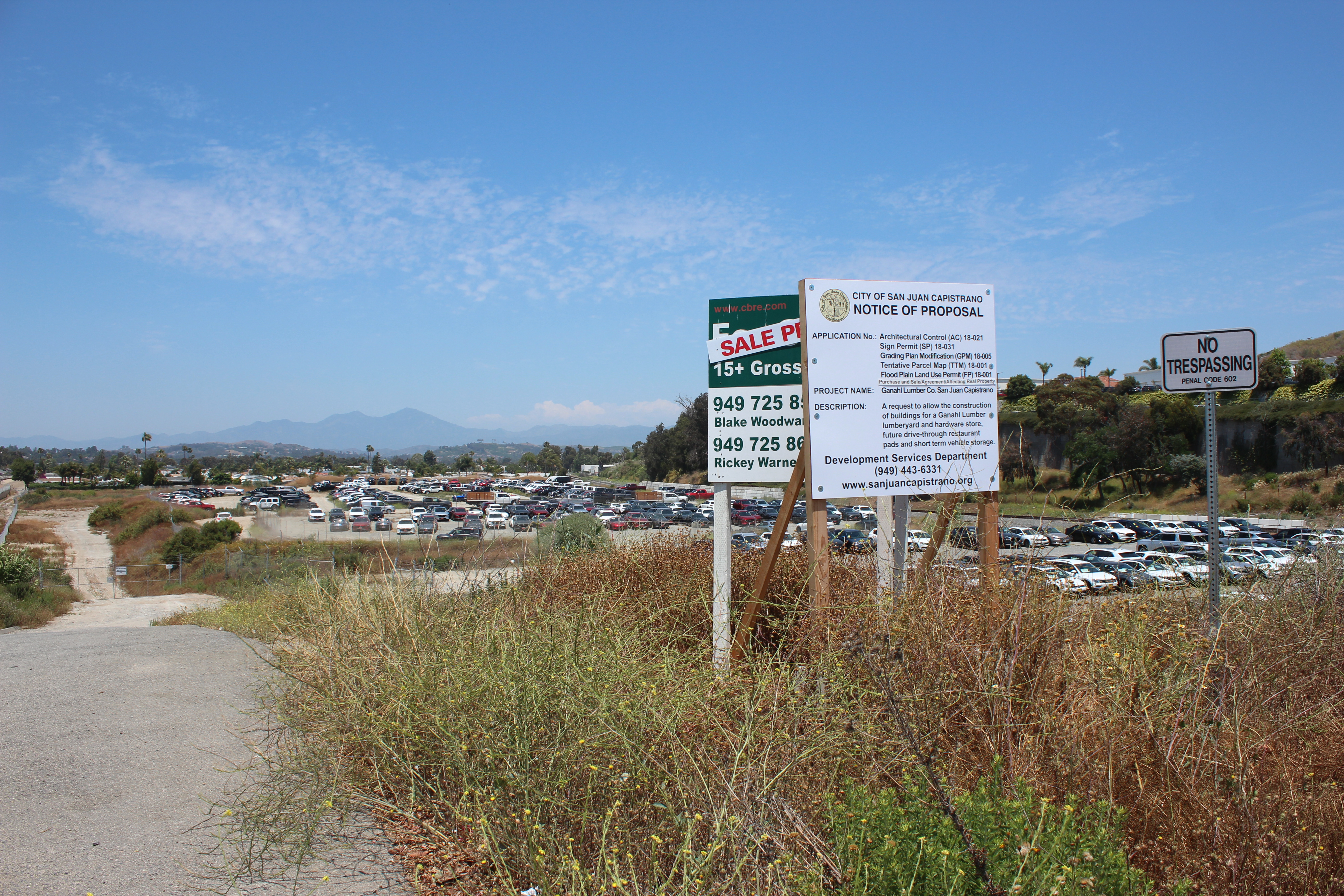 The proposed Ganahl project at 25865 Stonehill Drive will feature a lumber hardware store and lumber yard with 15 structures; the potential development of two drive-through restaurants; and a crushed-rock gravel area for long-term vehicle storage for nearby auto dealers. The site is currently vacant and used for overflow parking by local auto dealers.

“This represents the culmination of a multi-year process and a very critical project for the City of San Juan Capistrano,” City Manager Ben Siegel said.

The council also approved environmental findings, a flood plain land-use permit and a tentative tract map related to the project. The project has gone through various steps before the council’s resolution of intent to sell, including an exclusive negotiation agreement in August 2017 and the selection of a California Environmental Quality Act (CEQA) consultant.

The City of San Juan Capistrano is working with the City of Dana Point on one aspect of the project, since identified traffic impacts at the intersection of Stonehill Drive and Del Obispo Street are in an area shared with Dana Point.

A sales transaction is expected to come back before the council during a future meeting. The city will receive only a portion of the proceeds of the sale, about 10%. The remaining sale revenue will go to other entities, including the County of Orange and Orange County Fire Authority.

“I want to thank the staff for a very complex transaction. I know there’s a lot of different agencies and cities (involved) and the amount of work it takes to get this done,” Mayor Pro Tem John Taylor said. “It’s been a long time. When I was on council before, I’ve seen so many different things offered up for that property, and I just want to welcome Ganahl. It’s going to be great for the trades that are going to work in this area.”

Mayor Troy Bourne said the collaboration with Dana Point will be beneficial, because people often ask what can be done about traffic issues.

The June 2 meeting was the first one in a while that opened the council chambers to the public. The chambers have recently been closed during public meetings due to the COVID-19 pandemic. People who attended the meeting were required to wear face masks, and everyone in attendance complied.

Hand sanitizer and face masks were also provided at the meeting, and only certain audience seats were open as part of social distancing measures. The June 2 meeting did not draw a large crowd. Councilmembers have recently conducted meetings by teleconference during the chamber closures.

Councilmember Sergio Farias addressed recent national unrest stemming from protests against racial injustice following the death of George Floyd and fallout from the pandemic, during his councilmember report at the end of the meeting. A Black Lives Matter protest is scheduled in San Juan Capistrano on Wednesday, June 3, at Historic Town Center Park at 4 p.m.

“I personally stand against systemic racism. We’re going through some very difficult times as a country right now, as a city, with a pandemic,” Farias said. “People’s livelihoods are almost gone. People don’t have jobs. These are very tough times we’re living in. Exercise your First Amendment rights but I absolutely condemn looting. There’s no place for violence in our society. The comments that are coming from the white House aren’t comments I’d like to see coming from the president in our country.”

Farias thanked residents in South Orange County who peacefully protested and the Orange County Sheriff’s Department for keeping people safe during protests. A recent protest in San Clemente was peaceful with no reports of arrest, property damage or injuries. Other protests throughout the country have resulted in violence and looting, though some have been peaceful. President Donald Trump has made remarks calling for forceful action against violent protests, which has drawn criticism.

The city is expecting financial impacts from the pandemic and subsequent economic crisis.

The council also approved a temporary closure on Thursday, June 4, of the recently renovated Verdugo Street to accommodate a downtown drive-through parade for graduating seniors that day. Graduation ceremonies have been upended due to the pandemic, and schools and the community are variously celebrating graduation in different ways.