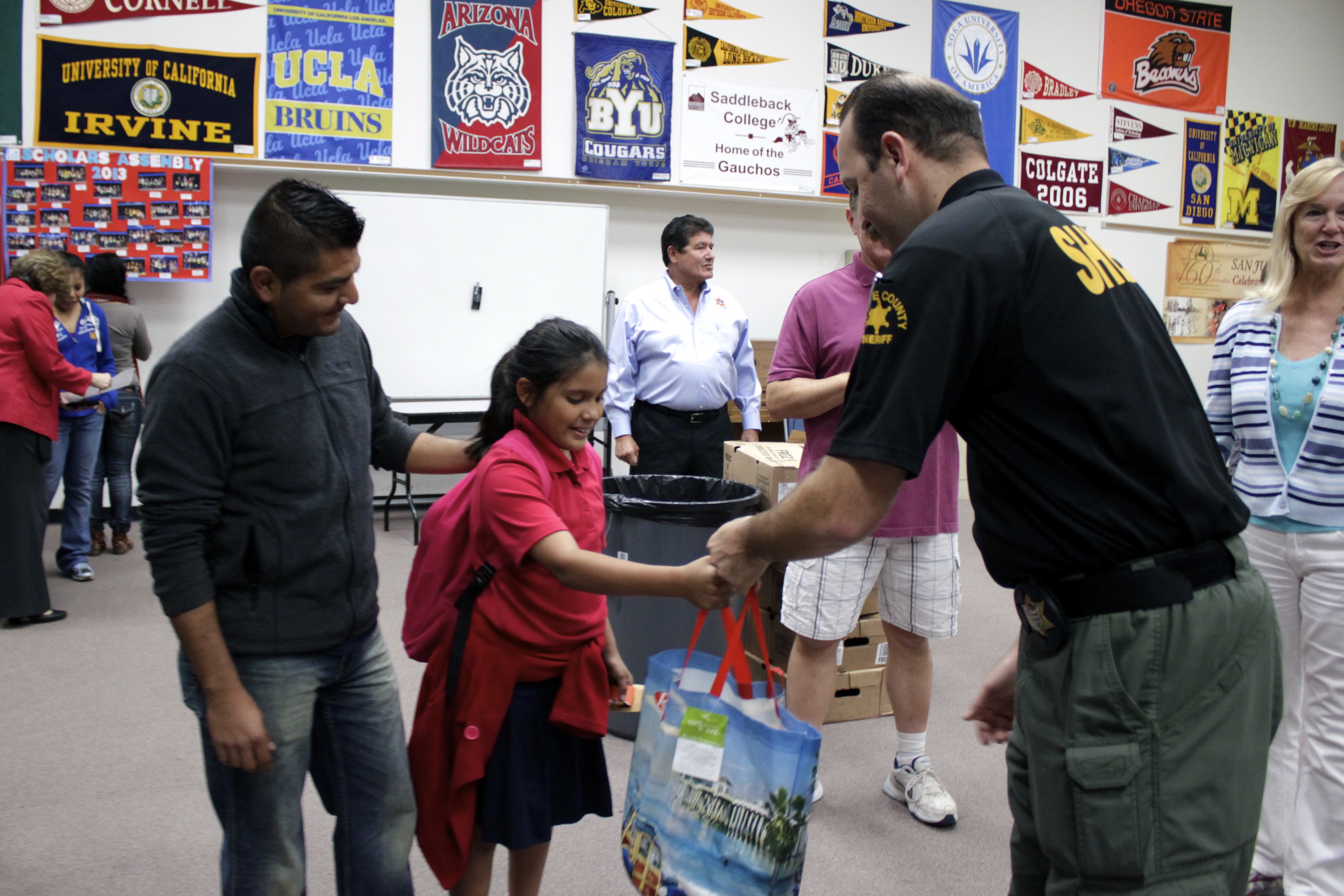 Getting a GRIP on Gangs

Thanksgiving is less than a week away, but some San Juan Capistrano students have already received their full serving of gratitude—along with a traditional holiday feast—for all their work in their classrooms.

On Wednesday, November 20, more than 800 at-risk students at 43 elementary and middle schools across the county were given high-fives, hugs and full Thanksgiving turkey dinners to feed their families, as part of the Orange County Gang Reduction Intervention Partnership.

Officials from the county District Attorney’s office, along with the Sheriff’s, police and probation departments, joined with school administrators and volunteers to hand out the meals to students who had successfully met goals laid out at the beginning of the school year by GRIP. In San Juan Capistrano, students and their families were met with applause as they came to receive their Thanksgiving meals at San Juan, Del Obispo and Kinoshita elementary schools.

“They said that if you made good decisions you’d win a turkey for your whole family. That made me feel happy and kind of sad because the turkey is big and we don’t know what to do with it,” said Jaime Ramirez, a fifth-grader at San Juan Elementary. “It made me feel really excited because my mom really works hard for us.”

More than 1,000 students, identified to be at-risk of joining a gang, were given the challenge of improving their behavior, grades and attendance. Since starting in 2008, GRIP has administered a number of incentive programs to steer elementary and middle school students away from gangs. In addition to the Thanksgiving challenge, which is in its fourth year, GRIP sets similar goals for students for a chance to meet Anaheim Angels baseball players and take in a game at Angel Stadium annually.

But the Thanksgiving challenge provides a unique opportunity for students, according to GRIP Director and Deputy District Attorney Tracy Rinauro.

The meals, which cost more than $25,000 and were donated by Ralphs/Food 4 Less and Saddleback Church, are large enough to feed a family of 10 and include all the traditional Thanksgiving fixings.

In speaking with the students at the beginning of the school year, Rinauro said many of them said they had never had a traditional Thanksgiving dinner. She recalled one instance when a student was overcome with emotion at the chance to help feed his family.

“We presented it to an eighth-grade boy and he started crying,” Rinauro said. “He had tears in his eyes because we had asked the students to close their eyes and imagine what it would be like to earn that goal and win something for their families.”

Kayla Teliz, a fourth-grader at San Juan Elementary, said she was surprised when she learned she’d be receiving a full meal for her family.

“I told my mom first and she was surprised. She said, ‘Wow. We don’t have to buy the turkey anymore,’” said Teliz. “Turkey is my favorite Thanksgiving food, but what I like most (about Thanksgiving) is having fun with our families.”

In addition to meeting with students, local GRIP committees, made up of teachers, law enforcement officials and community volunteers, reach out to their families. Rinauro said it is important to open a dialogue with parents and guardians, who are either unaware their children are susceptible to gangs or do not know what to do.

“This program tries to show that law enforcement cares about them, that they want to be a part of the solution and they don’t want to be arresting them at the other end,” Rinauro said.

There are more than 300 organized criminal street gangs in Orange County and approximately 13,000 active participants, according to Rinauro, who spent several years prosecuting gangs before GRIP. San Juan Capistrano is home to one recognized gang, according to Lt. John Meyer, the city’s chief of police services. The city is also one of only six in the county to have permanent gang injunctions, civil court orders that prohibit documented gang members from participating in activities that aren’t necessarily criminal, like harassment and intimidation, within a designated area. San Juan Capistrano has two gang injunction areas, one located just south of Capistrano Valley High School and another, larger zone, between Junipero Serra Road and Del Obispo Street.

Rinauro and Meyer both said programs like GRIP have to reach out to elementary and middle school students because by the time they get to high school, it is often too late. Although young children aren’t always identified as active gang members, they are often recruited or pressured by older members to sell drugs or act as lookouts for law enforcement.

“GRIP is not about the active gang members. It’s about the kids who are still impressionable, who still have a choice, and it’s about steering them away from that funnel,” Meyer said. “The pressure these kids deal with is enormous. Do they still want to be an accepted member of the group or do they want to be an outcast? That’s why outreach is so critically important. They need to know that there are people here who care about them, who want to reward them for positive decisions.”

Gang injunctions in San Juan Capistrano were met with pushback by the residents living within them, largely Latino communities, according to former mayor Joe Soto, who sat on the City Council when they were first put in place and when GRIP was implemented. Soto, the city’s first Latino mayor, said many in the community felt they were being targeted by the injunctions.

“It was a tough pill to swallow for the Latino community,” Soto said. “There was quite a bit of resistance from those communities.”

Changes in attitude, however, eventually came with consistent results. Through GRIP and local outreach programs, Soto said Latino residents began to see a concerted effort from law enforcement officials and the benefits to the youth.

“Beat officers became more receptive to the concerns of the Latino community, and they began to develop bonds and friendships,” Soto said. “Whereas before they would only show up if there was a major problem, they began to patrol and made it a point to stop, get out of their vehicles and chat with kids. That barrier was broken in a very positive way.”

Indeed, things have changed in these neighborhoods, according to Meyer. As he and his deputies have taken up more outreach efforts, like crime prevention meetings and greeter programs, Meyer said residents have begun to communicate more openly with his deputies.

“We’re starting to get more people in these communities calling us. Sometimes it’s anonymous, but nonetheless, they’re important calls that will help us to solve crimes or to be present when crimes are occurring. People know that we care,” Meyer said.