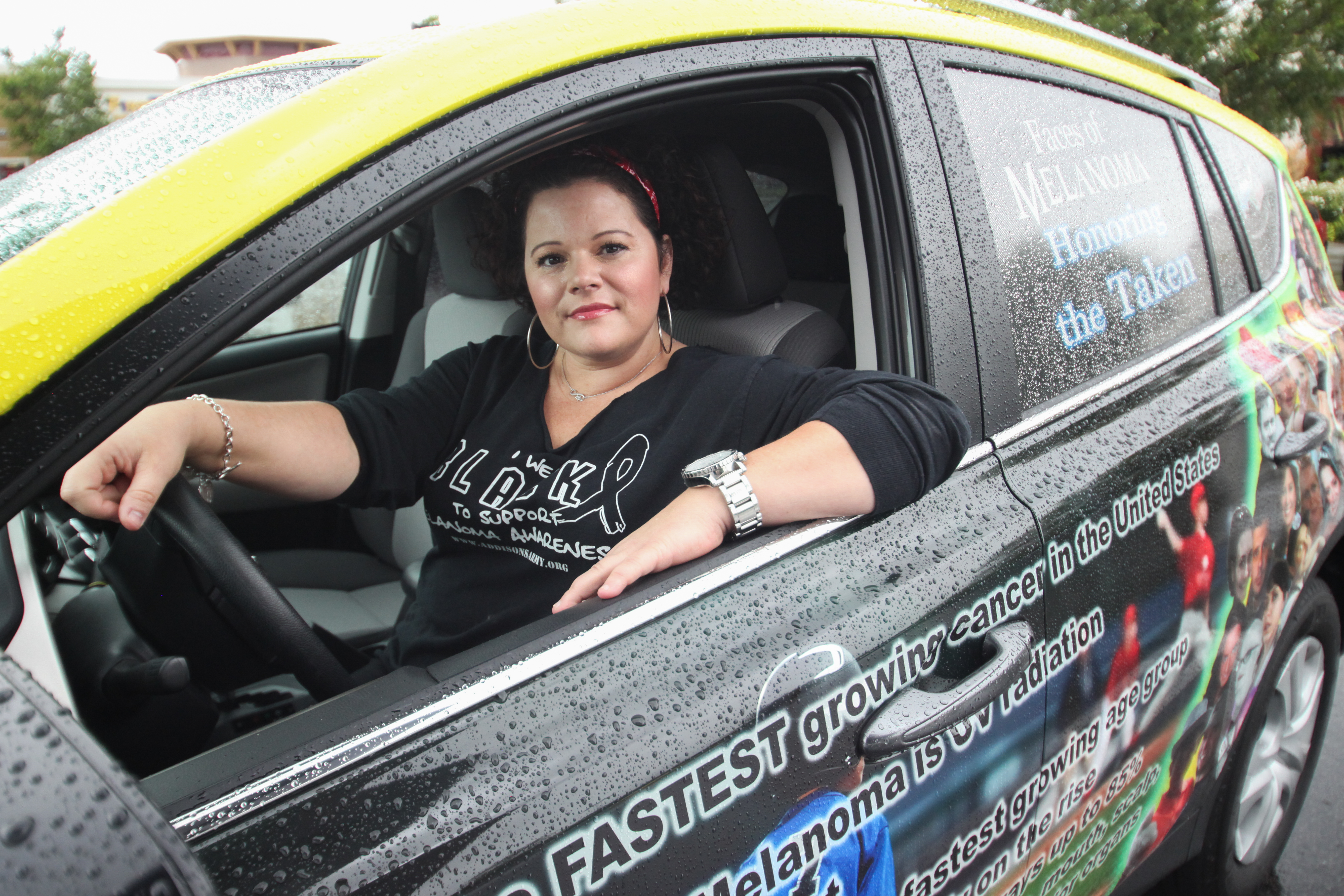 Kristi Donahue has dedicated her life to raising awareness about melanoma

It started with a tiny mole on her neck. Kristi Donahue had known it was there her whole life, but it was when she was pregnant with her second son, at the age of 38, that her friends began asking her if it was new.

It wasn’t, of course, but she decided to look back at some old photographs anyway. That’s when she noticed how black her once light-colored mole had become.

After a year of visits to her practitioner, she finally got the news—it was melanoma.

Donahue admits she didn’t know much about skin cancer at the time. Born in Anaheim and raised in Dana Point, Donahue grew up much like other SoCal kids, always playing in the sun. During her elementary and junior high school years, she’d often tanned out on the beach with friends, in the backyard with baby oil or, after she turned 15, at tanning salons.

“I went to tanning salons up until my diagnosis at 38,” Donahue recalls. “I knew nothing about what a vicious killer it is, nor did I know it’s the fastest growing cancer in the world.”

In the year following her surgery and recovery, Donahue said she, like many who go through the isolating experience, tip-toed around the subject of melanoma. For 25 years, she’s worked as a barber at Stew’s Barber Shop in Ladera Ranch, and she began feeling the urge to let her clients know when they had a suspicious mole or blemish with red flags.

About two years ago, Donahue had a new client come in, and while cutting his hair, she noticed a mole on his scalp. Taking a chance, she offered up the knowledge and asked if he had ever had it looked at. Her client, Eric, said no. She told him it might be nothing, but that he could get it checked at the dermatologist across the street. He went straight to the doctor from his hair appointment. They did a biopsy that same day, and two weeks later, Eric got the call that it was melanoma.

Eric was 33 at the time, and after coming out of surgery, he was told by his oncologist that had he waited a month longer to get it checked out, he would have been gone within a year—the melanoma had very nearly penetrated the final membrane protecting his brain.

“It was that situation that really set me on fire,” Donahue said. “He came in later with tears in his eyes, and said, ‘If it wasn’t for you, I probably wouldn’t be here next year.’ Here’s this man, looking at me with tears in his eyes—he doesn’t even know me—and he says thank you for coming out of your comfort zone.”

Since then, Donahue’s life has been about breaking boundaries and stepping out of that comfort zone. Within a week, Donahue transformed her barber station, filling it to the brim with “an arsenal of information” of fact sheets, dermatologist cards and sunscreen packets. She began pouring her heart and soul into her Facebook page, transforming her personal site into an educational forum and a welcoming meeting space for people newly-diagnosed or battling melanoma. With more than 2,500 friends now, her open page is no longer about her own life—it’s filled with the stories of others struggling with the disease, many in their teens, 20s or 30s.

Perhaps the most noticeable move for Donahue was having her brand new Toyota Rav4 professionally wrapped with facts, photos and other melanoma-related imagery.

“The car was really born out of sheer frustration,” Donahue said. “I kept seeing people come into the barbershop, burnt to a crisp, and most of them don’t want to talk about it. I’d get frustrated when I went home at night and would see people continuing to lose their battles.”

Donahue went to Speedpro Imaging Coastal OC in Fountain Valley to have her one-of-a-kind ride designed and wrapped. In January, “Hope the Melanoma Mobile” was born. Since then, she’s been giving impromptu classes about melanoma to those intrigued by the images and facts on her car—like the image of a tanning bed on the side door, letting passersby know that the luminous beds have been classified by the World Health Organization as a class one carcinogen.

“If you tan indoors before the age of 35, you increase your chances by 75 percent of getting melanoma,” Donahue said. “Tanning beds are to skin as cigarettes are to lungs.”

Donahue also has collages on her car—photos she’s compiled from her Facebook page of youth and adults who are either fighting melanoma or have already lost their battle. She knows every name and story behind their smiling faces, most of whom are children and teens.

“I have seen so many people lose their battles—beautiful young men and women. It’s terrifying,” Donahue said. “It’s absolutely one of the most vicious, ruthless, non-discriminating diseases out there.”

With her amassed knowledge and ever-burning passion for spreading awareness, Donahue was recently selected by the Melanoma Research Foundation to speak to Congress about melanoma, specifically the alarming rate of pediatric diagnoses. As a single mom living in San Juan with her two sons, she’s always checking them, head to toe, for any changes. She’s been keeping an especially close eye on a mole atop her 4-year-old son’s scalp—it was during her pregnancy with him that her own melanoma came into being.

“It’s scary, especially because it was my pregnancy with him that brought my melanoma on, and because I know it can transfer. You get extra concerned about it,” she said.

Today, Donahue isn’t shy with her clients. She’ll tell them right off the bat if something looks awry, especially on the head of a child. If she gets a teenager in her chair, she’ll utilize the entire haircut to educate them about wearing sunscreen. Her coworkers may laugh at her, and parents may roll their eyes, but she knows the value of educating others—of being loud.

“This isn’t the type of disease to sugarcoat,” Donahue said. “You have to really jolt people into reality.”

May is Melanoma Awareness Month. For free information on melanoma and identifying signs of the disease, visit the Melanoma Research Foundation at www.melanoma.org. Donahue’s Facebook page can be found at Kristi Nyhuis Donahue.