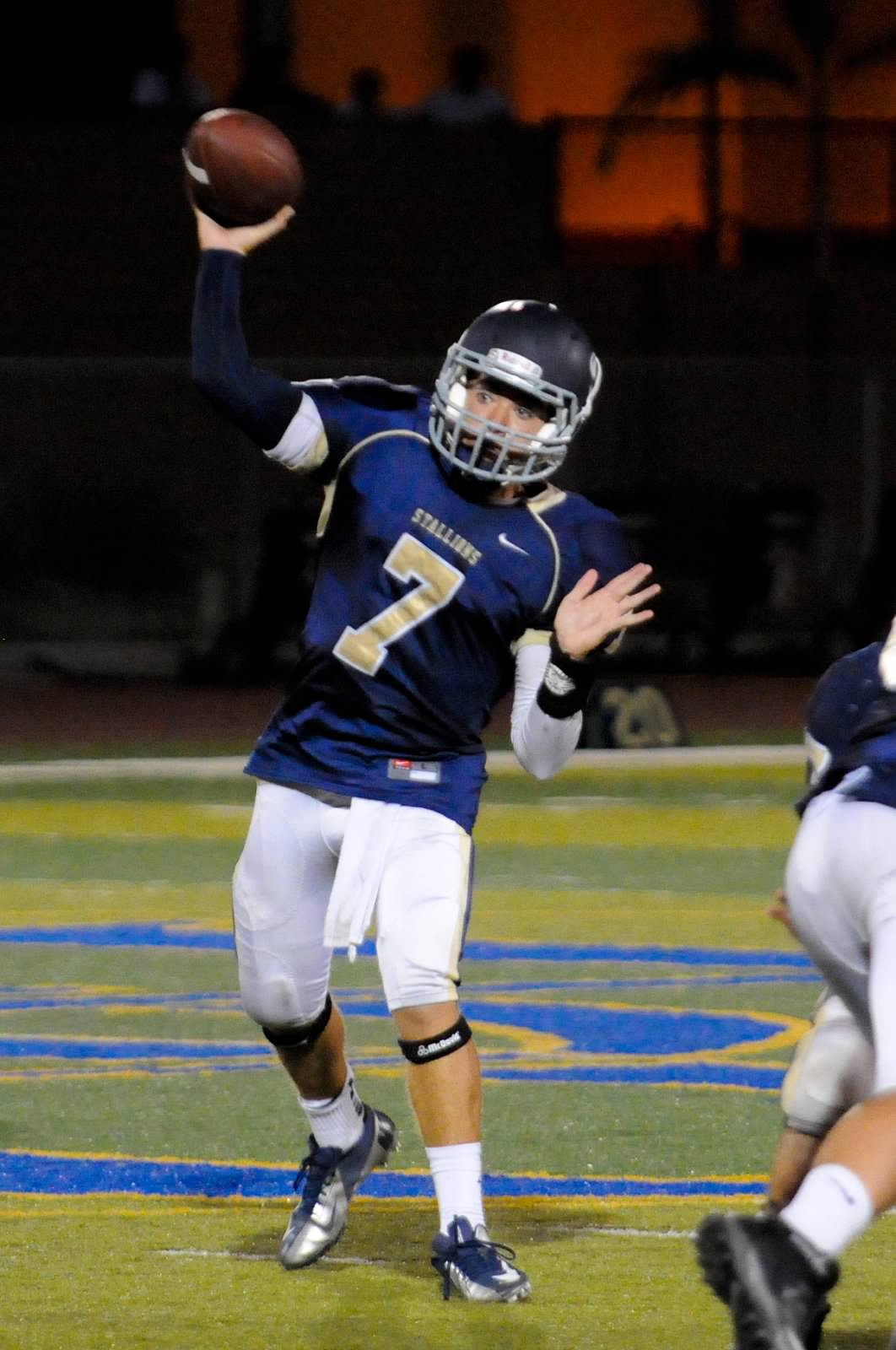 It was apparent from the first offensive snap of Friday’s Sea View League game between visiting San Juan Hills and Aliso Niguel that Stallions quarterback Jacob Gibson and his receivers were on the same page.

A play action pass on the first play from scrimmage fooled the Wolverines defenders, who bit hard and collapsed to the middle of the field, leaving senior wide receiver Matthew Mucerino wide open down the sideline. Gibson, as would be the theme of the night, hit Mucerino in stride for a 58-yard touchdown pass. It would be the first of five touchdown passes tossed by Gibson in a game that saw his team emerge victorious, 46-6.

The Stallions (7-1, 2-0 league) have now won two league games in a row, improving on last year’s one league-win effort.

Mucerino caught four touchdown passes on the night and reel in six catches for 187 yards. With just over six minutes to go before the end of the first half and San Juan Hills holding a 15-0 lead, Gibson, Mucerino and the Stallions offense was able to put together two scoring drives. Both ended in Mucerino touchdown catches, from 15 and 12 yards out, respectively.

“I just felt comfortable. I trusted my man Matt Mucerino, who made some great plays and we just executed,” Gibson said.

San Juan Hills has made their mark this year behind a strong running attack. While senior Brad Kremer (11 carries, 67 yards) and junior Mike Miscione (11 carries, 62 yards) still rushed effectively, the Wolverines defensive plan was to blitz often and stuff up the middle and let Gibson and the receivers beat them rather than the running backs. Turns out, the senior and his receivers were up to the task. Gibson completed 16 out of 20 pass attempts and threw for 318 yards. His only blemish was an interception thrown just before halftime.

Aliso Niguel struggled to maintain drives but finally broke through for a score on their first drive of the second half when senior running back Ryan Walker found a hole and burst for a 68-yard touchdown run. By that time San Juan Hills already held was seemed like an insurmountable 29-6 lead.

The San Juan Hills defense held the Wolverines to 171 total yards of offense.

San Juan Hills will host Capistrano Valley (5-3, 1-1) on November 1, which will be an important litmus test for both teams. The Cougars are defending co-league champions while the Stallions are trying to emerge as the league’s breakout team.

“I’m glad we got to this point. When we went 1-3 in league last year it was a hollow feeling for this team. Now they’ve put themselves in a position to get what they want,” San Juan Hills head coach Aaron Flowers said.