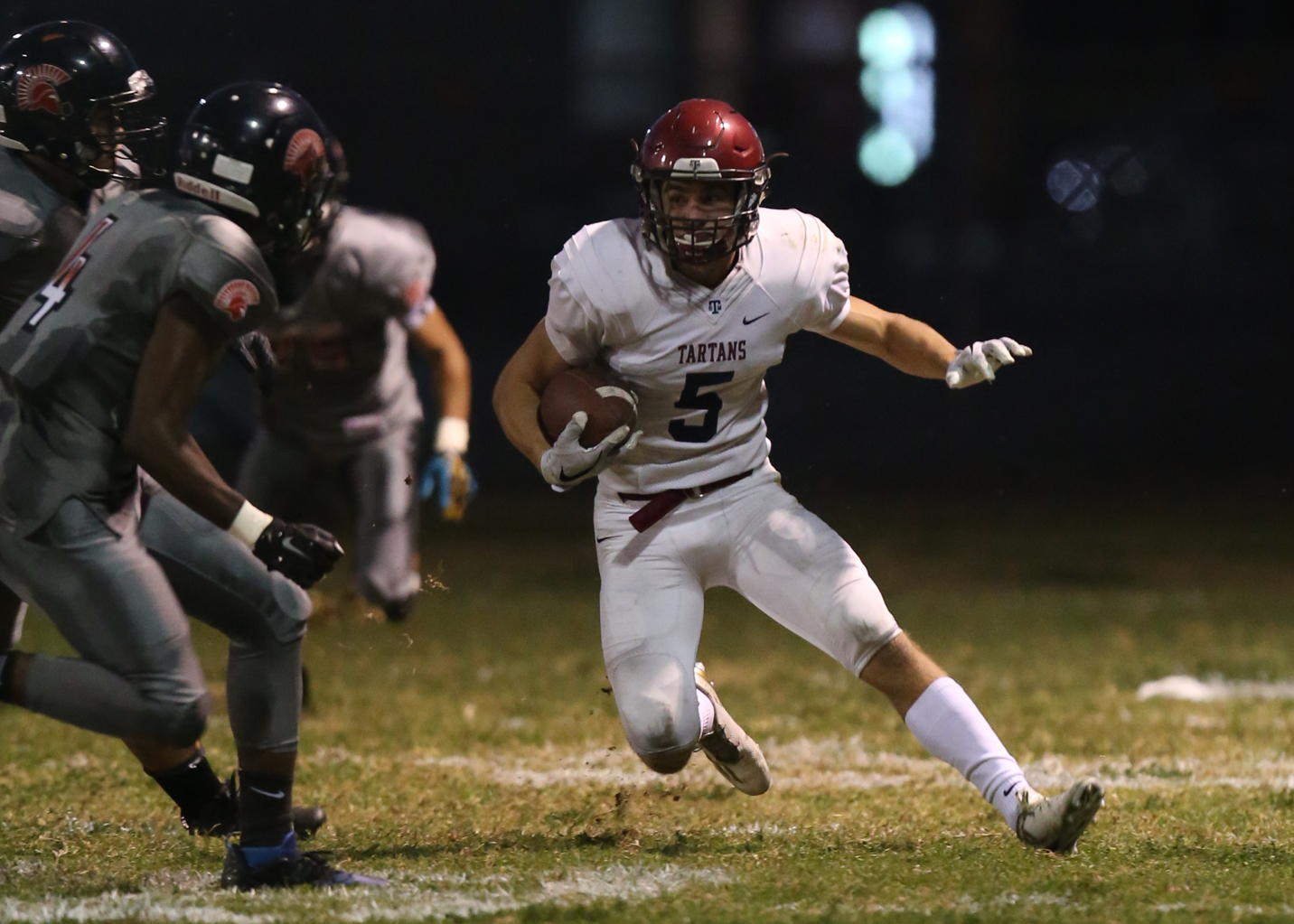 In a dominating performance on the road, Grace Brethren of Simi Valley powered its way past St. Margaret’s 35-13 on Friday night.

Grace Brethren used speed, in the form of a 164-yard performance from wideout Jermel Jones. They used power, as running backs Lontrelle Diggs and Josh Henderson bulldozed their way to a combined 215 yards. And they used precision, as freshman quarterback Michael Zele completed 10 of 15 passes for 245 yards and three touchdowns.

The Lancers (4-2) bested the Tartans (5-2) in all aspects of the game and held control from the opening whistle.

Grace Brethren was especially sharp over the first 15 minutes of the game. The Lancers marched downfield in less than three minutes and scored when Jones made a spectacular one-handed catch in the end zone for a 7-0 lead.

The lead would grow to 14-0 when Diggs scored on a nine-yard scamper six minutes later. The drive was extended by a 19-yard Henderson run on a fake punt on the Tartans’ side of the field.

St. Margaret’s quarterback James Mott’s first of two interceptions in the first half went to Troy Hothan, who returned the pick to the Lancers’ 44-yard line. A 43-yard strike from Zele to Jones set up a 15-yard touchdown pass to Anthony Parrazzo three plays later and the lead increased to 21-0.

“In eight minutes we were down 21-0. I’ve never experienced that with a Tartan team before,” St. Margaret’s coach Rob Healy said. “It was frustrating. I thought we were lackadaisical … We’ve got to learn what it takes to prepare every week. Not one week, but every week.”

The Lancers’ defense pressured Mott consistently all night, forcing him to scramble and make some poor decisions. Mott’s second interception came deep in the Grace Brethren side of the field and erased what had been St. Margaret’s best drive of the night. Jones came away with the interception.

St. Margaret’s got on the board with just under two minutes before the half when Christopher Vartanian kicked a 33-yard field goal, cutting the lead to 21-3.

St. Margaret’s seemed to have found a spark early in the third. They opened the quarter with an efficient nine-play, 78-yard scoring drive. Running back Marcus Knight ended it with a two-yard touchdown run.

But Grace Brethren kept making one big play after another. A 41-yard strike from Zele to Jones set up a 20-yard Diggs touchdown run that made it 28-10.

With a healthy lead, the Lancers continued to apply the pressure.

Zele connected with Jones for a 49-yard touchdown pass to start the fourth, putting the Lancers up 35-13 and, at the same time, slammed the door shut on a Tartans comeback.

Diggs ran for 111 yards and two scores on 17 carries. Henderson ran for 104 yards on nine touches.

Vartanian tacked on an 18-yard field goal in the third quarter to close out the scoring for the Tartans.

St. Margaret’s receiver Ryan Cragun caught a game-high 13 passes for 133 yards. He also had an interception on defense. Mott completed 19 of 32 passes for 191 yards and two interceptions.

While many leagues throughout Orange County began league play tonight, this game offered the Tartans a tune-up before hosting Nordhoff in another nonleague contest on Oct. 13.