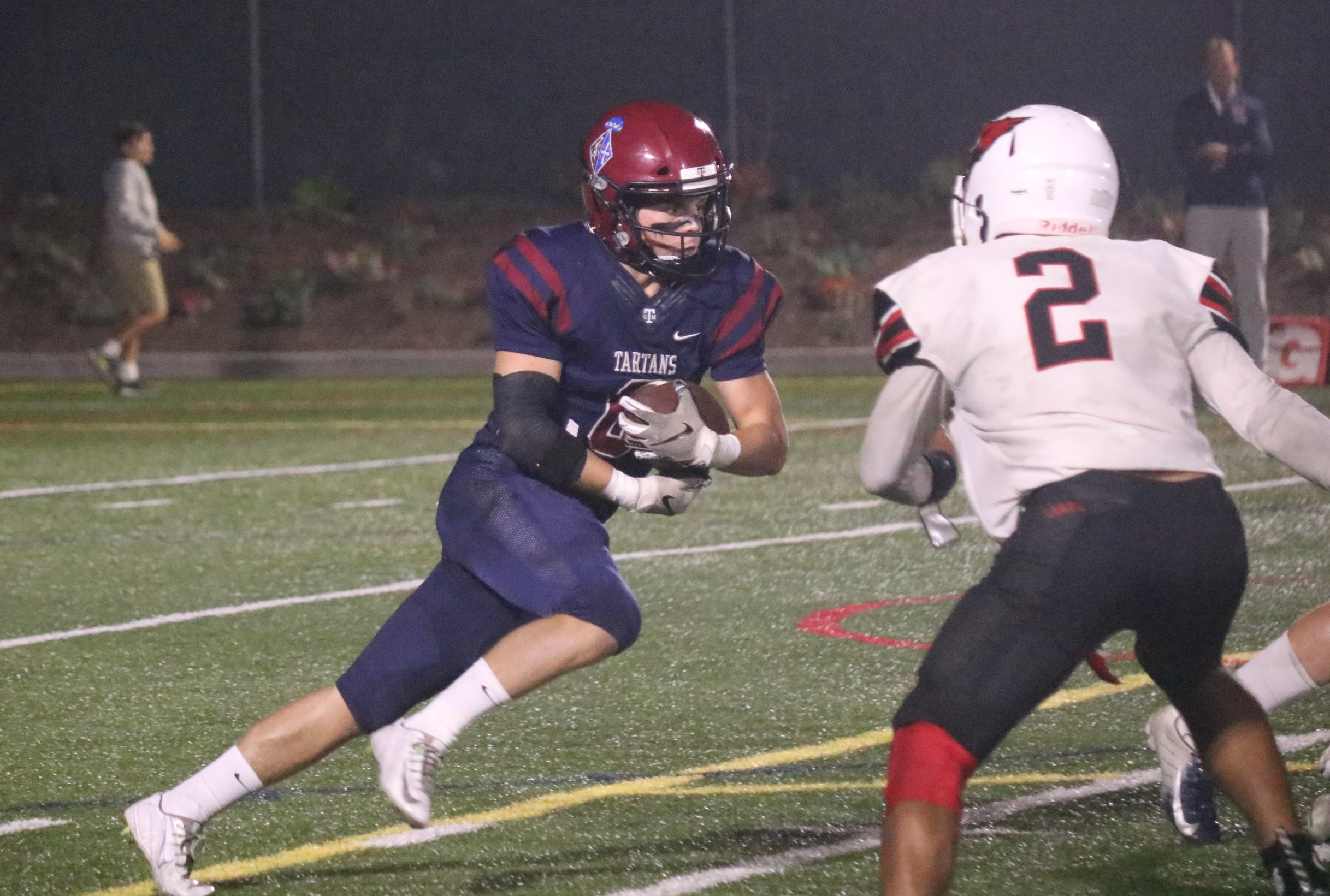 As we barrel into week six of the high school football season and the opening of league play, San Juan Capistrano has proven to be a hotbed for the sport.

Four of the five teams in town have combined for an 18-5 overall record, and the only teams from the local tri-city area that are ranked in the latest CIF-SS division polls are both from San Juan.

The Stallions (3-3) are coming off back-to-back wins after a 1-3 start, but the star for San Juan Hills has been its defensive group.

San Juan Hills shut out Great Oak, 24-0, on the road last week and took down local rival Tesoro, 7-6, in the previous week. The Stallions have two shutouts on their record and Tesoro’s six points are the only points San Juan Hills has allowed in a win this season.

San Juan Hills has 16 sacks as a team, with senior Cade Albright leading the way with six. The Stallions have five interceptions. including two each by senior Joey Hobert and junior Carson Lewis. Seniors Case Ostrom and Darius Jackson lead in total tackles with 67 and 61, respectively.

Sophomore quarterback Hudson Jones, who opened the season at No. 3 on the depth chart, has taken the offensive reigns in the last two wins.

In the Sea View League, San Juan Hills still looks to be the favorite as it opens on Friday against Trabuco Hills. Dana Hills and Laguna Hills are down, but Aliso Niguel (6-0) is undefeated. The Wolverines, averaging 39 points per game, visit San Juan Hills on Oct. 5.

The Lions have proven to be as advertised and are one of Southern California’s best heading into Trinity League play.

JSerra (5-0) has taken on tough competition and beaten them at every turn. Two highly regarded public schools, Corona del Mar and Calabasas, were turned away at home and on the road with JSerra scoring 49 points in each.

The Lions survived a test at Bishop Amat, 21-20, before beating ranked out-of-state schools Pinnacle of of Phoenix, 42-35, and Faith Lutheran of Las Vegas, 50-10.

JSerra’s stars have shined as promised on both sides of the ball.

The Lions’ offense is averaging more than 42 points per game with senior quarterback Caden Bell at the helm and junior Chris Street on the ground. Bell, a Servite transfer, has completed 55 percent of his passes, and Street, a Mater Dei transfer, has performed as expected with 624 yards and seven touchdowns on 89 carries.

On defense, the name that has jumped to the top of the stat sheet is sophomore linebacker Jaden Genova. Genova leads the Lions in total tackles (34) and solo tackles (24) and is second in sacks with 4.5.

Senior Shawn Nielsen is still the man on the JSerra defensive line. Nielsen leads with 6.5 sacks and 21 tackles. Seniors Calvin Mouisset and Victor Clanton have also been defensive leaders.

Next up is arguably the toughest football league in the country in the Trinity League, and JSerra, ranked No. 6 in CIF-SS Division 1, opens with national No. 2 St. John Bosco on Friday. Bosco scores nearly 54 points per game and is allowing nine points per game. JSerra hosts national No. 1 and reigning national champion Mater Dei on Oct. 19.

The Tartans still have one game left before hitting league play, but St. Margaret’s is hitting its stride.

The Tartans (5-1) have scored 40 or more points in their last three games as they continue to punch up against their competition. St. Margaret’s, No. 3 in Division 6 and the only team in that poll with fewer than 2,000 enrolled students at 476, pulled away against a bigger Division 4 in Bishop Diego of Santa Barbara last week, 42-15, and nearly upset Division 4 No. 5 Grace Brethren in their lone loss, 13-12.

St. Margaret’s has a balanced offense with senior quarterback James Mott leading the way with a 56 percent passing rate for 1,077 yards and 12 touchdowns. Mott has spread the ball around to his receivers with five receivers each putting up 150 yards receiving and two touchdowns.

Senior Koa Todd continues to be the defensive linchpin for the Tartans with a team-high 42 tackles. Senior Nick Falshaw leads with five sacks, and senior Alex Smith leads with three interceptions.

St. Margaret’s plays at Santa Fe Christian of Solana Beach on Friday before starting San Joaquin League play next week. The Tartans look to be runaway favorites in their new league. The league’s other three teams are all members of Division 12 or 13 and have a combined 6-10 record.

The Eagles have been a surprise success in 2018.

The Eagles sparked their season with an overtime win over St. Monica of Santa Monica, 19-13, and have scored 41 points or more in their next four wins. CVC also boasts a shutout over Sherman Indian of Riverside, 41-0, on Sept. 14.

Junior Tyler Henry has excelled at quarterback, and seniors Seth Yu and Jack Roberts have formed a formidable two-headed rushing attack. Roberts has also doubled as the defensive leader for the Eagles.

CVC opens play as a potential favorite in the reformed Academy League against Firebaugh of Lynwood on Friday at San Clemente High. The other four league teams post a combined record of 5-15.

The Warriors have had a rougher go of it with a tough schedule loaded with local public schools, but SVC enters the San Joaquin League with a little momentum.

SVC (2-5, 1-0) picked up its first win on the road against Duarte, 26-0, on Friday, Sept. 21. Senior quarterback Jack Sweeney completed 12 of 16 passes for 168 yards and a touchdown and ran for three more touchdowns in the victory.

SVC opened league play on the road against Webb at Damien on Thursday, and the Warriors picked up back-to-back wins by a score of 26-21.

The Warriors host the California Military Institute in a nonleague game on Oct. 12 before hosting Southlands Christian in league on Oct. 20.