Moments in Time: Learn About the Acjachemen Nation in Summer Lecture Series

Having just celebrated the founding of the United States of America on July 4th, we realize that for our community, the 242 years of country recognition is an extremely short span of culture.  Even 2,000 years of Christianity seems like a small period when compared to Judaism at over 5,000 years. Cultures do not just start, stop and start up again. Cultures evolve over many, many years. Although the federal government has repeatedly denied recognition to the Acjachemen nation, the Native Americans in our community have been around for nearly 10,000 years.

The Acjachemen Nation did not have a written language. Their history was passed down from one generation to another in oral tradition. It was not until Father Jeronimo Boscana wrote his 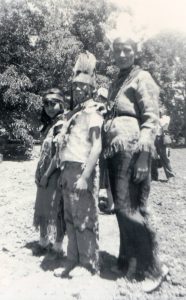 treatise on the Indians of the San Juan Capistrano Mission entitled, “Chinigchinich” in the early 1820s while a priest at the Mission, that any written record was made. Alfred Robinson translated the Boscana manuscript in his book Life in California in 1846. In the early 1930s, John P. Harrington was authorized by the United States government to study California Indians.  Harrington discovered the original Boscana manuscript and was able to correct many of the errors and omissions from the Robinson translation.

In December 1993, the state of California corrected a 140-year-old mistake by officially recognizing the Juaneño Band of Mission Indians as the original native tribe of Orange County.  In 1850, when all the tribes in California were listed, Juaneños were left off the list. Today, the Harrington translation of Boacana is available, as is the continued oral tradition of the stories passed down through generations. Excavation in San Juan Capistrano has also yielded relics and artifacts that date back to the early Acjachemen nation.

The Acjachemen were a peaceful people who believed in one God, and one tribal leader who advised his people but did not make laws. Villages were small but self-sufficient. Respect for the elders was a key to the culture. Older women in the village raised the children and retold the stories of tribal history.

This summer, the Historical Society is hosting three talks by Stephen O’Neil on the history of the Acjachemen Nation. With over 35 years of experience as a cultural anthropologist in California, O’Neil has worked with the Acjachemen tribal community since 1978. He has researched and written on ethnography, archaeology and history, concentrating on the ethnohistory of Southern California tribal peoples.

The lectures, which are free to the public, will be held on Sunday, July 15, Aug. 5 and Aug. 26 at 3 p.m. on the grounds of the Historical Society, located at 31831 Los Rios St. Bring a lawn chair. On July 15, Ted Rosenfeldt will serve some of his award-winning barbecue. Cost for the barbecue is $8. Donations to the Society for Historical Preservation are welcome. Spend a Moment In Time learning about the people who were here long before the Spanish came and are still here today.