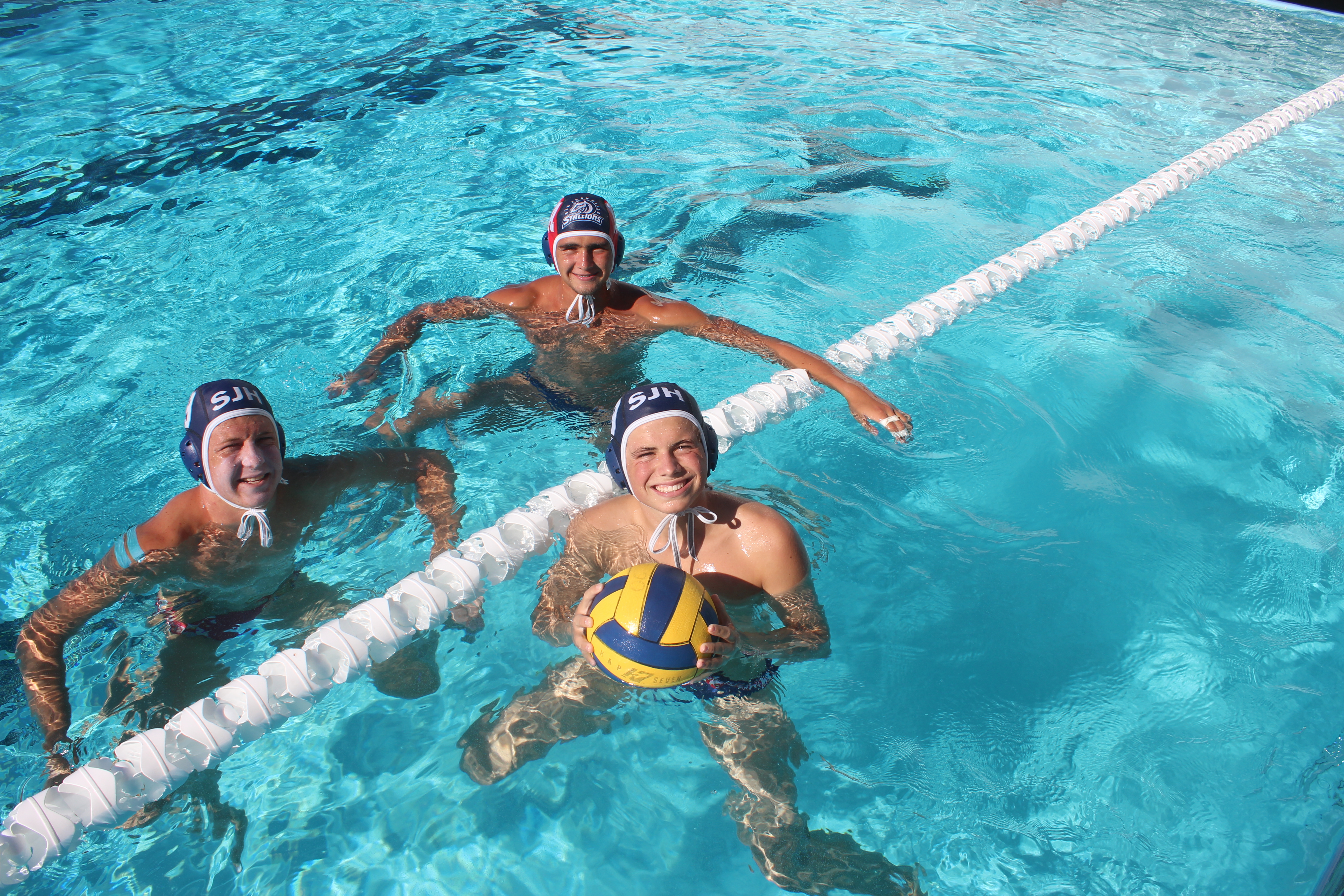 By Steve Breazeale and Victor Carno

The 2016 fall high school sports season has begun, and several San Juan Capistrano-based teams are primed for big seasons. In our annual preview, we get you caught up to-date on programs from all five schools in town.

For in-game updates, scores, news and more for all of the teams, follow us on Twitter @SouthOCsports.

Now that head coach Ivan Buich has had a full calendar year to work with the San Juan Hills boys water polo team, the second-year coach is beginning to see signs of progress. The program has had difficulty finding wins in the pool in recent years, but Buich has instilled a disciplined, year-round approach to the sport that his team is embracing.

The Stallions doubled their win total from the previous year in 2015, raising the number from two to four wins. The Stallions went winless in the Sea View League again, which it has done every year since joining the league, but Buich described how the games were much closer than in previous years. Rather than lose by double-digit points like they did in 2014, the Stallions hung close in several contests. Three of the Stallions Sea View League losses last year were decided by five or fewer goals.

With a large group of players returning in 2016, Buich believes the team is poised for more incremental improvements this season.

Freshman two-meter center Max Miller has impressed Buich this offseason and has the potential to contribute right away. Miller provides the team with a 6-foot-2-inch, 170-pound presence down low.

“Everyone has gotten better and contributing a lot more than they did one year ago,” Buich said. “The practice time is there, the comraderie is there, and everything is aligning.

The Sea View League was realigned this offseason, and now includes new members Mission Viejo and Tesoro. Buich believes the league is now more competitive than ever. –Steve Breazeale

After enjoying so much success in the Sea View League the previous two seasons, the San Juan Hills girls tennis team has been moved up to join the highly competitive South Coast League in 2016. The Stallions were crowned back-to-back league champions in 2014 and 2015, and will enter a new league filled with perennial playoff contenders and a new head coach.

The team does return its top doubles team in juniors Reese Thomas and Kelley Green. The singles team got a boost by adding standout freshman Milana Molnar, a highly-ranked youth tournament player.

Because they were such a senior-heavy team last season, the Stallions played in a lot of matches to better prepare themselves for the playoffs. This year, Taylor decided to tone the number of games on the schedule back a bit, so the team can focus on their own games and doubles partners can learn to play alongside each other.

Taylor has also been telling the young team to embrace the challenge of a new league, but to not let it distract them. After winning back-to-back league titles, the Stallions’ new league opponents will want to see what they’re made of.

“We’re talking about how to rebuild and just keep it calm and not overreact. People are watching us and want to see how we do,” Taylor said. “You’ve got to want it, and it won’t be until we play in our first game where we realize it’s getting serious. They just have to see it for themselves and they’re ready for it.”—SB

It would be hard for any program to top a league title and a semifinals appearance in the CIF-SS playoffs after graduating a majority of its starting lineup. But St. Margaret’s girls volleyball coach Joaquin Acosta believes his young team has the chance to reach those same lofty heights for a second consecutive year in 2016.

The Tartans return a solid core of players in outside hitters Gracyn Bank and Kaitlyn Kao, and returning starter Erica Mendel and setter Annie Eales. They were all members of the dominant Tartans team that went a combined 22-6 last season, including a 12-1 record in Academy League play.

A strong group of freshmen and sophomores have helped replenish the skill on the roster in the offseason. Outside hitter Grace Colburn and middle blockers Emmy Flornes and Tatum Westendorf are all freshmen that have earned spots in the starting lineup.

“Our experience is not high, but they’re high-level kids,” Acosta said. “They play high-level club and they don’t play like freshmen. … If (the team) develops, we have the ability to possibly play at the same level (as last year) and maybe even beyond”

The Tartans did well competing against larger programs at the Foothill Queen of the Court Tournament in August, compiling a 4-3 overall record. Acosta said the team’s effort at the tournament was excellent, considering they hadn’t had many summer practices leading up to it.

The Academy League is usually competitive, and this year is no different. The Tartans will battle Sage Hill and Crean Lutheran for the title. –SB

The St. Margaret’s boys and girls cross country squads advanced to the CIF-SS finals last year, and are gearing up for another successful season.

The girls team lost its top runner from last season in Katherine Adelman, but return a handful of strong runners. Leading the Tartans will be junior Daisy Sellas and sophomore Julia Martain. Martain finished second in the sophomore race of the Cool Breeze Invitational in Pasadena on Sept. 3.

Freshmen Cami Cassinelli and Audrey Larson, who are also standout soccer players, have added much-needed depth to the Tartans roster.

The boys team returns nearly every runner from a team that qualified for the CIF-SS Championships last season. This year the squad has three seniors to lead the team, a group that includes twin brothers Nic and Luke Gitter and Charlie Smith. Having some seniors on the squad this year will provide the leadership that is needed to return to the postseason and place well in league, Bendzick said.

“The front trio of Nic, Luke and Charlie should help put the three runners in the top-5 of the Academy league,” Bendzick said.

Aside from these upperclassmen, standout sophomore Matthew Colglazier has proven to be one of the better 800-meter runners in the Academy League. Bendzick believes he has the ability to parlay a successful track and field season into a solid cross country venture this fall.—Victor Carno

Three weeks into the season, the JSerra girls volleyball team has been racking up match wins and placing in tournaments at a high clip. The Lions already have a 10-6 overall record and placed second at the Foothill Queen of the Court Tournament’s varsity division on Aug. 21.

The high finish at the Queen of the Court was engineered by several returning starters and a few newcomers.

The Lions return junior setter and team captain Kate Gonzalez, who is responsible for setting the Lions 5-1 formation that requires her to be on the court at all times. The team also returns junior outside hitter and captain Caroline Kennedy, senior middle blocker Bianca Hawlish and senior libero Alexis Cuff.

The Lions have good size at the middle blocker position, and are relying on freshman Kylie Pries and Hawlish’s abilities at the net. Outside hitter Shayne Francisco, a sophomore transfer from Dana Hills, is also contributing early in the season.

“I wasn’t sure what to expect (at Queen of the Court). We only have four seniors, and it’s a young team,” coach Mike Murphy said. “I think that our showing and our result there was pretty impressive.”

Since the tournament, the Lions picked up wins over Capistrano Valley and Saddleback Valley Christian, the defending CIF-SS Division 3A champion.

The Lions’ busy schedule continues this week with an appearance at the Dave Mohs Tournament at Edison High School. –SB

The Capistrano Valley Christian girls volleyball team is off to one of its best starts to a season in recent years. As of Sept. 8, the Eagles, who return all but one starter from last season, are 8-1 overall. The team is already one win away from matching last year’s win total.

A main reason for the hot start is the Eagles’ team chemistry. A large portion of the team is made up of returning juniors, who have played alongside each other since middle school. The junior class, which features Jessica Wilson, Riley Barclay, Maddy Maulden, Kahley Jaeke and Riley Dungan, all broke onto varsity as freshmen, and have built a strong bond. Senior co-captain and middle blocker Jess Castillo is also a veteran presence in the lineup.

The Eagles picked up six straight wins to start the season, highlighted by a second-place effort at the Cal Lutheran Tournament last week, where they went 4-1 overall.

The mix of players has given head coach Kelle Bond plenty of rotation options to choose from.

“It’s awesome that this group of juniors has stayed together and we have this additional group joining them. I have not seen that in my five years coaching here,” Bond said. “It has really made our team unite and has allowed for a high level of competitive play.”

The team’s strength lies in its ability to serve-receive and ignite playmakers from both the front and back rows. Setter Riley Barclay has had a strong showing early, according to Bond, and has been setting up playmakers like Wilson and Castillo.

The Eagles went 2-8 in the Express Gold League last season, and are primed to better that position after the hot start.—SB

The pressure is the highest it has ever been for returning three-time defending CIF-SS Division 3A champion Saddleback Valley Christian girls volleyball team. The Warriors, who also advanced to the second round of the CIF State Division III tournament in 2015, are eyeing a rare fourth consecutive title this season, a feat that has not been accomplished in CIF-SS history.

SVC head coach Carmen Stratton has only four seniors returning to the lineup, but still has a positive outlook on how they stack up this year.

“Only two of our seniors are starters, but we have very talented young team this year,” Stratton said. “Despite the loss of some seniors, I think we are incredible for our (school) size.”

The Warriors road to a fourth CIF-SS title might be trickier this time around. Because of their recent success, SVC was promoted up from Division 4 to Division 3 in the CIF-SS.

Returning seniors Sklyer Stratton, Lily Dyer and Celine Hoyle will anchor the Warriors rotation, and are providing veteran leadership in the early going, Stratton said. SVC opened its season with a 3-0 loss to JSerra on Aug. 25, but bounced back with consecutive wins over University and St. Margaret’s on Aug. 30 and Sept. 1, respectively. –VC