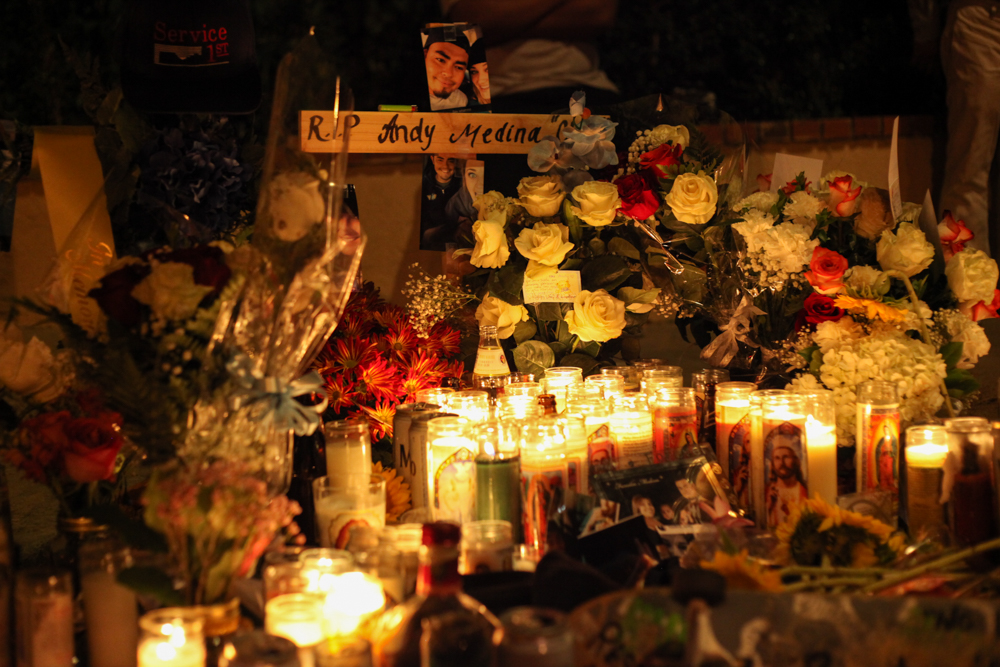 Cesar Andres Medina, known as Andy by friends and family, was crossing Del Obispo Street on his skateboard last Friday night when he was fatally hit by a truck. Witnesses told authorities that the faded black pick-up truck continued southeast on Del Obispo following the crash.

The hit-and-run collision occurred around 10:10 p.m. on Oct. 2 at the cross street of Paseo Carolina, according to Orange County Sheriff’s Department officials. Medina, a 23-year-old who was born and raised in San Juan Capistrano, was treated at the scene before being transported by paramedics to Mission Hospital in Mission Viejo. Medina was pronounced dead at 10:45 p.m. as a result of his injuries, according to authorities.

On Saturday, Oct. 3, Medina’s family and friends gathered at a memorial created at the corner of Del Obispo Street and Paseo Carolina. Toward the midnight hour, several friends remained at the site of the crash, including Lilia Gutierrez, a former classmate.

“It’s still not hitting me. It’s still so unreal,” Gutierrez said, her face illuminated by dozens of candles lining the sidewalk. “There are no words to describe this.”

One friend mentioned that Medina’s sister, Jenifer, had been working at Mission Hospital the night Medina came in.

Jenifer created an online fundraiser to help their family following her brother’s death, and in the fundraiser’s description, she wrote about the day she “feared the most.” She was working at Mission Hospital when Medina was taken in, and she recognized his wallet when it was brought to her. She saw her brother’s face on the ID.

“My whole world collapsed as I did,” Jenifer wrote. “The nurses I call my friends all came and held me as I cried on the hospital floor. They got me to a bed and I asked, ‘Is he gone?’ ‘Yes, he’s gone.’”

“Andy had so many goals for his future and was taken from all of us too soon,” Jenifer wrote. “I just want all the people he loved and loved him to get a chance to say their last good byes to him.”

Abel Lopez, 22, of San Juan Capistrano, said he and Medina had been close friends for more than 15 years, attending San Juan Elementary School, Marco Forster Middle School and San Juan Hills High School together. He described Medina as “always happy” and said he was often the center of attention.

“He was himself, not a follower,” Lopez recalled. “He tried to live life to the fullest.”

Lopez said about 60 people contributed to Medina’s memorial on Saturday, leaving candles, photos and other mementos including a skateboard with messages etched on it such as “No Limit” and “See you in the flipside.” Lopez said Medina could “always” be seen on his skateboard.

“He was a real friend, a good friend,” Lopez said. “You can say you have a lot of friends, but you know which ones are real and which ones are not. He was one of the real ones.”

Lopez said Medina was a “great person” who many people knew and cared for. For Lopez, he was the brother he never had.

“We were the best of friends. He was like my brother,” Lopez said as he sat across from Medina’s memorial. “That’s the reason I’ve been here all night. That’s the least I can do.”

On Saturday night, while friends and family mourned Medina’s death in San Juan, Orange County Sheriff’s Department traffic investigators obtained information that led them to the Laguna Niguel residence of 19-year-old Andrew Christopher Michaels. Upon arrival, deputies located a Dodge Ram truck, the vehicle believed to have struck Medina, parked in the driveway.

A short time later, Michaels contacted deputies at the station and, following an interview with investigators, he was arrested at approximately 9:30 p.m. His truck was towed and is being processed for additional evidence in the ongoing investigation.

Michaels was booked into Orange County Jail on $100,000 bail—later increased to $500,000—for felony hit and run. He was scheduled to be arraigned at 2:45 p.m. in Department CJ-1, Central Jail, in Santa Ana on Tuesday, Oct. 6. Deputy District Attorney Stephen Cornwell of the Homicide Unit is prosecuting the case.

Michaels is accused of hitting Medina with his truck as he was crossing Del Obispo Street around 10:10 p.m. Friday night and dragging his body with the truck for approximately 100 feet, according to the district attorney’s office. In addition, Michaels is accused of driving “away from the scene without stopping the vehicle to render aid or assistance” to Medina.

If convicted, Michaels faces a maximum sentence of four years in state prison.

OCSD Lt. Jeff Hallock said Monday that authorities have received conflicting statements from independent witnesses as to whether Medina skated across Del Obispo on a green light with a pedestrian walk sign. Hallock said more information will be available following a decision by the district attorney Tuesday.

The investigation in this case is ongoing. Anyone with additional information is encouraged to call OCSD’s Traffic Bureau Sergeant Ray Wert at 949.425.1860.

An online fundraiser to help Medina’s family can be found at www.gofundme.com/8y5jxdbw under the name “Cesar Andres Medina.”

A fundraiser is scheduled to take place Tuesday, Oct. 6, at El Adobe de Capistrano from 6 p.m. to close. For every $2 soft taco ordered, $1 will be donated to Medina’s family. El Adobe is located at 31891 Camino Capistrano in San Juan Capistrano.