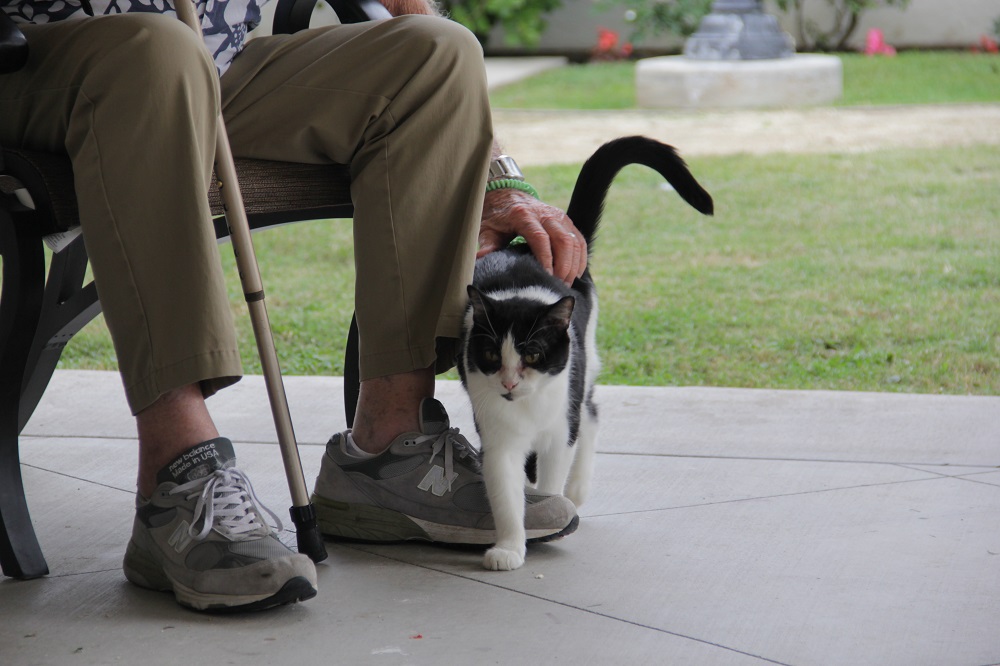 Two pairs of previously homeless cats have recently found a new home as therapy pets for the memory-impaired at an assisted living facility.

The Silverado San Juan Capistrano Memory Care Community back in November adopted the four cats – Arthur, Thomas, Mame and Gato – to add to its collection of other pets that include dogs, rabbits, tortoises and more cats.

As part of the Silverado center’s therapeutic treatment plan to provide a home-like environment, the animals interact with residents who are experiencing dementia and have memory-loss diseases such as Alzheimer’s, said Doreen Cregg, senior family ambassador at Silverado.

“For people with cognitive impairment, sometimes communication can be challenging, and to be able to sit with an animal that expects nothing of you is nice,” Cregg said.

Cregg picked out the four cats from Catmosphere Laguna, a cat café and lounge in Laguna Beach that fosters cats and kittens for adoption.

Mame and Gato, formerly Natto, are a mother-and-son pair that were orphaned in an empty apartment after their owner died, according to Catmosphere. Arthur and Thomas, formerly Tostito, are another bonded pair who have become close companions. When the two were rescued, Arthur, the eldest of the two, was very protective of Thomas, acting as his guardian.

After only being at Silverado for a few weeks, the cats adjusted to their new home, taking full advantage of the 40,000-square-foot facility and becoming fast friends with the residents and staff.

“The environment here is indoor-outdoor … this is one of the few environments where a cat can roam and experience life and be safe,” Cregg said, later adding that Thomas, in particular, “loves to jump on the (maintenance) cart and go for a ride. So, he’s been a fun kitty.”

Mary Janney, an 81-year-old resident at Silverado, said she loves the new cats, noting that one of them frequents her and her roommate’s quarters and jumps on their armoire.

When she and her family were looking for an assisted living center, Janney said she was drawn to Silverado because of its practice of utilizing animals as a therapeutic treatment.

“Well, I love animals … pets are a very important part of people’s lives. In fact, to some people, pets are the only family they have,” she said.

In addition to adopting pets for the center, Cregg said Silverado also allows incoming residents to bring their own personal pets to reside with them.

“We don’t want residents to lose their pet,” Cregg said. “When you have a disease, you’re losing so much of your life and of yourself. To lose the pet you love is really unfair.”

For several months, Cregg said, she had been looking to adopt golden retrievers for the center and applied to many rescues, but every one of them turned her down.

“A lot of rescues don’t want to adopt to senior communities. They only want them to go to private homes,” Cregg noted. “But, quite honestly, a pet living in this environment, they’re never alone. They have attention 24 hours a day.”

While shopping in Laguna Beach, Cregg and her husband stumbled upon Catmosphere.

“I was talking to one of the volunteers there, and she mentioned that they had this pair (Arthur and Thomas), so of course I was very intrigued by these two and was interested in adopting,” Cregg said.

The Catmosphere volunteer had also recommended Mame and Gato, believing they, too, would be a good fit for Silverado.

“We decided that we would just take all four,” Cregg said. “It worked out really well.”

Catmosphere Owner Gail Allyn Landau further explained that bonded pairs should be adopted together for the benefit of both the pets and the parents.

“If the cats are bonded, they are better kitties when they’re adopted out together because they would otherwise miss each other terribly and it wouldn’t go well for the adopted parents or family,” Landau said.

At Catmophere – a nonprofit-and-business hybrid – patrons can visit the café for snacks and drinks or they can pay to spend an hour or two relaxing in the lounge with the cats. The lounge is a tranquil environment with soothing music, comfy benches for customers and, of course, plenty of scratch pads and cat furniture for the felines.

“Because the lounge is a tranquil place, very quiet with meditative music playing, they get used to a certain calm, and that is why someplace like Silverado is excellent for them,” Landau said.