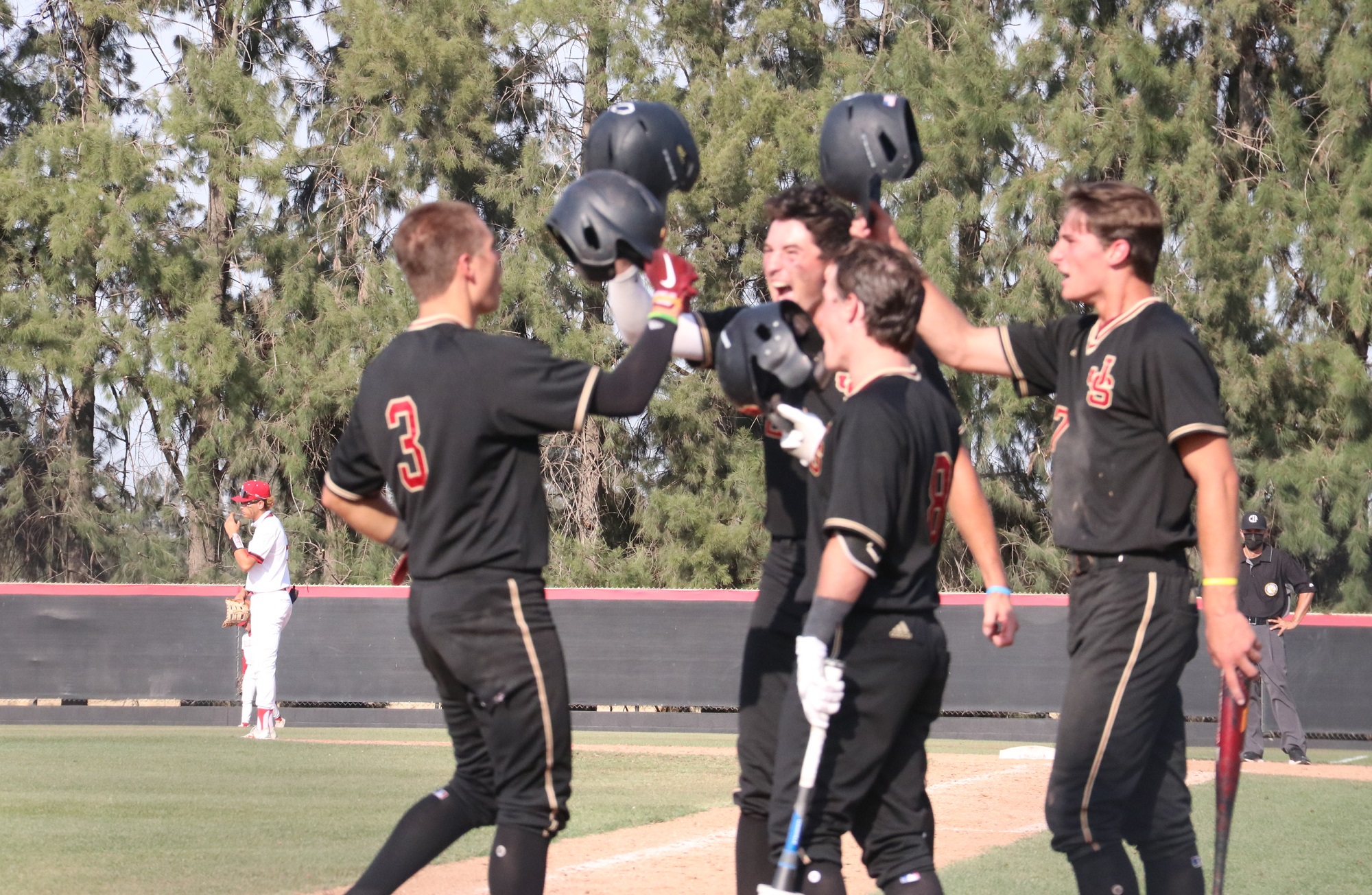 The Lions had lost in their two previous and semifinals in 2014 and 2016, and after opening strong in its half the first frame, JSerra’s third attempt wasn’t looking to be any easier on Tuesday, June 15, with Ayala posting four runs against JSerra ace Gage Jump in the first inning.

However, the Lions persevered and finally punched their ticket.

JSerra tied the game on a two-run home run by Luke Jewett in the third inning, went ahead on an Owen Fuller double in the sixth inning and exploded for six runs with two home runs in the seventh to down Ayala of Chino Hills, 11-7, and advance to the program’s first CIF-SS title game.

“When our horses run wild, and they do special things like that, you’ve just got to stay the hell out of the way,” Kay said. “That’s what I felt like we did today. They ran wild, picked each other up, had big at-bats in big moments, and now they get to do it against another really good team.”

Top-seeded JSerra (27-6) will now face off against No. 2 seed Harvard-Westlake (28-4) in the CIF-SS Division 1 championship game. The game will likely be Saturday night at Cal State Fullerton, but CIF-SS will make the official announcements of game locations and start times tomorrow, Wednesday, June 16.

Harvard-Westlake beat JSerra’s Trinity League rival Orange Lutheran in the semifinals, 3-2, and beat the Lions in both their meetings this season. JSerra lost at Harvard-Westlake, 2-1, on March 23 and at JSerra, 6-4, on April 7.

“I get to play one of my best friends in (head coach) Jared Halpert at Harvard-Westlake,” Kay said. “He’s a guy that we bounce ideas off each other. I think he’s the best coach in Southern California… It’s going to be a really good test for us. I told our team, just keep making history.”

JSerra came out strong in the first inning with a two-out rally to load the bases. David Horn put the Lions on the board with a two-run double, and what looked to be incredible footing with UCLA signee and likely high MLB Draft pick Jump coming to the mound.

“Gage was Gage for four innings,” Kay said. “It just wasn’t he first inning, and we haven’t seen that out of him in years. I don’t know if they had pitches or whatever it was, they can swing the bat.”

Ayala’s first five batters reached base, and the Bulldogs scored four runs with a RBI single, a bases-loaded double that scored two runs and a bases-loaded balk. Jump had only allowed one earned run all season, and there were four on the board for Ayala after one inning.

Jump then got three strikeouts to end the frame.

“I was really proud of him and his demeanor after that,” Kay said. “There was some questions about, ‘do they have me? I feel good. My stuff feels good.’ He said ‘send me back out there.’”

Jump regained his form and pitched five full innings with only those four runs allowed on seven hits with seven strikeouts and two walks. Jump got so back into his groove that Ayala called for the umpires to check the senior lefty’s hat for any substances in the fourth inning. None were found.

“Yucaipa did it. Capo Valley did it. Orange Lutheran did it,” Kay said. “It’s kind of getting tiring, but I’m not going to lie. Gage is Gage, and if you’re going to try and ruffle his feathers a little bit, he’s going to get better and better, and that’s what he did the last four innings.”

With their ace back on track, JSerra worked its way back into the game.

Jump led off the third with a walk, and he scored when Luke Jewett smacked a two-run home run to left field to tie the game, 4-4.

In the sixth, Connor Saccullo hit a double high off the wall to lead off the inning, and two batters later, Fuller laced a double to score Saccullo and put JSerra ahead, 5-4.

The Lions didn’t know how much they’d need it at the time, but JSerra piled on the insurance runs in the seventh inning with the long ball.

Gabe D’Arcy led off the inning with a double and, after a Jewett single, scored on a double by Horn. With one out, Colin Blanchard smoked a three-run home run to right field for the necessary 9-4 lead.

Anthony Aleman got on base after the home run, and Cody Schrier clobbered a two-run home run to deep center field for an 11-4 lead as JSerra closed in on its first championship appearance.

Ayala did not go quietly as the first three batters of the bottom of the seventh reached base, and all three would eventually score to cut the lead, 11-7.

Kay went with the big guns as he called the likely championship game starter Eric Silva out of the bullpen to replace Tristan LaMaison, and while Silva allowed that final Ayala run to score, the UCLA signee got the last outs to send JSerra to the CIF-SS title game.

JSerra’s ride in this game was not unlike the ride the Lions have been on this season.

JSerra opened the year just 4-5, despite a large amount of fanfare due to the large amount of college signees and potential MLB Draft picks on its roster. However, Kay and the Lions settled in to go on what is now a 23-1 run to a Trinity League championship and the program’s first CIF-SS championship appearance.

The Lions have faced it all and are ready to make history one more time.