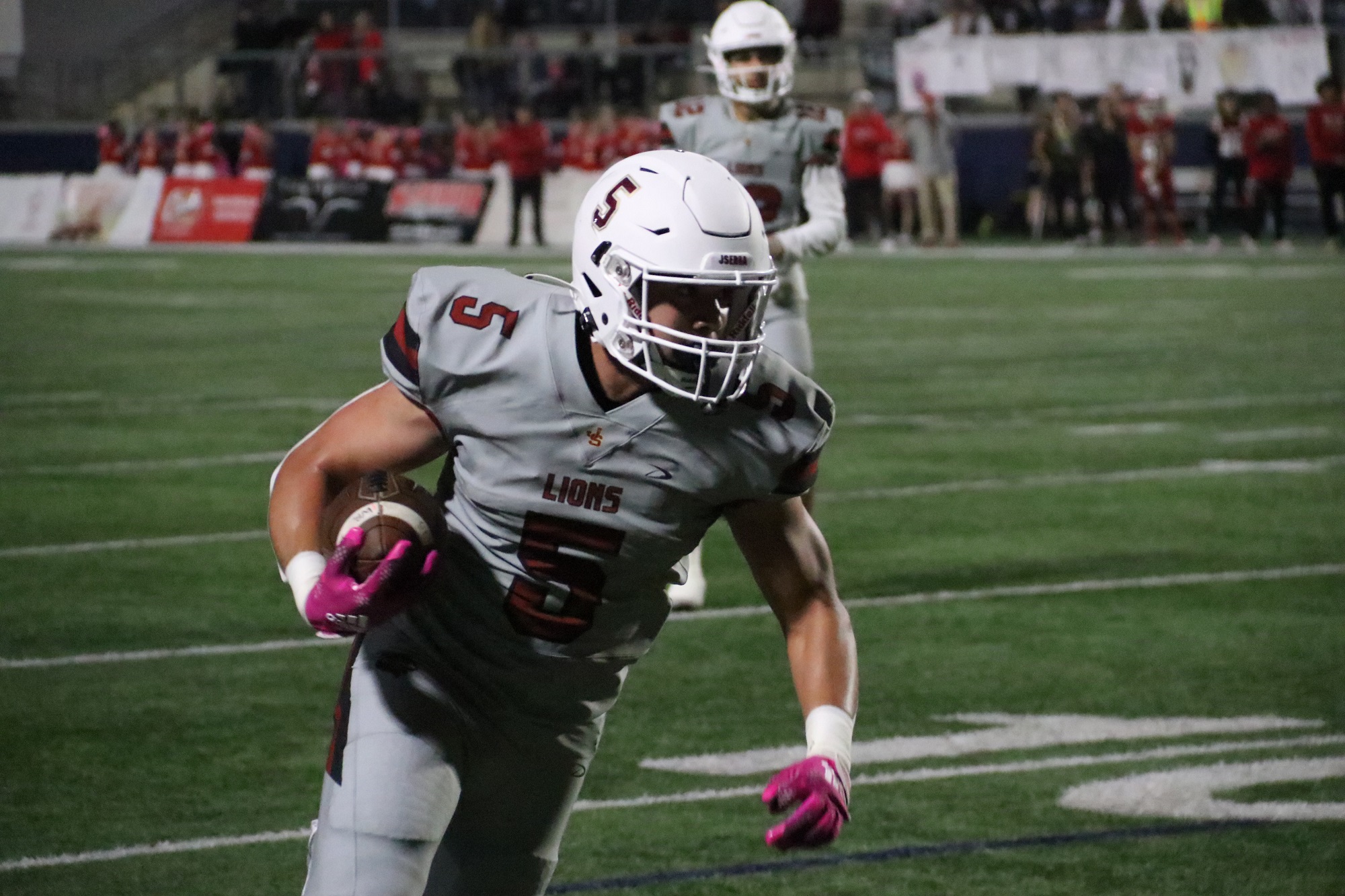 After head coach Scott McKnight took a hard hit on the field during warmups and was taken to the hospital Friday night, Nov. 4, getting revenge on Santa Margarita was likely the last thing on the minds of JSerra players.

However, the Lions achieved just that, erasing a 15-point halftime deficit and holding off the Eagles at the goal line to secure a 27-20 victory to open its CIF-SS Division 1 playoff run at Saddleback College.

Before Santa Margarita’s final drive that reached the Lions’ 4-yard line, the JSerra defense allowed only 25 yards on 13 second-half plays.

JSerra (6-5) will face Trinity League champion and national No. 1 Mater Dei (10-0) in the Division 1 quarterfinals. The Monarchs have already been tested by the Lions in a 20-14 regular-season matchup at JSerra. Mater Dei had a first-round bye and will host the Lions at the Santa Ana Bowl next Friday, Nov. 11.

JSerra offensive line coach Pat Harlow, who was the head coach of the Lions for four seasons from 2017 to 2020, was the acting head coach on Friday night. McKnight was reportedly responsive and speaking at Mission Hospital, according to the Orange County Register.

The game truly was a tale of two halves, as JSerra trailed 20-5 at halftime.

“I thought they reacted really well for the circumstances,” Harlow said. “Obviously, it took us a little while to get over that emotional letdown, but they really responded well in the second half.”

In the second half, JSerra gained 208 yards on offense and earned 12 first downs to Santa Margarita’s four, with a 27-yard scoop-and-score from Clarence Chaney to grab the lead in the fourth quarter.

Chaney’s touchdown put the Lions in front for the first time all game, and it was all JSerra needed with around eight minutes remaining in the game to hold on for the win.

The defensive turnaround came from coaches telling their players to trust their eyes, Harlow said, as well as communicating in the secondary and not letting receivers get behind them.

“We’ve been playing great defense all year,” said Harlow. “Coach (Walcott’s done) a phenomenal job, the kids have really bought into what he’s doing, and they came out and played like we can play.”

Coming out of the break, Zander Singh found Joshua Jornadal for a 29-yard pass and Kamar Gabourel on a 32-yard screen pass.

This time, after needing a fourth down conversion, the Lions finally converted a red zone trip into six points with running back George Perez’s four-yard plunge to cut the deficit to nine points, 20-11.

More precision passing from Singh got the Lions down the field on their next drive, and the quarterback topped it off with a beautiful 11-yard seam ball to Jose Frutos for JSerra’s second consecutive touchdown. A two-point conversion cut the Eagles’ lead to 20-19 late in the third quarter.

Singh credited his offensive teammates for the increased efficiency in the final two quarters.

“At halftime, we fixed the little mistakes,” the junior signal-caller said. “…We were driving (in the first half), we just weren’t able to finish inside the red zone.”

Harlow added that their success came down to all players doing their jobs.

The fumble return for a touchdown came on a play representative of most of the Lions’ second-half defensive effort. Defenders converged on a short pass and attacked the ball, ripping it away from Niko Lopez, and Chaney was the lucky Lion to hit Santa Margarita with a gut punch score.

Another two-point conversion, with Brett DeBergh hauling a pass in the back of the end zone, gave JSerra a seven-point cushion, 27-20.

Santa Margarita QB Jaxon Potter, who completed 23 of 37 passes for 333 yards and three scores, reemerged on the Eagles’ last drive.

With 2:18 remaining, Potter hit Emmett Mosley for 25 yards, and found Mosley again for 15 yards on fourth down to keep their hopes alive. After lofting a ball to younger brother Trent Mosley for another 20 yards, Santa Margarita had 20 seconds left to move eight yards and tie the game.

The Lions smothered the Eagles offense following a four-yard play, forcing three straight incompletions that left both sides hollering for much different reasons with JSerra completing the upset, and Santa Margarita headed home.

Singh had an efficient first half, throwing for 128 yards on 11-of-15 passing, but JSerra couldn’t keep drives going due to a nonexistent run game.

Potter was pressured in the end zone during the Eagles’ second possession and threw the ball away only to earn himself an intentional grounding penalty and a safety for the Lions.

JSerra reached the red zone on the ensuing drive, and Shayne Daly made a field goal, ending the Lions’ first-half scoring.

Eagles receiver Niko Lopez caught a jump ball down the seam and executed an out route to perfection to notch receiving scores of 23 and 5 yards, respectively, as part of a five-reception, 75-yard performance in the first 24 minutes.

Emmett Mosley led all receivers with 108 yards on nine catches. Santa Margarita running back Jake Foye and Perez both rushed for 38 yards, although the former did so on five carries and the latter had 18.