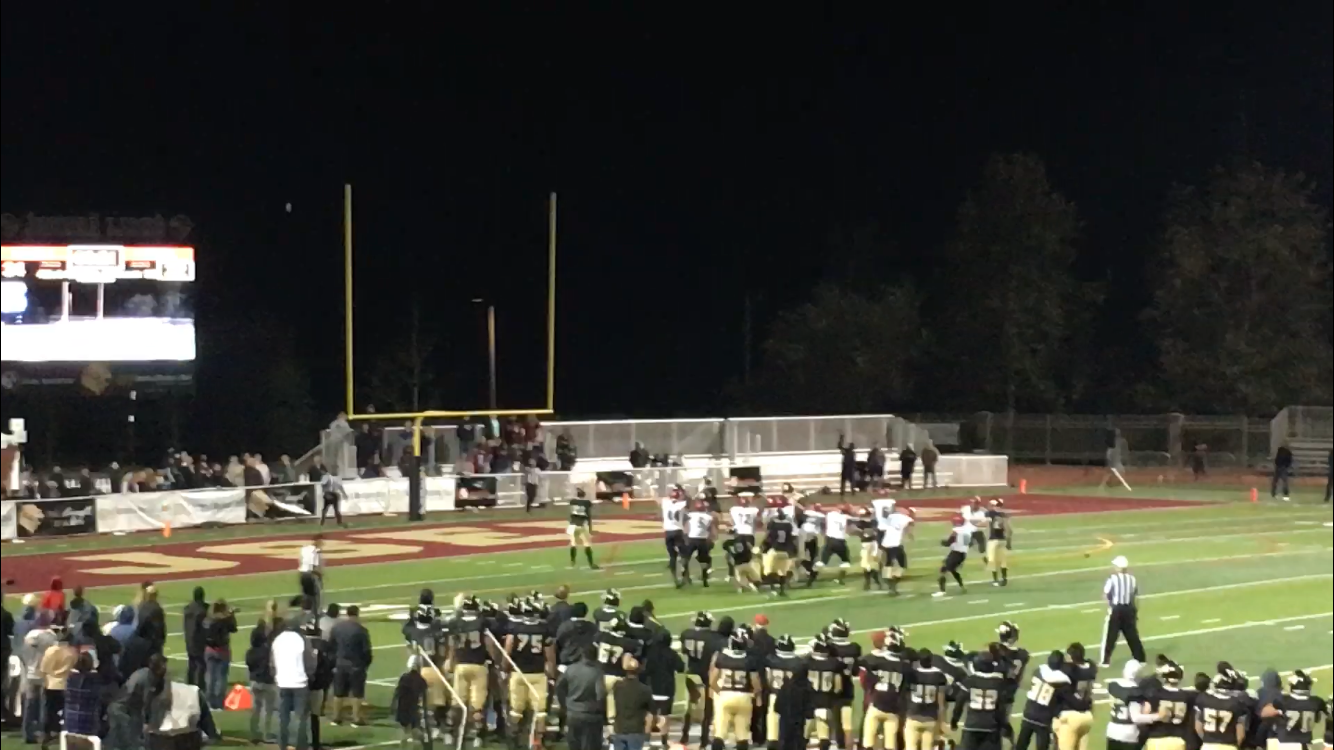 SAN JUAN CAPISTRANO – An entire football season’s worth of work can come down to one play, one point.

One point away from extending a game, one play away from winning a game, one instant away from making history. Being so tantalizingly close to those things and coming up just short can be hard to stomach, but that’s where the JSerra football team finds itself after Saturday night.

With an opportunity to advance to its first semifinal in program history, JSerra came out on the wrong end of a hard-fought, one-point thriller as Oaks Christian of Westlake Village battled through at-home adversity to claim victory, 35-34, in a CIF-SS Division 1 quarterfinal at JSerra Catholic High School.

“Give Oaks all the credit in the world for coming out and winning the game,” JSerra coach Pat Harlow said. “Ultimately, I’m disappointed in the way we performed. I thought that’s a game we should’ve won. We had a lot of opportunities to win it.”

No. 4 seed Oak Christian (12-0) moves on to the Division 1 semifinals against national No. 1 St. John Bosco.

The quarterfinal against JSerra (9-3) was moved to Saturday as Oaks Christian’s families and community dealt with the Woolsey Fire in Ventura County. Oaks Christian also had last week’s mass shooting at the Borderline bar in nearby Thousand Oaks on their mind, as well, as quarterback Tripp Mitchell had “Borderline Strong 11/7/18” written on his pads.

The lead and the edge into the semifinals changed hands three times in the fourth quarter.

JSerra held a three-point lead into the final frame, but a roughing the punter penalty and a fourth down conversion extended an Oaks Christian drive. A mix-up in the JSerra secondary left an Oaks Christian receiver completely alone in the end zone for a 32-yard touchdown pass to grab the lead, 32-28.

JSerra responded with quick and efficient drive as Columbia-committed senior Caden Bell  completed a 36-yard pass to USC-committed senior Munir McClain and another between the two on a 12-yard swing pass to the right for a touchdown. However, JSerra missed the extra point and only led by two points, 34-32.

JSerra’s defense came up with a stop with a sack between senior Victor Clanton and sophomore Jaden Genova, but the JSerra offense couldn’t shave off enough time on the clock with a timeout, plays out of bounds and incomplete passes.

Oaks Christian got the ball back with 2:21 remaining to get the go-ahead score.

Running back Zach Charbonnet broke off a 23-yard run to set up Oaks Christian in solid field goal range. Charbonnet was a workhorse for Oaks Christian with 27 carries for 184 yards and a 33-yard touchdown reception.

Oaks Christian nailed a 27-yard field goal for the lead, 35-34, with 18 seconds remaining.

FG: Oaks Christian retakes the lead over JSerra, 35-34, 0:18 remaining. Penalty on the celebration. JSerra gets one more attempt. @CapoDispatch pic.twitter.com/2ILeREJcnt

JSerra got off two more plays, including a heave to the end zone that went off a JSerra receiver’s hands, but JSerra couldn’t find the extra edge.

“There’s not one play that did it,” Harlow said. “If I look through the film, I guarantee I can find 15 plays that changed the complexion of that game. These type of games usually come down to five or six plays, you just don’t know where they are.”

JSerra had opportunities to run away with the game with two separate two-score leads early in the game.

Two big, first-play touchdowns, a 30-yard pass from Bell to McClain and a 75-yard burst by junior Chris Street, put JSerra up 14-0 in the first quarter.

Oaks Christian battled back with a 33-yard shovel pass touchdown to Charbonnet, and a 30-yard run by Charbonnet that set up the tying touchdown early in the second quarter, 14-14.

JSerra wasn’t able to take advantage of an interception by senior Hagen Foreman, and Oaks Christian found the lead after a short punt on 31-yard field goal, 17-14.

On the ensuing drive, Street found room on a 48-yard run, and Bell pushed in a one-yard sneak for the score and the lead again, 21-17.

On the second play of the second half, JSerra again went up by two scores with a 60-yard burst up the middle by sophomore Samuel Green that weaved up the field for the touchdown and 11-point lead, 28-17.

JSerra’s next offensive play set up the dramatics that followed in the fourth quarter as Oaks Christian grabbed a pass right off the shoulder of a JSerra receiver and returned it 25 yards for a touchdown to cut the lead back to three points, 28-25.

It was the final game for many impact seniors at JSerra. The senior class chose to wear black jerseys and gold pants like they wore in their first game as freshmen.

“I’m very proud of the kids,” Harlow said of the season. “They battled, they grew as men. I’m very proud especially of our senior class, but at the same time, when you lose this game, all you can think of is the what-ifs.”

However, a game like this is fuel for those that remain to go forward with the program.

Street, a junior who made a huge impact in the running game in his first season as a transfer from Mater Dei and ran for 171 yards on 16 carries against Oaks Christian, yelled and repeated before the final postgame huddle break, “This is not happening next year!”

“That’s what we’re going to sell to them,” Harlow said of using this result as motivation. “Let’s see if they buy it, see if we can get better.”