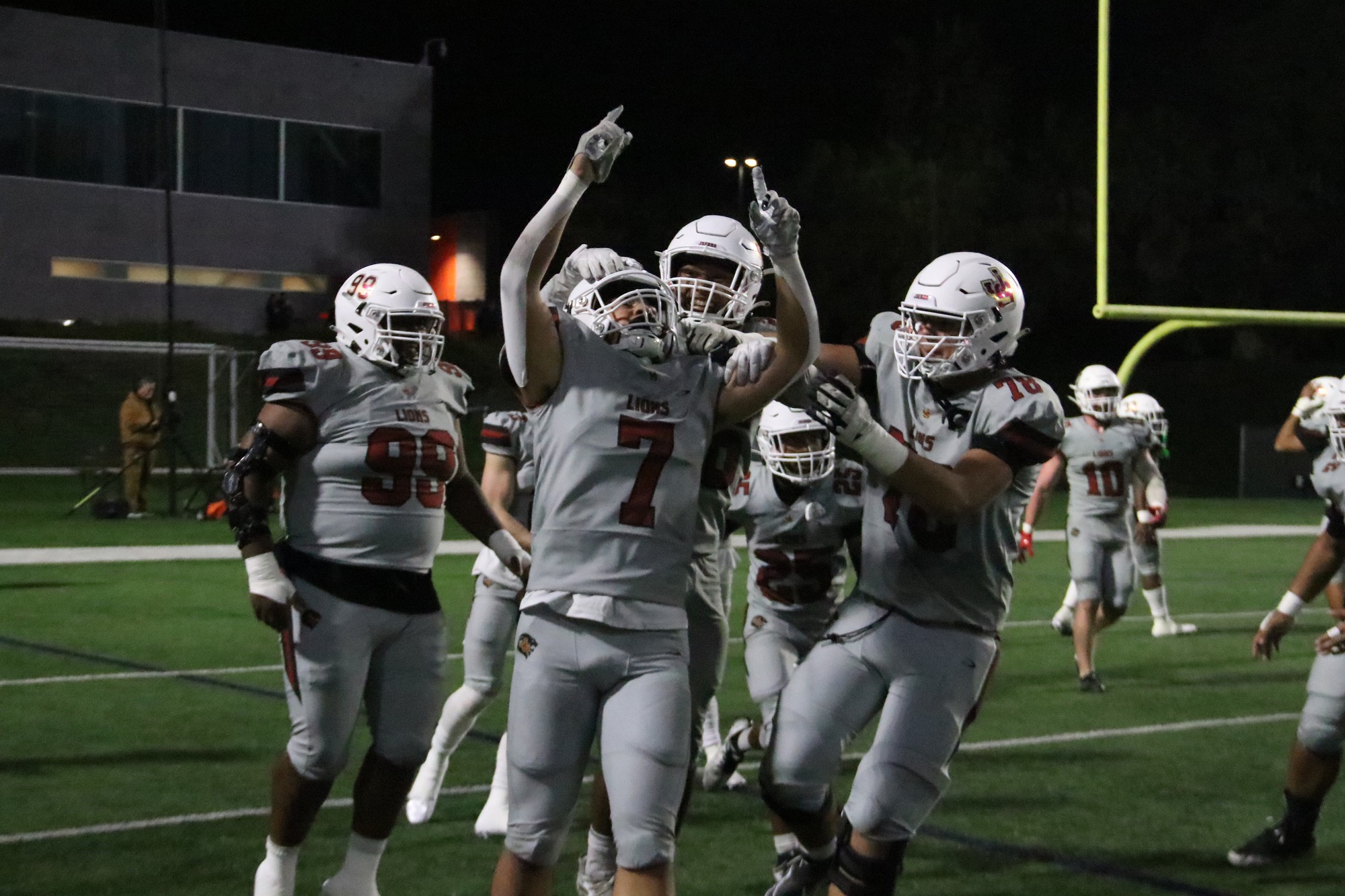 COSTA MESA – The JSerra football team had its fate mostly in its own hands on Friday night, Oct. 28.

A win either gave the Lions an automatic playoff berth or, at minimum, shored up its at-large resume with an even record. A loss would put JSerra at the mercy of the CalPreps rankings and the at-large selection process with a losing record.

JSerra did its part, and in turn, everything came up Lions.

JSerra’s defense led the way with six turnovers, including a pick-six by Jack Munro as one of three interceptions, and George Perez scored touchdowns rushing and receiving to put the visiting Lions over Orange Lutheran, 20-7, in the regular-season finale at Orange Coast College.

Paired with Santa Margarita’s loss to St. John Bosco, JSerra (5-5, 2-3) forced a three-way tie for the third and final automatic playoff berth out of the Trinity League. The Lions also won the tiebreaking envelope draw to claim the automatic berth, which means Santa Margarita (6-4, 2-3) and Orange Lutheran (6-4, 2-3) will look for at-large selections to the CIF-SS playoffs.

All three teams should make it, and all three, along with No. 1 Mater Dei and No. 2 St. John Bosco, could end up in Division 1, depending on the size of the bracket. All CIF-SS divisions and brackets will be revealed on Sunday, Oct. 30, at 10 a.m.

JSerra won back-to-back Trinity League games for the first time since 2018, when the Lions also beat Servite and Orange Lutheran in consecutive weeks. JSerra head coach Scott McKnight said that the playoffs started two weeks ago for his group, and their season-long effort was paid off in the final two weeks.

JSerra’s efforts have begun with its defensive grit, and that was no different on Friday night.

The Lions held Orange Lutheran under 100 yards in the first half with just four first downs. The Lancers finished the night 15 of 42 passing for 198 yards and a late third-quarter touchdown with just 51 yards rushing. Orange Lutheran converted just three of its 13 third-down attempts, with its only second-half conversion coming on a penalty.

Orange Lutheran was playing without its injured starting quarterback TJ Lateef and instead started freshman Alex Medyn, who was relieved after the pick-six by sophomore John Gazzaniga.

JSerra snagged three interceptions from Munro, Aiden Aguayo and Kamar Garbourel, all in the second half. Munro also forced a fumble in the first half that was recovered by Dallas White, and the Lions forced two turnover-on-downs.

“I thought we tackled well. I thought we played well in space. I thought we brought pressure,” McKnight said. “We were put in a lot of difficult situations, and we held up through it all. Proud of our effort defensively.”

JSerra’s offense provided just enough punch with scores on the Lions’ first and last drives of the first half.

JSerra came out alternating run and pass plays on a seven-play drive. Junior quarterback Zander Singh hit Jose Frutos on a 28-yard pass and Josh Jornadal on a 15-yard pass to set up a 3-yard touchdown run by Perez. JSerra missed the extra point but led, 6-0.

After a fourth-down stop late in the second quarter, JSerra executed its two-minute offense, with the help of a pass interference and personal foul on Orange Lutheran. The Lions capped the drive with a 6-yard loft from Singh to Perez, who dove for the near pylon to complete the score with five seconds left in the half.

Singh completed 11 of 16 passes for 94 yards, a touchdown and an interception. Perez ran the ball 22 times for 74 yards. Jornadal caught three passes for 32 yards.

JSerra led 13-0 at halftime, and coming out of the locker room, Orange Lutheran’s second half-opening drive ended in disaster.

The Lancers were set back on a holding penalty, and on the 3rd-and-22, the JSerra line drove the Orange Lutheran quarterback towards the end zone. A desperate pass attempt was thrown up and it came down into the arms of Munro, who waltzed in on a 17-yard score for the 20-0 lead.

“I was originally lined up on the wrong side,” Munro said. “I was supposed to put him on the other side and play to the three-receiver side. Our D-line, they’re some dogs out there. They get after quarterbacks and make them make decisions they shouldn’t make. I just happened to be in the right spot.”

Penalties dragged the second half into a slow burn, as neither team could gain its footing.

Orange Lutheran eventually tacked on its lone score late in the third quarter. The Lancers were aided by two personal fouls and a pass interference against JSerra and converted on fourth down. Orange Lutheran scored on a 14-yard TD pass.