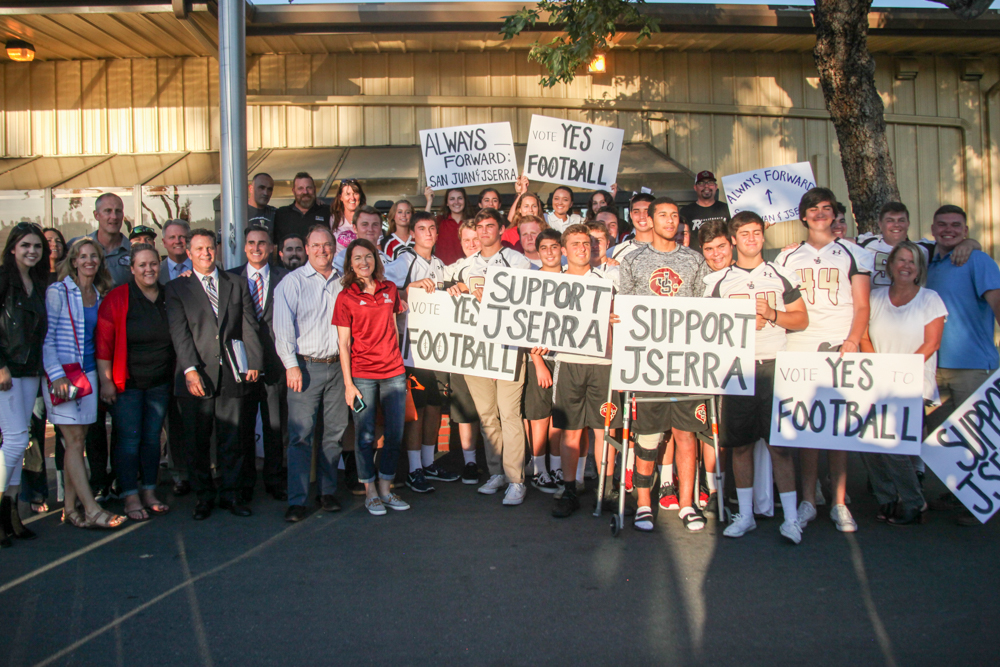 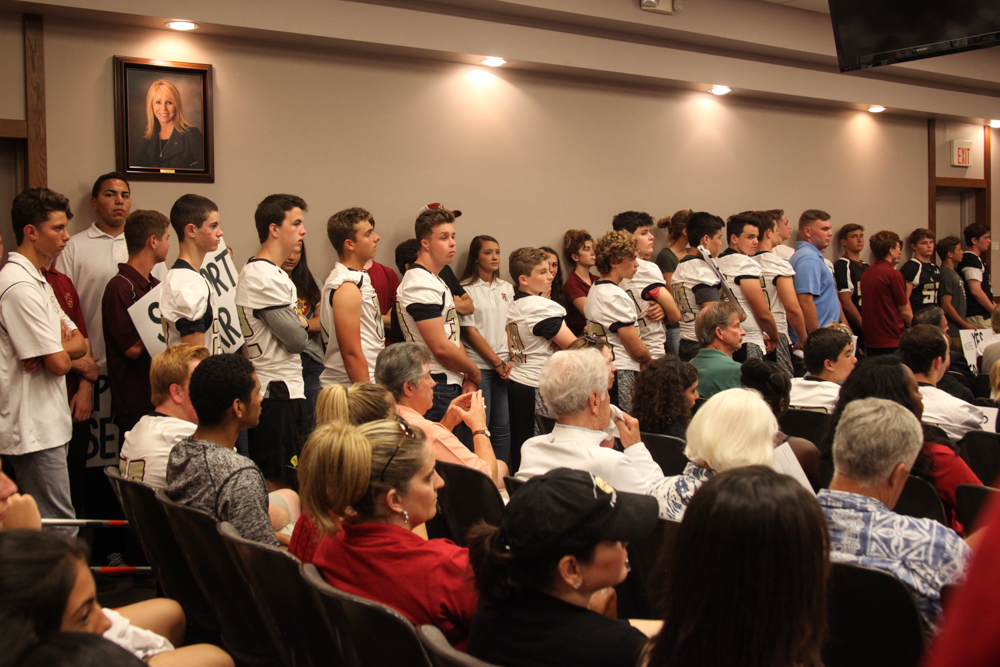 JSerra football players lined the walls of the City Council chambers at the start of Tuesday's meeting. Photo: Allison Jarrell 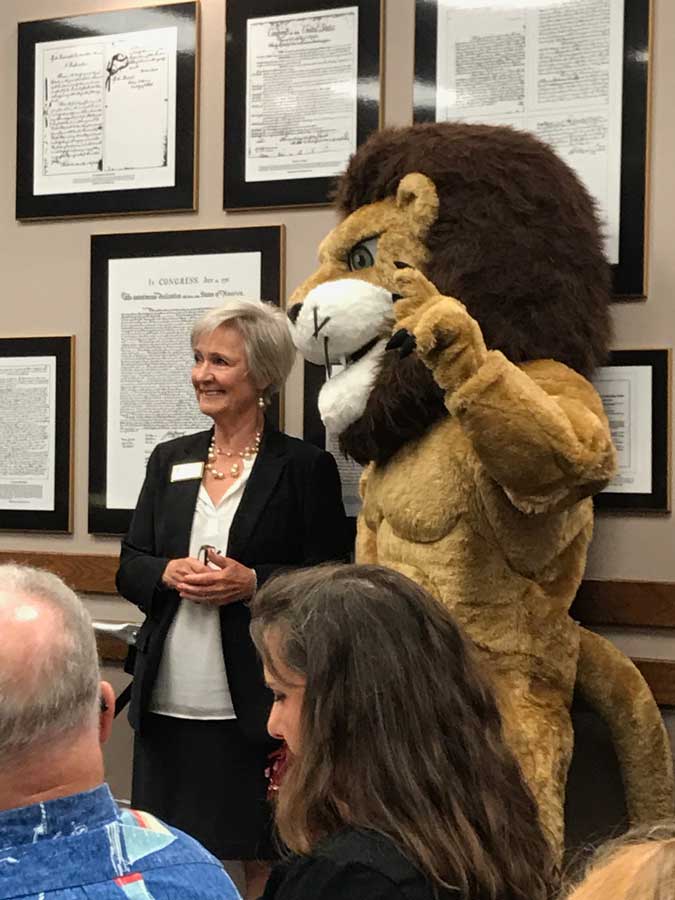 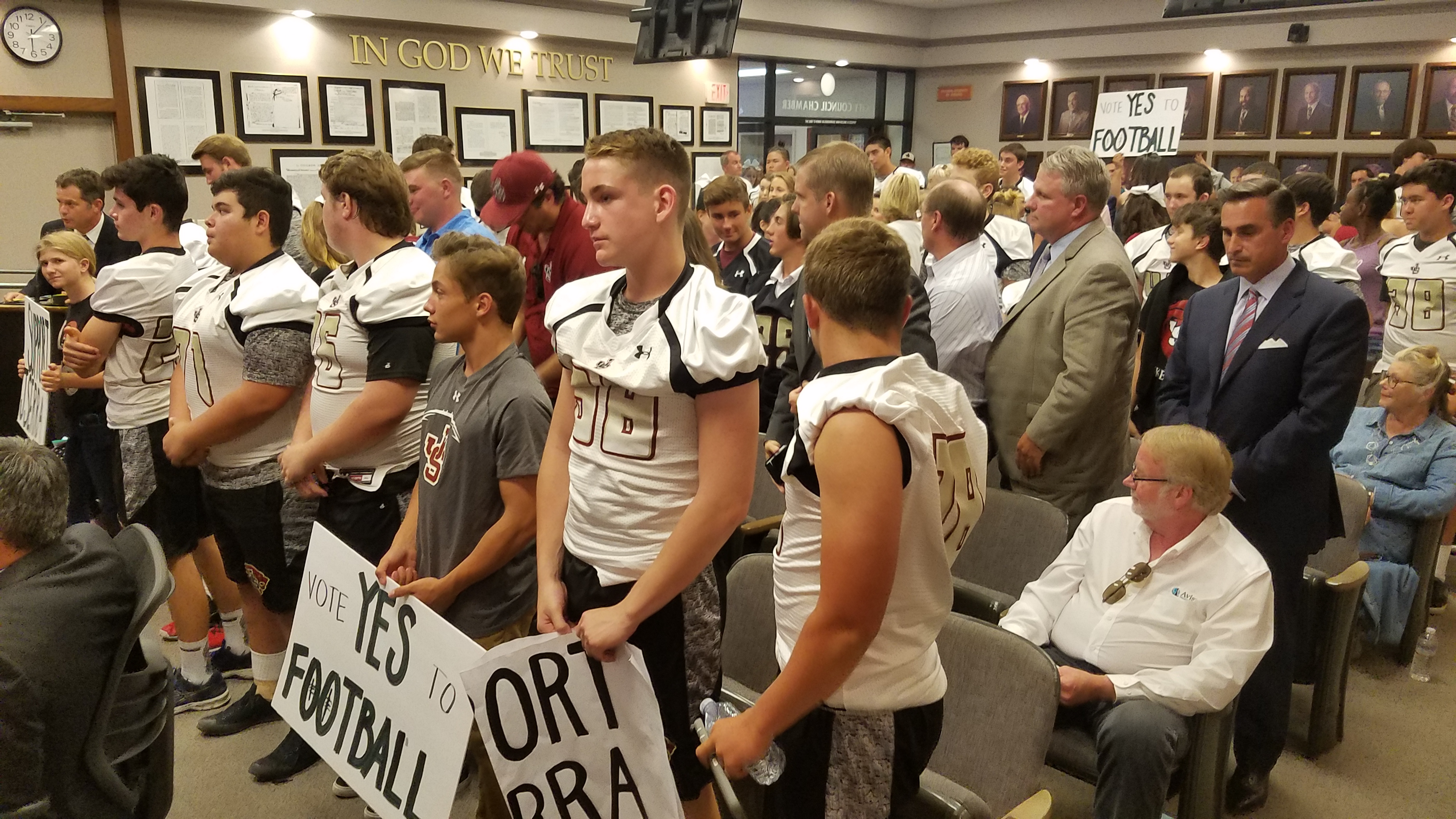 JSerra football players and supporters rose to their feet when a speaker asked who in attendance supports the five home games. Photo: Allison Jarrell 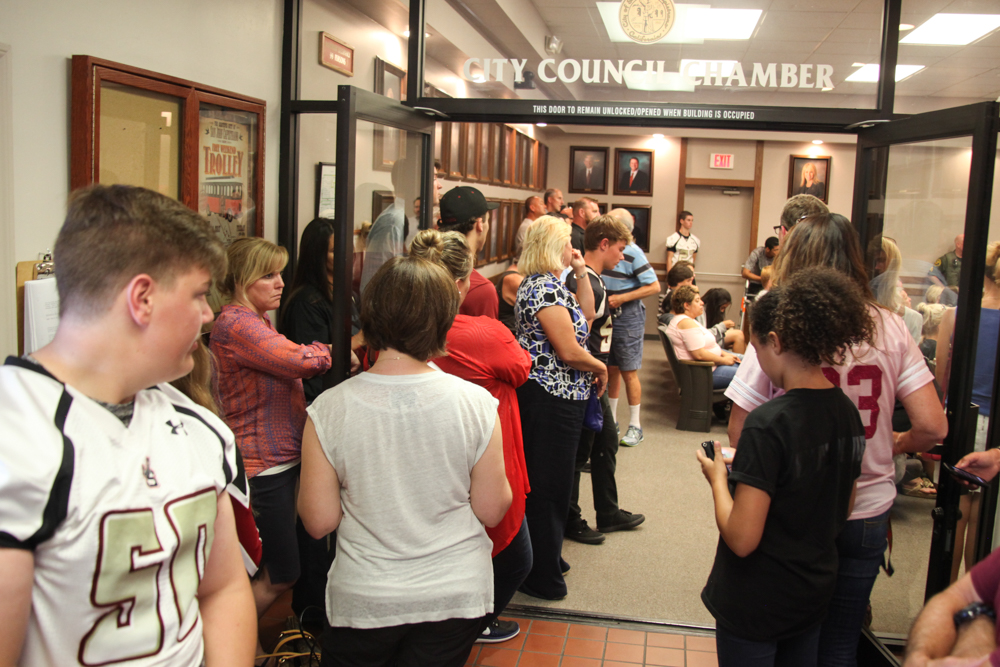 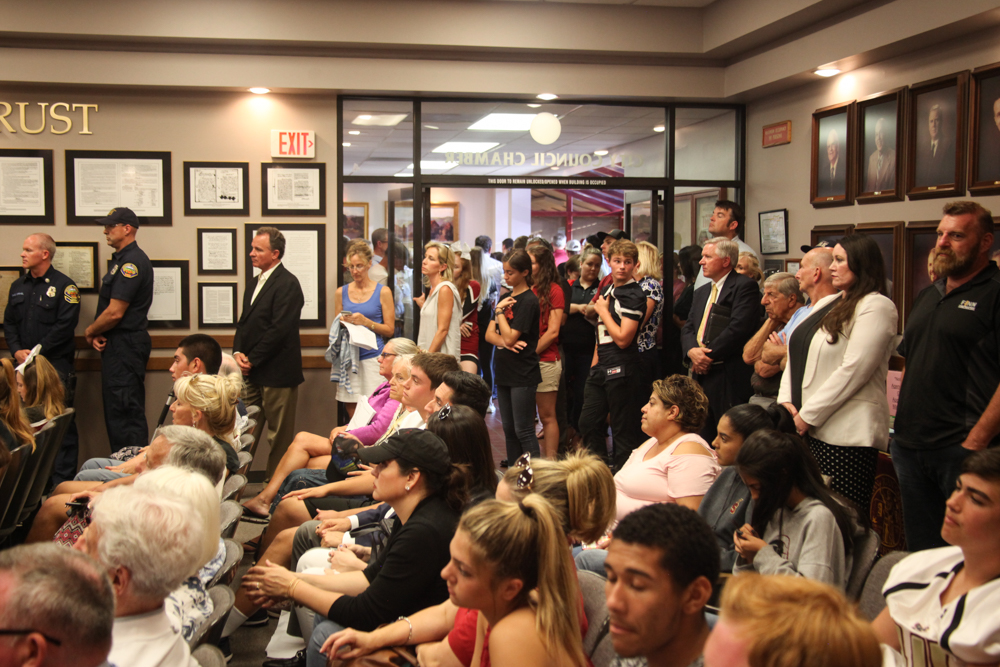 JSerra students, staff and supporters wait inside and outside the crowded Council chambers for a verdict. Photo: Allison Jarrell

By Allison Jarrell and Steve Breazeale

For the first time in the school’s history, Friday night football is coming to JSerra’s campus.

The San Juan Capistrano City Council voted 4-0-1 on June 20 to allow the home games after receiving a request from JSerra High School to use the existing campus football facilities for five games this fall. The approval was met with an eruption of cheers and applause from the over 100 supporters in attendance Tuesday night—from JSerra football players and cheerleaders, to staff, parents and even the Lions’ mascot.

The competitive program, which plays in the high-profile Trinity League, has spent the past several years playing its home games at nearby Saddleback College in Mission Viejo. But renovations to Saddleback’s campus stadium will make the site unavailable to JSerra in the fall.

The inability to find a site forced JSerra to look inward.

“Our only option was to play at home,” Harlow said.

The site of the new “stadium” will be JSerra’s already existent practice football field on the south side of campus. The school plans on erecting temporary bleachers around all four corners of the field. Current plans presented to the City Council say there will be enough seats to accommodate between 1,000 to 1,500 fans per game.

Parking on JSerra’s north and south campuses will be open on game days, and the school will utilize shared parking with the nearby Kaiser Permanente medical facility. If the need for more parking spaces arises, JSerra is able to use an extra 100 spaces at Saddleback Valley Christian School across the street.

The Council approval did come with some stipulations. The city did not approve temporary parking on Camino Capistrano as JSerra had requested, because staff said it would impede traffic flow and potentially cause delays.

And after hearing from a couple concerned residents who live near the practice football field, the Council also decided to direct staff to organize follow-up meetings after each game with city officials, JSerra representatives and nearby residents in order to address any problems that arise. The two residents who addressed the Council with concerns said lighting, noise and errant soccer balls and baseballs have been ongoing issues.

“It’s a matter of trust,” one resident said. “We need some accountability.”

JSerra President Rich Meyer told the Council that the school’s staff members are committed to mending relationships with their neighbors.

“We recognize that a simple meeting one time isn’t going to heal all wounds and recover trust that may have been lost over a period of 14 years,” Meyer said of previous outreach efforts. “We are committed to building a solid relationship. While we can’t undo what may have been said or promised (in the past), we are committed to making this a great partnership moving forward.”

“The City Council was fair and honest with our request and there is a lot of work that needs to be done to host these games in a way that lifts up JSerra but also takes our neighbors and community into consideration,” Ledyard said. “We are now going to begin work with the city and the community to make sure all needs are met and that we provide a great atmosphere for the Lion Nation, the visitors, and the city of San Juan Capistrano.”

The use of its home field is only a short-term solution for JSerra. The school will be able to use its facilities for just five games this season beginning in September and ending in early November. After that, the entitlements approved by the city will expire.

“In 14 years our kids have never had a true home game. Everybody is just stoked,” Harlow said. “I think that will be a really cool experience for high school kids. It’s a great way to build school spirit and hopefully San Juan residents will come and watch us and we can make them proud.”

The following five games will be played on JSerra’s campus this fall: 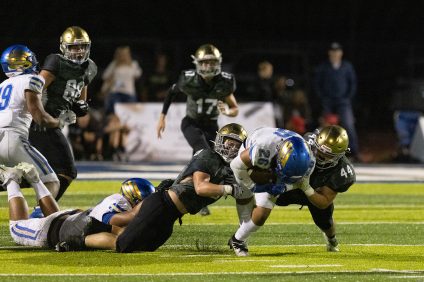