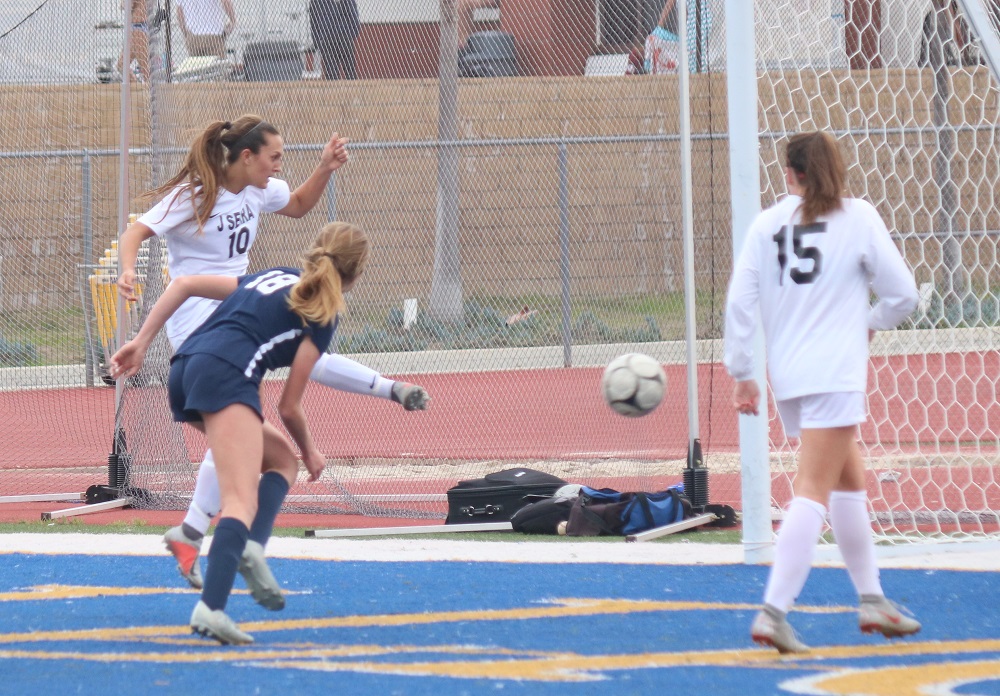 SAN JUAN CAPISTRANO – The JSerra girls soccer team continued on with business as usual on Tuesday.

Once again, the Lions were the best team on the field from the opening kick and applied constant pressure against San Juan Hills on their way to a 3-0 win in the CIF-SS Division 1 quarterfinals at San Juan Hills High School.

Isabella D’Aquila added two more goals to her impressive career totals for top-seeded JSerra. Goalkeeper Ryan Campbell and the Lions posted their 15th shutout of the season and second of the playoffs.

San Juan Hills (12-5-8) made its first-ever CIF-SS quarterfinal appearance after finishing third in the South Coast League this season.

JSerra pinned San Juan Hills in its own end for the large majority of the 80 minutes, but the Stallions put up a physical and aggressive defensive effort.

The Lions came in waves and from all angles with set pieces, runs up the flank and plays straight through the middle. D’Aquila and Samantha Williams generated most of the JSerra chances along with charges from Jordyn Gather from the back end.

Noelle Christensen and Elyse Hall put up the strong defensive front for San Juan Hills and turned away chances while playing tight to Williams and D’Aquila through the majority of the first half.

Despite the Stallions’ best efforts and back-to-back crossbar shots for the Lions, JSerra finally broke through in the 39th minute.

Another JSerra ball into the box turned into a scrum, and D’Aquila finally found her footing to boot the ball through off her right foot for the lead, 1-0.

D’Aquila struck again early in the second half.

In the 48th minute, Williams played a ball into D’Aquila who calmly poked the ball through to the right side with nary a celebration to put JSerra up, 2-0. All business for the Lions.

JSerra continued to carry the play and added their final tally on a set piece in the 76th minute.

Williams took the corner kick from the left side and sent it to the far side of the box. Abby Lynch leaped up and got her head on it for the strike and the 3-0 lead.

JSerra got to its third straight semifinal in strong fashion. The Lions opened with a 5-0 win at home over Rancho Cucamonga and outlasted Long Beach Milikan in overtime, 2-1, in the second round before taking on San Juan Hills.

San Juan Hills moved through to the quarterfinals with a 1-0 overtime win over Corona Centennial in the first round and a home win over Troy, 1-0, in the second round.