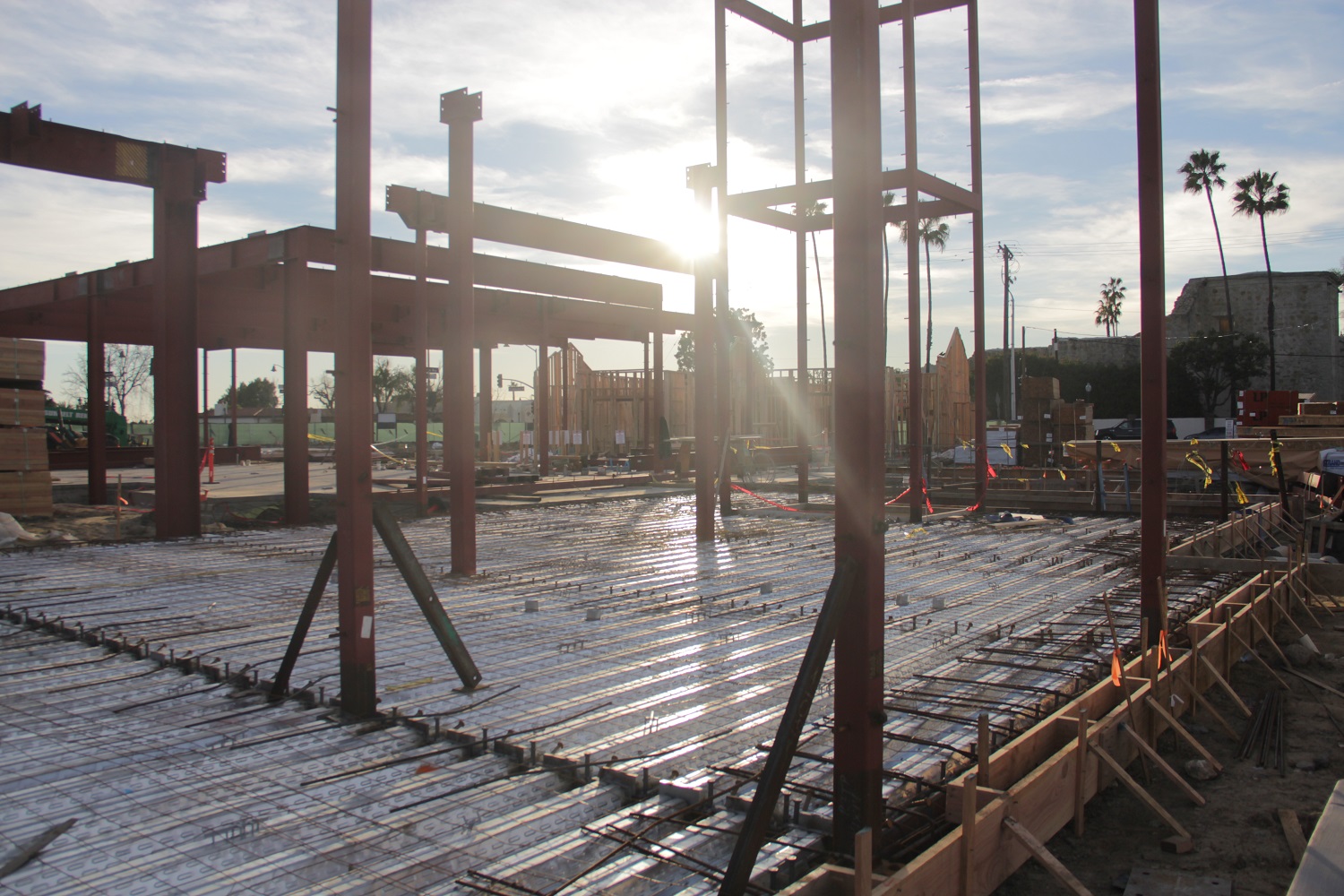 UPDATE: Judge Glenda Sanders of the Superior Court of Orange County earlier this week officially ruled in favor of Save Our Mission’s right to sue the city and Mission Commercial Properties, the developer of the Plaza Banderas hotel project adjacent to Mission San Juan Capistrano.

In her Oct. 1 ruling, Sanders stated that Save Our Mission “has standing to bring this petition,” which challenges the series of design modifications to the hotel that the city approved of back in early 2018.

The group alleges that the city violated the California Environmental Quality Act when it approved the modifications that Mission Commercial proposed, creating “new or additional substantial impacts, including impacts to the view to and from the historic Mission.”

After Save Our Mission filed its lawsuit in April 2018, the court bifurcated the case into two phases, the first of which regarded the issue of whether the advocacy group had a legal standing to sue.

The second phase of the case, which is now expected to proceed following the latest ruling, will be based on the merits of Save Our Mission’s arguments. The group claims that the city-approved revisions to the hotel’s three buildings in the final construction plans don’t jive with the conceptual design plans the city approved in 2011.

Citing the group’s complaint, Sanders explains the group’s argument the changes “eliminate or substantially reduce the commercial/retail components of the Initial Plan, and replace that space with additional hotel space and hotel-related use,’ and make changes to elevations of the buildings ‘which block views and from the Mission San Juan Capistrano, a historical site.’”

A status conference for the case  has been scheduled in Sanders’ court room in Santa Ana for Wednesday, Oct. 16.

Editor’s Note: This story has been updated to include comments from Mission Commercial’s attorney Rick Friess.

An Orange County judge has tentatively ruled that a local group challenging a series of city-approved modifications to the Plaza Banderas Hotel project does have a legal right to sue the city and the hotel’s developer.

On Friday, July 12, Judge Glenda Sanders of the Superior Court of Orange County handed down her tentative decision, which states that Save Our Mission “has standing to bring this petition,” which was filed in April 2018.

The tentative decision also denies a motion from the project’s developer, Mission Commercial Properties, which sought a nonsuit, or dismissal, based on Save Our Mission’s decision to dismiss a related suit it filed this past February.

“As the attorney for Save Our Mission, we’re quite pleased that the court saw through the Friess and the Griffith groups’, I would say, tenuous positions regarding the standing issue and the other collateral issues,” said Charles Krolikowski, counsel for Save Our Mission.

Friess added that Save Our Mission’s complaints are “silly” and that its claim is meant to just cause trouble and delay the construction of the hotel.

“If they actually cared about this hotel, they would have sued when this hotel approval was initially granted,” Friess said. “To complain about this roofline and whether it follows architectural plans, that’s just silly … this is just about causing trouble and causing delay.”

Plaza Banderas, sometimes referred to as Inn at the Mission, is currently under construction and is expected to open this winter. When complete, the 75,000-square-foot hotel will feature 124 rooms, as well as retail and commercial space for restaurants and private offices.

Several voices in the community have come out against the hotel project as it obstructs the view of the historic Mission San Juan Capistrano, particularly when entering the city from Ortega Highway.

“We look forward to getting to the merits of the case, that they violated (the California Environmental Quality Act) and with the results having to rip down the hotel for failing to follow the law,” Krolikowski also said of the tentative ruling.

Save Our Mission had filed two lawsuits against the city and Mission Commercial, both of which stem from modifications the city allowed the developer to make to the hotel’s plans last year.

The first complaint, the group filed in April 2018, challenges a determination by the city’s design review committee in February of 2018 that a revised architectural design for the final construction plans of the hotel’s three buildings was consistent with conceptual design plans the city approved in 2011.

Save Our Mission challenged that approval by filing an appeal to the city in March 2018, but was later denied by the city council, prompting the group to file the first lawsuit. The initial suit is seeking to have the modifications set aside as they allegedly violate CEQA by creating “new or additional substantial impacts, including impacts to the view to and from the historic Mission.”

The second suit, which Save Our Mission dropped this past March, alleged the city again failed to comply with CEQA when it approved a handful of other site modifications Mission Commercial proposed last summer.

Prior to bringing forth the second lawsuit, the group challenged the summer approvals through an appeal last October. That appeal was also unanimously nixed by the council, as the city argued that based on the planning commission’s findings, the modifications to the hotel didn’t require a new Environmental Impact Report (EIR).

Krolikowski said the group decided to drop the second suit as there had been issues over the timeliness of its filing and also because the claims raised in the supplemental complaint weren’t something the group wanted to pursue at this time, believing it would’ve delayed progress in the first suit.

According to the latest court filing, Mission Commercial argues the group’s complaint should be barred because it dismissed its recent suit, citing the “doctrine of claim preclusion,” which prevents the same cause of action to be litigated again in a second suit between the same parties.

Judge Sanders noted that while both complaints “include much of the same background,” the “petitions are otherwise different” as the 2018 lawsuit addresses design modifications that were approved in early 2018 and the 2019 lawsuit addresses additional revisions approved in the summer of 2018.

“While the 2019 Petition is not a model of clarity and non-specific references to ‘modifications’ are made throughout the First Cause of Action, it is clear from the introductory paragraph and that the two petitions address different purported noncompliant modifications,” Sanders said in the tentative decision.

The judge also notes that the group’s dismissal of the second lawsuit “does not result in claim preclusion where the 2019 Petition specifically differentiated itself from the 2018 Petition.”

A trail on the question of whether Save Our Mission had standing to bring its case was held in late March. Mission Commercial suggested that an unincorporated association such as Save Our Mission must “comply with additional requirements such as holding monthly meetings, and drafting bylaws,” the latest court filing states.

Steve Behmerwohld, a longtime San Juan resident and vice president of the San Juan Capistrano Historical Society who the court acknowledged has been involved in the project from the outset, “as he has been familiar with Plaza Banderas for 10 to 11 years,” is listed as a member of Save Our Mission and testified during the March hearing.

Sanders also noted that there’s “insufficient evidence” of Mission Commercial’s argument that Save Our Mission had competing interests based on alleged relationships between some of the group’s members and another developer.

“The fact that some members of SOM may also have other motives for challenging the adequacy of CEQA review, does not outweigh the environmental interests and commitment demonstrated by other members to the City and the Mission,” Sanders stated.

The court document doesn’t specify which developer Mission Commercial was referring to, but according to Krolikowski, Friess had previously invoked Steve Oedekerk’s name. Krolikowski said Oedekerk, who had faced a lawsuit from Griffith over his attempt to get a competing hotel project built in the downtown district, is not a member of Save Our Mission.

Friess confirmed that he was referring to Oedekerk, believing Save Our Mission isn’t a real group, but rather a thinly veiled effort to support the competing developer.

Krolikowski said that with the court’s latest decision, he’s considering filing a request for injunction, which could halt construction of the hotel until there’s an official ruling on the case.

“So now we’re going to get to the merits of the case … now I feel we’re in a better position for a request for injunction,” he said.

A status conference hearing for the lawsuit is scheduled for Aug. 28 at 1:30 p.m.