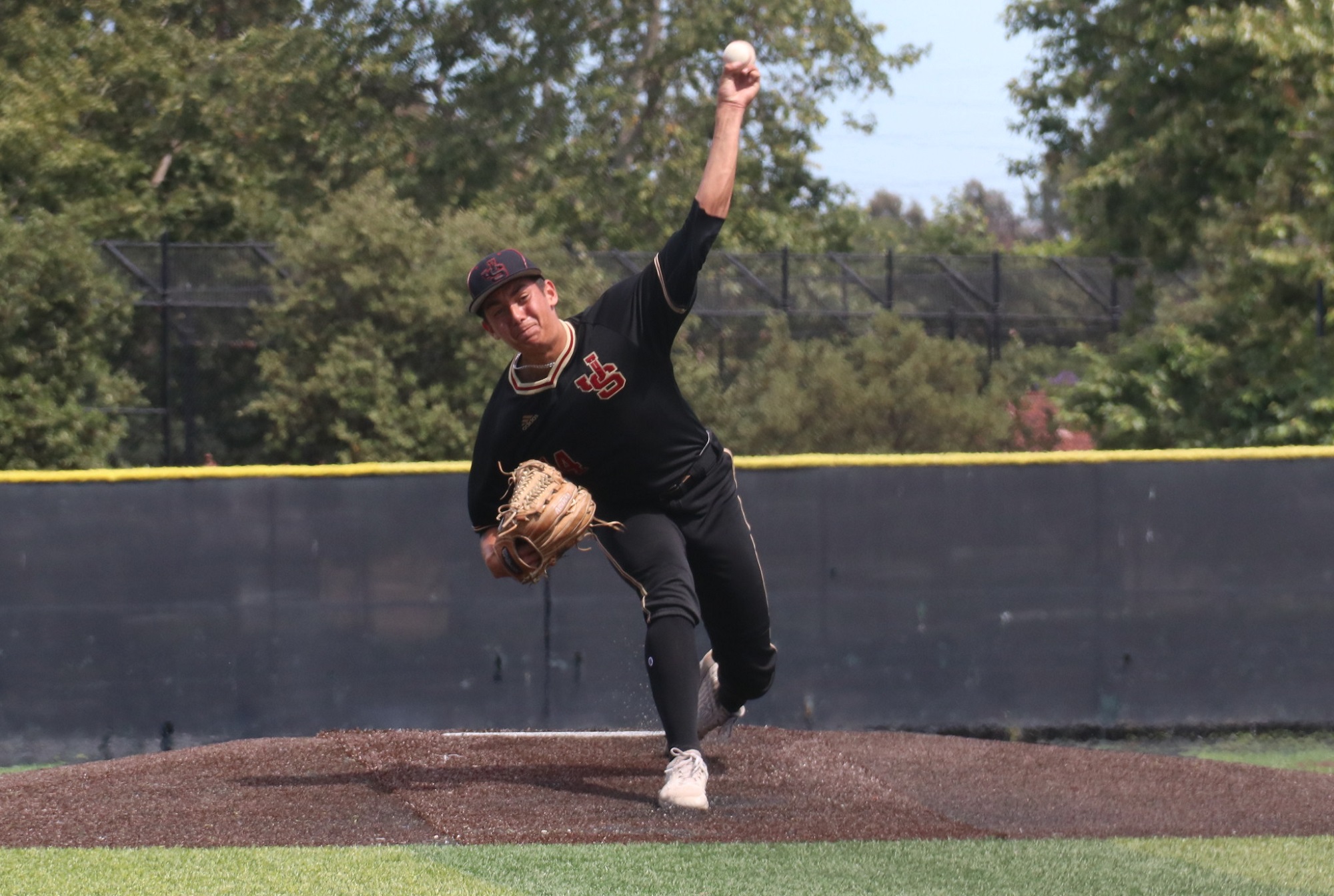 The rest of CIF-SS Division 1 should fear whatever Jump’s best actually is.

Jump faced the minimum 18 batters over six innings and posted 13 strikeouts to combine with JSerra junior reliever Tristan Lamaison on a no-hitter as the top-seeded Lions opened their Division 1 playoff run with a win over Capistrano Valley, 4-0, in a second-round game at JSerra Catholic High School.

Jump’s 13 strikeouts tied a career high as JSerra recorded its third no-hitter of the season, fifth in school history and the first ever in the playoffs. Jump struck out eight of the nine Capistrano Valley batters in the line-up at some point on Tuesday on the strength of a devastating curveball that offset his low-90s fastball.

“He’s done that all year,” Kay said of Jump’s curveball mastery. “He fights himself on some occasions, but he’s really good with that breaking ball. The command is what separates him from previous years. We used to get 80 pitches and three innings or four innings, now we’re getting six out of him and can command that breaking ball whenever he wants.”

Kay, who notched his 300th career win as head coach, remarked that he thinks Jump is the best pitcher the Lions program has ever had. Jump signed with UCLA, but he also figures to be an early pick in July’s MLB Draft.

Jump and his stat line wowed many in attendance on Tuesday, but again, nothing got people to react like his swooping curveball that buckled nine of Capistrano Valley’s first 11 batters.

“My curveball has been on the last couple games,” Jump said. “Just throwing it early in counts, late in counts too. I can do pretty much whatever I wanted with it. I can speed it up and slow it down. That’s been my bread and butter.”

While Jump was just getting to work, top-seeded JSerra showed no rust from the 13 days off with last week’s first-round bye. UCLA signee Cody Schrier led off with a walk, which was followed by a single by Eric Silva, also a UCLA signee. Jump helped his own cause by clearing the bases with a triple for the early lead, 2-0.

Jump later scored on an RBI groundout by David Horn, and Connor Saccullo hit another first-inning triple to score Luke Jewett, who had reached base on a walk. JSerra led 4-0 after the first inning, and that was all the Lions would need.

Back on the mound, Jump didn’t allow his first baserunner until a two-out walk in the fourth inning. However, Jump stayed at he minimum as the runner was thrown out after over-sliding into second base.

Jump then struck out the side in the fifth, with two looking, before he allowed another baserunner on a lead-off walk in the sixth. Jump was bailed out on a line-drive to the second baseman who turned a double play to again keep Jump at the minimum.

Jump did all of this while battling leg cramps from the third inning onward. The cramps paired with Jump’s season-long pitch out mandate of 85 pitches led Kay to remove Jump after the sixth inning.

Lamaison came on in the seventh and allowed another lead-off walk. After a strikeout, Lamaison was able to clear the base paths and keep JSerra at the minimum with a game-ending 6-4-3 double play.

JSerra moves on to the Division 1 quarterfinals and will host Yucaipa on Friday. Yucaipa defeated Vista Murrieta in the first round, 15-4, and Damien in the second round, 9-7. The quarterfinals at JSerra will be Yucaipa’s first road playoff game this season.