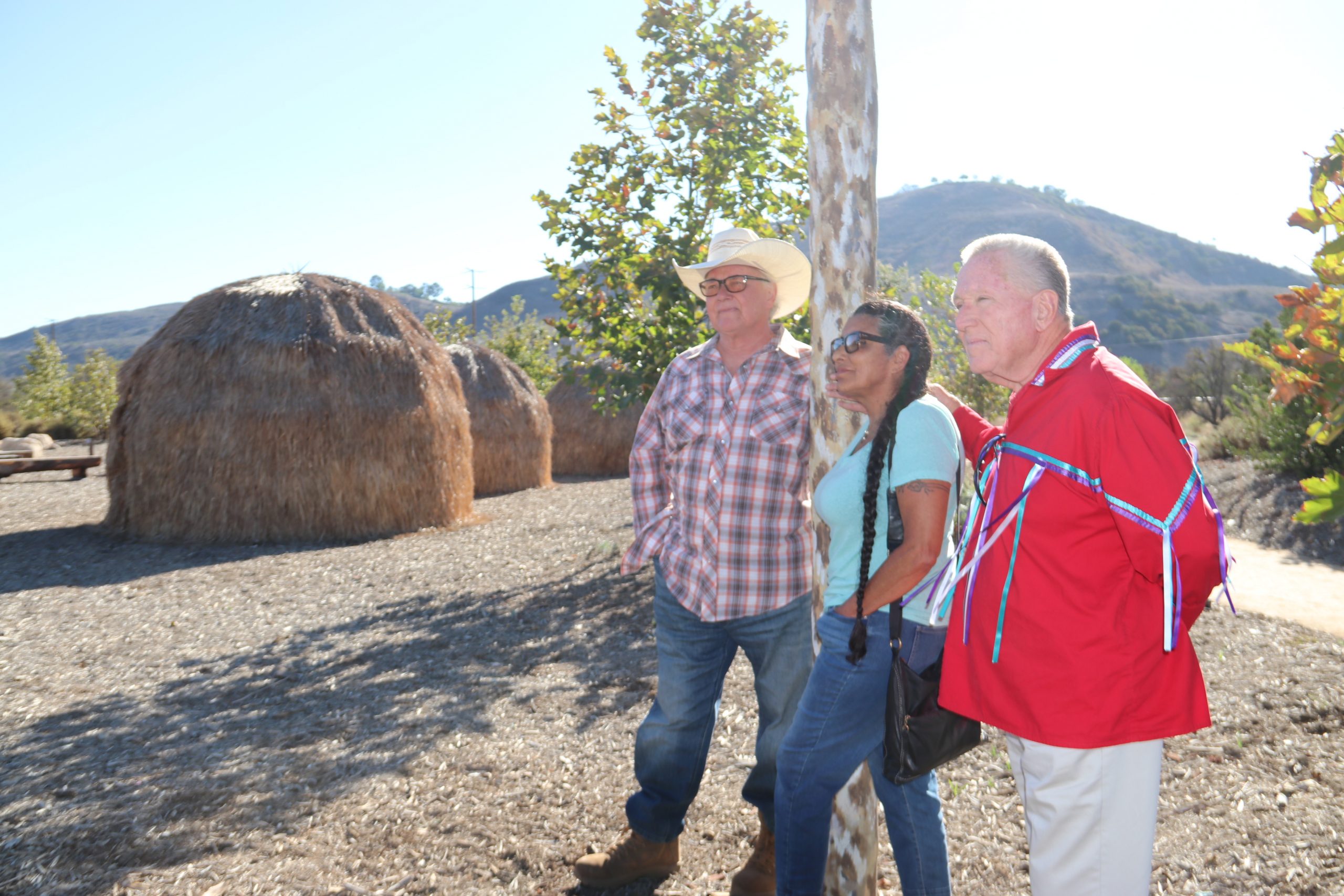 “I’m glad it’s been changed. I was never comfortable with, and never really liked, that parochial hugging of that young boy,” said Rios, who lives on Los Rios Street and has deep ancestral ties to San Juan. “I think it sends a wrong message. I think it sent a message that was untrue to many people, and not all the priests loved the children. Not all the priests loved the people. We know that story. We know the brutality that we went through. It’s kind of an illusory projection of, ‘I’ll protect you,’ starting when they were kids.”

Members of the local Juaneño/Acjachemen community—the Native Americans who first lived in what is now San Juan—recently shared their takes on Serra’s legacy, the old city seal, the new city seal and the general historic Mission system with The Capistrano Dispatch. Serra’s name is still depicted in the new seal on a Mission bell.

The city seal design was recently changed to include depictions of Native American Kiicha huts, a horse rider, the Saddleback Mountains and other local features. Though the given reason for changing the seal was so it comes up better on a smartphone, criticisms over Serra and the Mission system’s past treatment of Indigenous people have come up over the years—points alluded to at times by city officials when fostering and discussing the new seal design.

In particular, Indigenous people and advocates have said using Native Americans to build Mission San Juan Capistrano and other California missions was tantamount to slave labor and that European colonization of the area wiped out Native American culture. Junipero Serra—who was canonized in 2015—is considered the founder of modern San Juan due to establishing the Mission.

Jerry Nieblas, another lifelong San Juan resident whose family spans generations in town, said the previous seal gave the message that people existed in San Juan Capistrano because of the Mission.

“It sort of dominated everything, and I was uncomfortable with that seal, because I went to Mission school. It always bothered me when I saw that statue,” Nieblas said. “I remember in second grade, I asked when I took a field trip to the front gates, ‘Why is this priest standing over this Native American boy? Why does he look so angry like he’s disciplining him?’ ”

Nieblas was told the priest wasn’t disciplining the youngster but, rather, was teaching the boy about God and the Catholic Church. Nieblas further wondered why the boy couldn’t face the viewer or stand side-by-side with the priest in the old seal.

Serra was “just a part” of the Mission system that was “destructive” to Native American people and wiped out traditions and cultures, Nieblas said.

“The language ceased. The religion ceased. Everything stopped for them,” Nieblas said. “What I try to explain to people, to educators when I’m giving them a tour: imagine somebody coming into your home, and all of the sudden said, ‘You can’t dress like that. We’re going to put you in a uniform. All this has got to go. We don’t want you to live here anymore. We want you to change your name. We don’t want you to talk about your past.’ ”

Rios advocates for ongoing dialogue about Serra, the Mission and San Juan history.

“I’m not a cancel culture guy. I don’t like the cancel culture,” Rios said. “We learn from that history. We talk about that history. I think these people who are controversial or may have done some questionable things in the past, we shouldn’t cancel them. We should perhaps put them where they belong proportionally and then allow a discussion to follow through with it.”

“I love different parts of it, most of it. I love the oranges, because we used to ride our horses and be able to eat oranges,” Gigi Nieblas said. “They were plentiful. Orange trees have always been a part of this area since I’ve been here.”

Gigi Nieblas also likes the depictions of walnuts on the new seal, because her ancestors took care of walnut groves at what is now The Ecology Center.

“This is nailing it, in a lot of different ways. I’m in tune with Saddleback. Saddleback is prominent,” Rios said. “I like that, because of all our history that goes there and all the people that would go up there.”

Other people familiar with Serra shared their perspectives on him when contacted by The Capistrano Dispatch, including JSerra Catholic High School President Rich Meyer.

Serra left a legacy through his contributions to Southern California and as the “spiritual father” of the West Coast, Meyer said. JSerra is “blessed” to carry his name, Meyer said.

“We’re really unfazed,” Meyer said of criticisms of Serra. “His legacy is a testament of someone who gave his life to others.”

Serra should continue to be honored “unequivocally,” and his memory is depicted “everywhere you look” in San Juan Capistrano, Meyer said. Serra did a lot of good for a lot of people and displayed fortitude, Meyer said.

There are no plans to change the JSerra school name. Meyer declined to comment on the new San Juan seal, as he was unfamiliar with it.

Janet Bartel, a volunteer historian at Mission Basilica San Diego de Alcala, also spoke in defense of Serra. Along with being a “major figure” in the development of California’s missions and the Western United States in general, Serra was involved in educational and philanthropic enterprises, Bartel said.

“These missions are recognized all over the world,” said Bartel, who has been involved with mission history for 37 years, served on the boards of California Mission Studies Association and California Missions Foundation and is not of Native American descent.

Serra advocated for Native American rights and a “peaceful transition” to improve the lives of Native people, Bartel said.

People wanting to have contact with each other is human nature, said Bartel, who brought up that she has pictures of her children embracing sports coaches as an example of how she feels that image is not derogatory.

“He did everything in his life to protect the Native people,” Bartel said. “The Native people were hunter-gatherers and probably considered their life idyllic, but Father Serra could see the future and saw it would not always be idyllic.”

In response to criticism of Serra, Bartel said very few people consult primary sources of Mission history and that critics don’t know the exact source of where negative claims originated. Abuse and the downfall of Native people began during the Gold Rush, Bartel said.

Bartel said Native American people are welcomed and given food and water when they show up to protest.

“It’s their holy ground,” Bartel said. “There is never a time when they aren’t welcome at Mission San Diego.”

Controversy over Serra led to Serra High School—a continuation school in San Juan Capistrano—reverting to its original name of Capistrano Union High School in 2021. The Capistrano Unified School District Board of Trustees voted to enact the change, which was well-received by school and local community members.