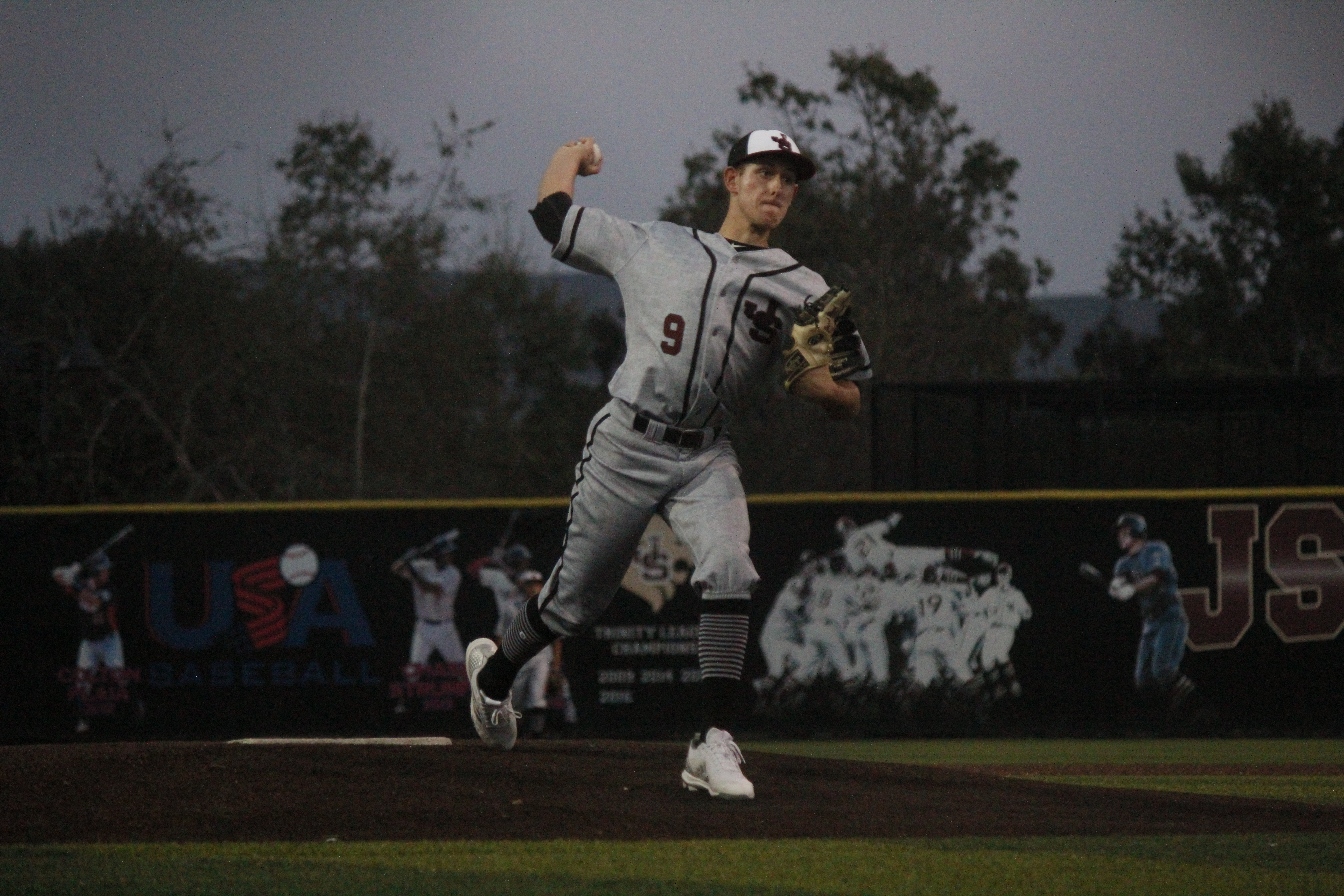 With Late Home Run, Play at the Plate, JSerra Holds On in Boras Classic Opener

SAN JUAN CAPISTRANO – It had been 11 days since the JSerra baseball team took the field, but the break didn’t break the Lions’ winning ways.

Starting pitcher Jake Reed threw five shutout innings, and shortstop Michael Curialle hit a home run in the sixth inning and gunned down the potential tying run to end the game in the seventh as JSerra defeated Newbury Park, 3-2, to take a first-round game in the Boras Classic on Tuesday at JSerra High School.

“It was a fitting ending to a long day,” JSerra coach Brett Kay said. “I was pleased. I thought we had some good at-bats against a tough team and a tough guy on the mound. To come out victorious on the first day of the Boras Classic, I’m happy.”

JSerra will host Simi Valley in the second round Wednesday at 6 p.m.

Curialle’s home run led off the sixth inning for the Lions and gave JSerra a 3-0 lead. It was much needed insurance at the time that proved invaluable later.

In the seventh, Newbury Park (6-5) finally got on the board. A sacrifice fly with the bases loaded was inches away from being a grand slam but still scored one run.

With runners on first and third with two outs, a single by Carson Lambert scored the runner from third and sent the runner at first sprinting around the bases. Christian Rodrigues fielded the ball in left, hit Curialle for the cutoff and Curialle spun home to Paul Roche. Roche applied the tag on the diving runner for the final out of the game.

“That was a great finish,” Kay said. “Mike threw a rocket in a big situation. I should’ve read his at-bat more and shifted our outfield so it wasn’t such a long run for him, but I thought our guys executed very well.”

FINAL: JSerra 3, Newbury Park 2. @JSerraLionsBB celebrates as the Lions gun down the tying run at the plate. What a finish here in SJC. JSerra moves on to face Simi Valley here tomorrow in the 2nd round of @TheBorasClassic. pic.twitter.com/BXCilDnY6N

With spring break and Holy Week preventing the Lions from getting on the field, JSerra had to shake off some early rust.

Reed was high in the zone in the first couple innings, but the senior righty collected five strikeouts in five innings and allowed only four hits. Reed hasn’t allowed an earned run all season.

“I came out a little slow,” Reed said. “Defense, we played well throughout the whole game. I struggled throwing strikes, but the defense was great behind me. We got through it.”

JSerra grinded out two runs in the fourth.