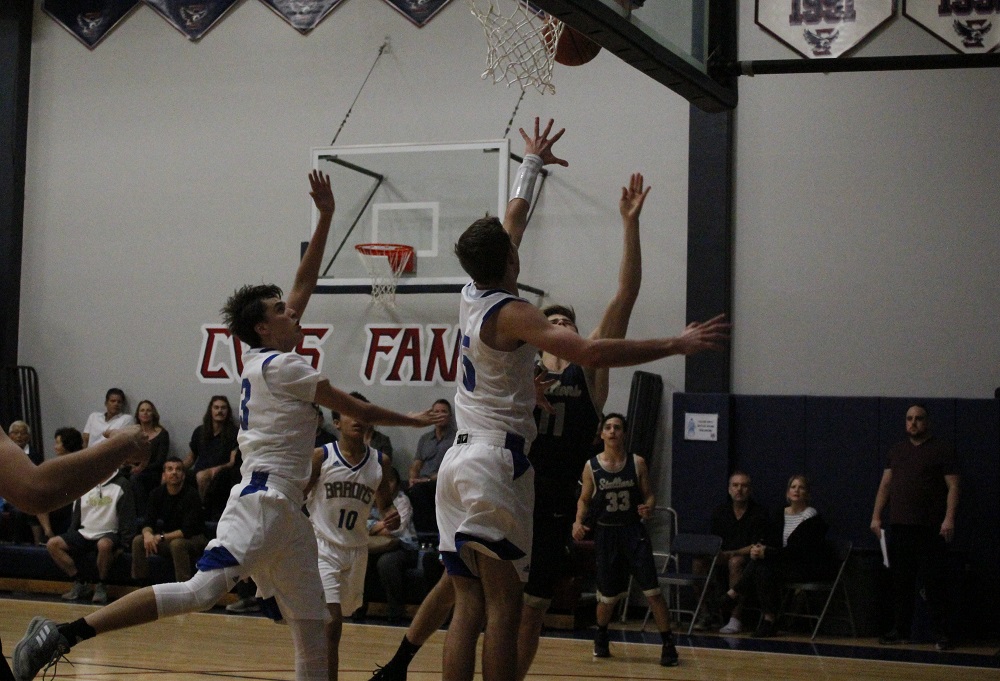 San Juan Hills coach Jason Efstathiou was confined to a small square of carpet near his bench. The Stallions sitting on the bench had their feet in play on the court. There’s nowhere else to go.

The close and cacophonous atmosphere extended to the game where San Juan Hills and Fountain Valley were tied after one quarter and within four at halftime. And when it looked like Fountain Valley was going to storm off with the game, the Stallions planted their feet and pushed the other way.

San Juan Hills went on a 23-4 run from the third quarter to the final buzzer to turn a nine-point deficit into a 10-point win over Fountain Valley, 49-39, in a CVCS Eagle Classic game on Wednesday at Capistrano Valley Christian.

“Everyone knows he’s our guy,” Efstathiou said of Weingard, “and I told him that’s the expectation. He’s going to be a guy that’s going to have to put up 20 a night.”

Weingard scored 13 points in the fourth quarter as the Stallions held Fountain Valley without a basket until midway through the final frame. It was quite the turnaround from the second quarter where the Stallions only scored four points on one field goal make.

Efstathiou credited bringing Cameron Freestone in the game at center. Without Cade Albright, who was on an unofficial football visit to BYU, Freestone brought the size for the Stallions.

“We were definitely giving up some size today,” Efstathiou said. “But Cameron came in and really helped stuff them in which allowed Weingard to get a lot of rebounds.”

San Juan Hills is in a stretch of five games in five days.

The Stallions won their Eagle Classic opener over Cajon on Tuesday, 62-55, then lost a nonleague game to Newport Harbor on Wednesday, 84-54. San Juan Hills plays Mission Viejo for first place in Pool B in the Eagle Classic on Friday at CVC and will play in a championship round game on Saturday at CVC.

San Juan Hills will play Godinez in the North-South Challenge on Dec. 21 at Tesoro High School before the holiday break.